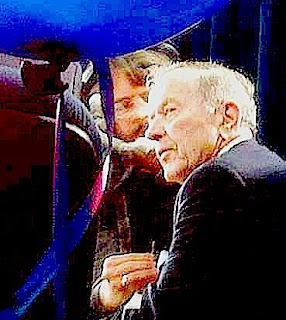 According to Ray Metcalfe, the prosecution of ex-Sen. Ted Stevens should have kept away from the deals between the Stevens family and Allen. Metcalfe certainly has a lot of detail about Stevens' dealings with other unsavory characters.

The question of how the prosecutorial misconduct in the Stevens case might play out has been looming since October 2, 2008, when it became public that Stevens' attorney, Brendan Sullivan had been informed that information had been withheld from the defense, and that an important statement by Allen had been redacted from material turned over to the defense.

The decision by U.S. Attorney General Eric Holder comes after a new prosecution team discovered a previously undocumented interview with the star witness in the case that sharply contradicted the most dramatic testimony in the four-week trial. The information had never been turned over to the defense, the Justice Department said in its motion.

The newly discovered interview wasn't transcribed in the usual way, the Justice Department said this morning. Rather, it was discovered in the notes of attorneys who questioned Allen on April 15, 2008.

"The notes of the April 15 interview indicate that Bill Allen said, among other things, in substance and in part, that he (Bill Allen) did not recall talking to Bob Persons regarding giving a bill to the defendant," the Justice Department said in its motion to dismiss the case. "This statement by Allen during the April 15 interview was inconsistent with Allen's recollection at trial where he described a conversation with Persons about the Torricelli note."

The interview notes also say that Allen thought the market value of Veco's work on Stevens' home was about $80,000. The government introduced evidence from Veco's bookkeeping that suggested it was worth about $250,000, though the judge threw out some of that evidence because it proved to be wrong.

"Defendant Stevens was not informed prior to or during trial of the statements by Bill Allen on April 15, 2008," the department's motion for dismissal said. "This information could have been used by the defendant to cross-examine Bill Allen and in arguments to the jury."

In his statement, Holder didn't say precisely what he meant by the "interests of justice" dictating that Stevens not undergo a new trial. But Stevens' lawyers had argued that government misconduct was so extreme that the only remedy for the judge was to completely dismiss the case.

The Alaskan who wrote most scathingly about the prosecution's conduct in the Stevens trial was ex-U.S. Attorney, Wevley Shea. I haven't yet read a statement by Shea, but one is surely coming.

Back on October 2, when defense attorney Sullivan's initial complaint was written about, there was some concern that the information had been withheld by somebody in the prosecution team, so that it would later be discovered, thereby throwing the trial. I've never put much stock in that, and the discovery of the April 15th, 2008 notes points toward more incompetence, rather than intentional misconduct, either to throw the trial for Stevens or to unjustly convict him.

Rep. Don Young, Sen. Lisa Murkowski, Sen. Mark Begich and others have issued statements. Sen. Begich should have taken far more care in his statement than he did:

I always said I didn't think Senator Stevens should serve time in jail and hopefully this decision ensures that is the case. It's time for Senator Stevens, his family and Alaskans to move on and put this behind us.

Amanda Coyne has come down very harshly on Sen. Begich, in an op-ed at the Alaska Dispatch:

Easy for Begich to say. Begich, of course, beat Stevens in the election by just a few thousand votes. Makes you wonder what the outcome would have been had Stevens never been charged in the first place, had he not had one hand tied behind his back while running against Begich.

A man's rights were grossly violated by the federal government. As our senator, it's Begich's responsibility to protect Alaskans against such violations and to ensure that those who do so are held accountable. But the way Begich's tepid response is worded , it makes me wonder if he'll extend that protection only as in so long as it doesn't negatively affect him or his political career.

In contrast, this is how Sen. Lisa Murkowski responded today: "Our nation is governed by the rule of law, and violations of our civil liberties cannot be tolerated. Prosecutors and law enforcement have the power to bring the full weight of the government to bear on individuals. If they are willing to bend the law, they put all of our civil liberties at risk."

If Begich is not willing to stand up for one Alaskan after such a gross miscarriage of justice has been committed, then we're all at risk, and maybe Alaskans should band together and demand, at the very least, that Begich take a constitutional law class (at the college level). At most, maybe we should demand that it's "reasonable" we rethink the election that propelled him into office and do anything but put it behind us.

I agree with Coyne on this. Andrew Halcro puts his view more concisely:

moving on after a faulty conviction that cost you both your career and your reputation is more easily said than done.

Ray Metcalfe says that he is going to be writing about this, and providing more details on how a crooked Ted Stevens earmark regarding base housing at Elmendorf remains a sore thumb in the eye of several Alaska politicians, including ex-Sen. Ted Stevens, and his replacement, Sen. Mark Begich.

My view, in brief, is that it was a mistake for the Department of Justice not to heed Metcalfe's advice to pursue different lines than the disclosure form violations against Stevens. They did this to move the trial from Anchorage to Washington, DC. By doing that, they assured a conviction, even if unjust. Had the trial remained in Alaska, on different grounds (believe me, they are there), and left the case in the very able hands of Prosecutor Joseph Bottini, we wouldn't be looking at this huge stinking pile of bullshit and political debris.

there's no practical way to reverse the election of begich in view of this development. other than some hollow superficialities what would you propose?

sounds like a bunch of churn to no progressive result.

besides, stevens only got his seat because nixon's security apparatus assasinated mark's dad. the great wheel has turned.

"violations of our civil liberties cannot be tolerated"? Who does Lisa think she's kidding? She voted for the Graham amendment to the Military Authorization Bill of 2005. You know, the one that declared habeas corpus null and void?

Didn't Ted insist that the trial be held before the election.

If true, it proves to be careful what you ask for

Step back and take a look at what we have here. Sacrifice. Ted Steven's political career was at an end with the Dems taking political power in WADC. Feds were buzzing around Alaska like flies on a rotting corpse. Next in line was Ben Stevens and the massive multiple fish crimes and scandals about which most Alaskans understand very little, and all of which originated with illegal actions by Senator Ted Stevens and his minions. Now, Ted is not a Senator, so he's no longer a political target. The Feds have lost all credibility in prosecuting Alaskan politicians. Ben and his crew are safe, as are the remaining unindicted corrupt bastards. Weyerach's trail will be cancelled. Vic, Pete and the boys will ask the new DOJ for redress and be sprung. The DOJ will again turn its blind eye to Alaska, and why not? To date, of the 14 or so fed convictions, not a single count filed by our own state. If we refuse to govern ourselves, why should Uncle Sam give a shit what becomes of a backwoods colony anyway? We are truly fucked; please pass the anal lube.

I can tell you that this will have little impact on what the Fed DOJ has cooking, except to be more careful. Far more careful.

So, for those of us that thought, oh wow, the Bush Administration really *is* moral and ethical and bipartisan; they're prosecuting Ted Stevens.

Well, no. Looks like it was rigged to fail. And Holder's hands are tied.

So Ted got off. He can join the ranks of O.J. Not innocent, guilty just wouldn't stick.

At least California put Randy "Duke" Cunningham in prison. I guess he'll be up for parole soon. Wonder if Fox News will offer him a token job?

We all need and deserve justice meted out in a lawful
manner. As Philip says, Holder has a lot of clean-up
to perform in the Justice Dept. Some of that cleaning
should also include bringing those guilty of corruption
to trial.

anon #1, is that revisionist history? i recall that young got his seat after nick begich's death, not stevens.

i was trolling. refreshing that somebody actually pays some attention to history. assuming that all the superior and/or self absorbed creatures weren't just ignoring me.