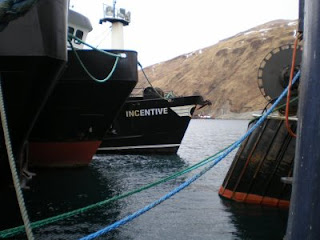 Anchorage , Alaska 19:45 hrs. PST - The North Pacific Fishery Management Council voted tonight on the contentious issue of Bering Sea Chinook Salmon Bycatch Management in disregard of the U.S. State Department's warning that its final action might not meet the obligations of the Pacific Salmon Treaty with Canada. The Department of Interior's Fish and Wildlife Service's representative, Greg Balogh, also warned that the final motion does not adequately concur with obligations to address subsistence and rural community needs among peoples of the Yukon River and Western Alaska specified under the Alaska National Interest Lands Conservation Act (ANILCA).

The Council's motion adopted fishing 'industry' proposals — some made during this last meeting on a long contentious issue — before full review of their effects could be made by the general public and 'non-industry' players. The limits on restrictions for the allowable amount of annual Chinook (king) salmon catches by the pollock trawl fleet offshore of Western Alaska were top-capped at 60,000, with a package of "incentive plans" included, and with a lower limit of 47,591 fish per year. There were other provisions included for performance standards, and the number of years that the cap could be exceeded in a range of years without dire circumstances, such as shutting down the pollock fishery to certain sectors.

It's a bit confusing in the totality of motions and sub-motions, and much like instituting a 'cap and trade system' approach, but there was no doubt this was the pollock industry's day.

The State Department's representative on the NPFMC, Nicole Ricci — an alternate for Amanda Johnson-Miller of the Office of Marine Conservation, Bureau of Oceans & Int'l. Environmental and Scientific Affairs — strongly stated objections before the vote. Ricci said, "I don't see how this [motion] is a bycatch reduction." She added that "a thousand years" of in river subsistence lifestyle fisheries is going to be "allowed to be overrun by a fishery that's only been around less than … a quarter of a century!" — referring to the pollock roe-stripping, surimi food paste, fillets and blocks fishery.

NOAA general counsel, Lisa Lindemann advised the Council that any plan they put forward to the U.S. Secretary of Commerce (now Gary Locke) will have to undergo a review in light of section 304 of the Magnuson-Stevens and related fishery acts, and other applicable law. Lindemann stated, "That means the State Department makes the final determination," with regard to compliance with treaty obligations.

One key component swaying the vote was the addition of a provision saying that "Each sector will be annually evaluated against a performance standard. If the sector's annual Chinook salmon bycatch exceeds the sector's portion of the annual scenario 2 (i.e. in the absence of an approved industry incentive plan) in any 3 years within a consecutive 7-year period, all vessels within that sector will operate under annual scenario 2 in all subsequent years." This apparently would restrict the use of incentives and trading of credits. That may be a somewhat useless provision when one plainly reads the following sentence, "Any vessel or Community Development Quota group that fishes under the opt out backstop pool will not be evaluated or included in annual calculations of a sector's performance standard." After all, the increasing amounts of quota being purchased by CDQs is for many members of the fishing public one of the greater problems in a shift of market powers.

Other reporters were left in the room to interview those natives who might be disappointed in the decision today, because the real story is the audacity of a unanimous vote in spite of all those warnings and concerns. But as Council chair Eric Olson — a Western Alaska native himself, who voted for the motion because of newly incorporated performance standards — stated, "It's hard to support a 60,000 hard cap at the high end" and this pact with industry represents "a non-binding contract... a problem de jure." Olson was concerned about previous Council actions where that trust was misplaced, and left off with a concluding remark that "this is far from over."


A public watchdog and advocate for fishermen and their coastal communities, Taufen is an "insider" who blew the whistle on the international profit laundering between global affiliates of North Pacific seafood companies, who use illicit accounting to deny the USA the proper taxes on seafood trade. The same practices are used to lower ex-vessel prices to the fleets, and to bleed monies from our regional economy.

Reprinted with permission from The Alaska Report © 2009

Update - Tuesday 6:00 a.m: Anonymous Bloggers has a great report on the meeting, written from the perspective of people who live in the lower Y-K Delta.

And Anchorage Daily News Rural Affairs Editor, Kyle Hopkins makes his debut as Wesley Loy's possible replacement covering fishery issues at the ADN. His debut might have been more auspicious had he not buried the money quote from U.S. State Department foreign affairs officer, Nicole Ricci:

"This has been one of the most disappointing things that I have sat through."

And Alaska Rural Affairs Coordinator, John Moller, who I saw wandering around the meeting through part of the week (he's an ex- advisory council member), in his debut column at the ADN, made no reference to this historic meeting.
Posted by Philip Munger at 11:10 PM