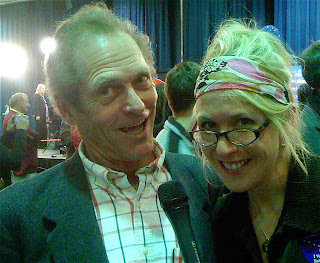 My first encounter with Alaska Governor Sarah Palin was in early 1991, at a Wasilla Planning Commission meeting. My impression was positive. Since then, the journey has been mostly downhill.

My first encounter with Alaska's most meteoric independent commentator, Shannyn Moore was in late July, 2007. I called her radio program from Seattle to read a statement from the Diane Benson campaign, regarding whether or not Diane might, in Shannyn's earlier words, "pull a Lieberman" and bolt the Democratic Party, should she lose to Jake Metcalfe in the 2008 Democratic Party primary for the AK-AL U.S. House seat.

In March and April 2008, the three KUDO-AM progressive talk radio hosts in Anchorage - Moore, Camille Conte ("C.C.") and Aaron Selbig, created radio history. From their KUDO platform, they helped turn an Anchorage municipal election toward the left, at an important time for the city, and for Alaska.

In the post-election shakeup at KUDO, Selbig was fired, Moore offered an untenable slot, and, fortunately, C.C. was kept. Since then, Selbig has moved to Homer, where he has become an award-winning newspaper journalist for the Homer Tribune. C.C. was recently given a major award by Harpers Magazine.

Moore has since "subbed" on the radio locally, been a feature on the Bob & Mark Show, and was MC at various local progressive events. With encouragement from me, and from her partner Kelly Walters, Shannyn started a blog. Kelly's help on that since its beginning in July, 2008, has been important. Last week, it was inspiring watching Kelly and Shannyn working together early Thursday afternoon, as we realized our predictions about the WAR vote were materializing.

Immediately after Sarah Palin was chosen to be John McCain's running mate, dozens of Alaskans with media and Palin backgrounds were called. Michael Carey, Richard Mauer and others from the Anchorage Daily News, for instance. Alaska Public Radio Network reporters had hours of national air time. After I published remembrances of conversations with Palin about science and millenialism, I was on a lot of talk radio, rightwing and left.

Moore ended up being on radio and television more than all the rest of us combined. Why was this?

The best answer I can find is in an interview she conducted on KUDO, just before Carrie Carrigan terminated her. It was with Watergate icon, John Dean. He was about to come to Alaska to be the keynote speaker at the Alaska Democratic Party Convention. APRN's Steve Heimel had already interviewed Dean the day before. Heimel began his radio career before Watergate, is one of Alaska's most resonant and resilient reporters, and is always well prepared for his interview. His time with Dean was some of the best Alaska broadcast journalism has presented. He got Dean to trust him and open up.

Moore's interview was even better. I was surprised, thinking Moore might be intimidated. She wasn't.

Instead, Moore gained Dean's trust immediately, got him to laugh at himself and at the craziness of American politics. He was disarmed and charmed. That was the day I realized that Moore's talent has enormous charisma.

Perhaps it is partially because I can be very abrasive and insensitive that I've not been sympathetic to others who have criticized Moore for the same. I'm 62, so the mold may be set. Moore is far younger, and she seems to now understand that the hard edge needs to be saved for the most important parts of interviews. Or articles.

Moore's presence on MSNBC, Air America and other outlets these past eight months, combined with the quality of her personal blog posts and Huffington Post articles, have become something unprecedented in Alaska journalism. Others have combined blogging and radio. Andrew Halcro is the best example. Dan Fagan has combined his radio niche, and an op-ed niche at the ADN similar to WAR's at the Times in the 80s and 90s. The Alaska Standard, Dan's foray into web journalism, is growing. Rick Rydell sells better-than-average Alaska scare-the-hell-outtaya books. Eddie Burke mugs feminists in the night, by phone and e-mail.

These past eight months, the growth in Moore's readership at Just a Girl from Homer has only been surpassed in the Alaska left blogosphere by that of The Mudflats. When at KUDO, Moore's following was mostly local, although her program had more web callers from Outside than other KUDO programs.

Moore's new audience is more female, more nuanced than any now responding to Anchorage AM talk radio. I listened to Saturday's program. Female callers praised and dissed her equally. Moore relished the feedback. What Moore will bring to KBYR is an introduction to being a program listened to widely across the USA. They might consider that, when seeking a promotion profile for sponsorship. This program might become big.

The slide of Palin's trajectory, combined with the rise in Moore's professionalism seeks a better metaphor than those Palin conjures. I've told Shannyn she reminds me in her sassy comebacks to some of Ginger Rodgers' lines in the great series Rodgers did with Fred Astaire, between 1933 and 1939. It has been hard for Moore to keep on coming back, looking for a chance to do what she loves - talk radio from a progressive viewpoint. She's had to struggle to prove herself capable of capturing a market dominated by guys far less adept, far less knowledgeable, and who couldn't spell "nuance," even if they knew what it meant.

It's like the line Faith Whittesley created, to describe how Rodgers dealt with Astaire. "Ginger Rogers did everything Fred Astaire did, but she did it backwards and in high heels."

KBYR should be applauded for giving Moore this opportunity. They do things one way. Moore has usually done them other ways. Moore and Anchorage media has been like that. It isn't so much people don't see eye to eye, as that they visually see the same event differently. How's that for nuance. Or bullshit...?

Anyway, speaking of nuanced differences, here's to Shannyn and Kelly:

whoever had the idea to put her on a talk show gets an A for vision and clairvoyance. she deserves the acclaim. randi rhodes said the idea of an all-liberal station/network is a flawed premise -- that a show like shannyn's would do better sandwiched between two right wingers. maybe KBYR will have the sense to move her into a Mon.-Fri. slot?

Well done Philip. You nailed it, in all ways. Thank you so much!
Maybe KBYR will think about it. Lets see how the next few weeks go.
Thanks again for the profiles.

If you heard the show on Sat and want to rate it, go to
radioratingz.com/

Make sure you select the KBRY rating and NOT KUDO

Thanks for the very flattering piece on Shannyn.

Several years ago, I emailed Rich McClear after he mentioned, on KUDO, he was seeking a local talk show host. I told him I knew the perfect liberal undiscovered talent!

My partner Shannyn has always used her amazing quick wit, intellect and charisma to discuss politics and social issues.

She has that rare ability to both inspire and challenge neighbors, friends and acquaintances to think about things in a different way-usually around the firepit in the back of our home.

Those fireside chats usually wound up going to the wee wee hours of the next morning.

I am thrilled she is back on local radio and has found a new home at KBYR AM 700. Hopefully they will see what I always have-Shannyn is a sensational natural talent and deserves a M-F format.

Thanks for keeping the flame lit Phil.

Where were the Tea Baggers when Bush was driving us into dept?

Love it! Can't wait to hear you again next week.

Phil...that was such a wonderful tribute to Shannyn. I found her...mudflats, you and the rest of my Alaskan pals the day that McCain announced Palin as his albatross.

I am greatful daily...for all of you. What a wonderful tribute to Shannyn..and I am excited to listen to her on Saturdays. I couldnt stream it this past Sat., so have to look into what the issue is, so that it doesnt happen again.

Shannyn is great - bright, articulate. I love watching her on KO and this is a terrific opportunity to get her message out.

Thanks for this article. Shannyn Rocks.

Here is a streaming link for KBYR that works. Hats off to CaliGirl!

Good Lord, comparing Moore to Heimel is a bit of a stretch.

Heimel was doing his thing, probably before SM was even born.

The difference is that he's a real journalist, he doesn't wear his politics on his sleeve, although some may argue that.

SM is a commentator, a talk show host.

There is a BIG difference.

If you've ever worked in a real news room you'd know what I mean.

the thing is, heimel himself is on board. he subbed for shannyn and camille conte a few times on KUDO. i'm pretty sure he wouldn't say anything similar. and real news rooms are on the endangered list now.

I've never worked in a "newsroom," but I was news director of KRAB in Seattle, one of the USA's GREAT news stations (briefly) and news and public affairs director of KLAM in Cordova for while.

I described Moore as a "commentator." Heimel is a close friend, and I am sure he would agree with much of what I have observed in this profile.

What the fuck is your point?

My point is that your writing tends to be just a bit, oh.....over-dramatic....at times.

I find it amusing that she needs to be in radio that badly that she'll take a gig anywhere, Yoga is satanic.

Ask him about it some time.

I hope they're paying her well.

Oops, that should read, that Justin McDonald, her new boss, believes that practicing Yoga is satanic.

Yep, the guy is a real winner.

commercial radio does not necessarily suck. i quit listening to NPR in 2004 [after they sacked bob edwards] and never went back. they participated in the run-up to invading iraq as much as the rest of the mainstream media. and gave plenty of air time to right wing pundits who were parroting the administration line and who turned out to be wrong about everything.
[you'd think the NY times would have been immune. judith miller was a 'real journalist', remember?]
left wing talk radio has been a little bumpy and uneven in the last five years but they and the blogs were the only ones challenging the bush administration. 'ring of fire', mike malloy, randi rhodes, 'morning sedition', sam seder, ron reagan, thom hartmann -- all fantastic.
the old KUDO lineup was very wonderful because they had seven hours of local programming during prime time. KSKA during the same hours, except for APRN news was switching between satellite feeds of pre-recorded national news programs. i don't find that very compelling.
the only public radio i can take presently is KWMD.