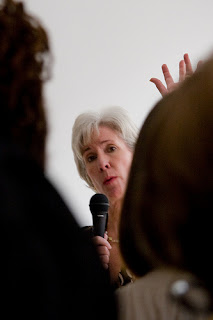 Yesterday's confirmation of Kansas Governor Kathleen Sebelius to be U.S. Secretary of Health and Human Services ends the search by the Obama administration for a competent person to head this agency at a time when so many issues under its purview are very important to the future well-being of our country and its people.

Alaska Gov. Sarah Palin's squad of cheerleaders tried to stop the confirmation in its tracks. Who the heck do they think they are?

Erika Bolstad of McClatchy writes today from Washington, DC, that, "it's a ready-made online army for Palin to muster up if she so chooses. So far, she has not."

Bolstad goes on to include the blog Conservatives4Palin and Sarah Palin Radio in her quick look at what the Anchorage Daily News headline to her story calls "a Formidable Army on the Web."

What a load of crap! First of all, they lost. They had no impact on this nomination that can be discerned. The article fails to cite such an impact. Did they change a single Senator's vote?

Bolstad's article notes that Conservatives4Palin gets "upward of 5,000 visitors a day." Uh, that sometimes happens at Progressive Alaska, Erika.

The Mudflats, Just a Girl From Homer, Celtic Diva's Blue Oasis, The Immoral Minority, Alaska Real, Bent Alaska, The Alaska Report and Anonymous Bloggers, when put together, probably have far more visitors than all the Palin shrines in the world, including the ADN's.

Interest in Sarah Palin is rapidly declining nationally. During the fall campaign, as many as 20 Sarah Palin YouTubes were showing up per hour, day in, day out. Some of the more sympathetic videos were getting scores of thousands of hits. None competed in view counts with the hilarious ones, like the complete turkey video (now removed, but not before it was viewed almost 3,000,000 times!), or versions of the Sarkozy prank.

Now, though, Palin videos are coming in to YouTube at about ten or less per day. Most are anti-Palin.

With the poor showing the governor made during the 2009 legislative session beginning to sink in and the continuing erosion of GOP power in the U.S. Congress (Snowe and Collins next?), Palin's base will look more and more like the old Confederacy did in early 1862.

I can hardly wait until it looks like the old Confederacy did in early April, 1865.

image - Lindsay Beyerstein
Posted by Philip Munger at 8:59 AM

i am head over heels in love with the republican party death spiral.
it's a great blessing bestowed upon this country. it's everything i ever hoped for. maybe alaska won't be ten years behind the trend this time.

Right on Clark. Death spiral it is. The buffoonery of the Republicans and their spokesman Limbaugh is great theater. Politico yesterday said it would be at least three presidential elections before they pull their heads out. I think that is wishful thinking.

I suffered through 8 years of bush, and now I want my schadenfreude, and maxi-size it please!

I want a book by Levi with all the dirt, I want an expose article in The New Yorker by Becki Donatelli, I want all the funds in the so-called "Alaskan Fund Trust" to be stolen by John Coale and given to the Scientologists.

There were several stellar comments in this article. Since McClatchy OWNS ADN, I wasn't surprised, however I found it funny that these paragraphs were at the end of the story:

Last week, Team Sarah called on its members to phone the Senate Finance Committee to voice their objections to Sebelius. An estimated 40 people called in opposing Sebelius' nomination; it's not clear whether all of the callers were affiliated with Team Sarah. But twice as many people called in supporting the Kansas governor after word of the Team Sarah effort was posted on the left-leaning Huffington Post Web site.

On Monday, Team Sarah sent out an action alert to its members, asking them to call the office of Sen. Sam Brownback, R-Kan., and urge him to vote against Sebelius' confirmation.

The office logged about 750 calls from Kansans opposing Sebelius' nomination, said Brian Hart, Brownback's spokesman. About a dozen identified themselves as being connected to Team Sarah — Brownback's office did not log the number of calls from people outside of Kansas.

THIS on ADN - any thoughts on how 3,000 people contributed over $7 MILLION dollars at the Right to Life dinner? Who were the attendees? Where did all this money go????????


Gee duper, that must be WHY she was able to pull in $7,000,000 in donations last month for a speech that lasted less than an hour...do ya think?

Formidable in their own minds.

Can't wait to hear Sarah's "endorsement" for John McCain's next term as senator from AZ.

Bolstad's article notes that Conservatives4Palin gets "upward of 5,000 visitors a day." Uh, that sometimes happens at Progressive Alaska, Erika.And I'll bet half of THOSE are from curious folks like myself, who like to go over there and lurk and read, just to see what inanities they're fulminating about now...

I hadn't thought of that.

Or reading it so their boss doesn't have to. That's what I hear half the Alaska Standard readers consist of.

You turned me on to Alaska Standard, Phil! I can't get over how weak, tired and worn out their arguments have become. "Socialist agenda!" "Big Government!" "Free Markets!" "Liberal Media!" "Traditional Marriage!" "Anti-Development!" "Tax and Spend!" "Weapons ban!" They consistently trot out all the same old talking points, but they don't have a intellectually honest leg to stand on anymore. Just fear, generalizations and name calling.

Now the AK Standard staff writers are all following the "Mr Teleprompter" theme, but in comparing GWB's and OB's press conferences, discrediting their arguments is kinda like shooting down clay pigeons.

I asked Dan that back when he started the site. He wrote that it was from selling illegal drugs, but that doesn't quite ring true.