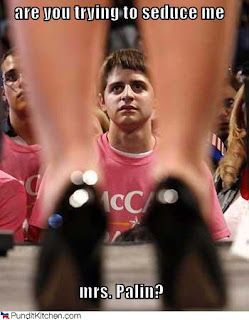 Alaska Governor Sarah Palin's post-legislative session press conference was a mixed bag. Palin, after her introductory, self-laudatory remarks, had one commissioner after another support a narrative that really doesn't exist. Hers.

The commissioners are basically good people, though.

They felt uncomfortable in the setup. Each had to praise the money allocated during the session, but it couldn't conflict with the way she wants to leave it impending on what parts she will veto. And this includes the disputed third of the Obama Federal stimulus package.

Their enthusiasm for results of the session was mostly forced. Like you and me, they're hostage to a person who is as likely to turn on them next week for a small deviation from her vision, as she's likely to ignore them.

Denby Lloyd, the Commissioner of Fish & Game, had one of the trickiest spin jobs. Alaska's state supervised F&G paradigm is on the edge of a precipice, especially on the Yukon and Cook Inlet. He complained about lack of science funds from the Feds this coming fiscal year. But he's not about to listen to what real scientists might find, and if you want to know what his scientists say to each other, you'd better be ready to fork over hundreds of thousands of bucks.

Palin was first confronted by KTUU's Rhonda McBride, regarding when the public will know about Palin's decisions on key educational funding that will rely upon Federal stimulus package money. Palin's response was:

Well, there isn't not a single decision, uh, the stimulus package. We're gonna go by, uh, on that particular one. We too will be searching for that hard and fast deadline to reply, and, uh, when I refer to this as an ever-evolving stimulus package, as lawmakers will admit to, uh, also, it's very tough to nail down the Feds on all of their requirements, including deadlines for applications, and so we need to continue to work on that.

After forgetting to say "shovel-ready," Palin deferred to Karen Rehfeld, Director of the OMB, who knew the answer, but seemed to have to disambiguate, so as not to disturb Palin.

For Palin, the press conference went downhill from there. The meme she has developed about looking at every Federal dollar on a case-by-case basis, was played. But the press then asked about her spurned Attorney General nominee.

The Governor was asked, "Can you tell us who made the deliberate misinterpretations regarding Mr. Ross?"

Uh, members of the public who came forward with, uh, you know, the blogosphere, and the, in the e-mails back and forth, uh, and claiming that Mr. Ross did this or did that, and, uh, that he very easily and accurately refuted the lies told about him but, uh, you know, uh, once a bell is rung, it is really tough to unring the bell. Very unfortunate and unfair for any public official, anybody, to have lies told about them. It's sometimes tough to correct those lies in a timely manner, and the damage is already done.

The reporters didn't let her down lightly. The banter back and forth is fascinating to me, especially, since she accused Alaskan bloggers of lying. Several times.

Pat Forgey's Juneau Empire report is the only traditional media mention of this I've yet read. There may be others.

The reality of the Ross rejection is complex. Palin's lack of realization that she chose an eminently unqualified person for the second most important job in her administration may actually be beyond our governor. But her continuing blame game against citizen activists in Alaska may prove to be her "Tailgunner Joe" moment.

She couldn't come up with any accurate information to refute a question her staff knew she might be asked. If they prepped her, they failed in making an impact. If they didn't, that different failure proves a number of points about the narcissistic nature of this administration's approach to Alaska affairs.

You can watch the press conference at Celtic Diva's Blue Oasis.

Part 6 is the one in which she lies about what constituents and activists did in the WAR battle.
Posted by Philip Munger at 10:56 PM

I think the word is narcissism.

Based on here garbled speech pattern, she could be the next president. Remember W.

Gov. Palin has proven time and again she has so little depth of knowledge in most area's that she must rely on others to "explain" things when she is asked questions. It is absolutely disgusting that someone in her position has so little information of the issues on which they should have even a basic understanding of.
I was most amused at the press calling her out so to speak on her lies about claiming that it was the bloggers and private citizens who told lies about W.A. R. which caused him to lose the confirmation process.

I think one of the most telling of responses to her from a reporter was the statement:

“You’ve probably answered it as much as you’re gonna, Governor.”

Those who have stated that the Governor tosses out "word salad" could not have been more accurate in their descriptions. She mangles sentences, her grammar is horrific, and shows a true lack of understanding on language structure as well as a lack of knowledge on how to communicate with others. This is nothing new but with her supposed "journalistic" background it was rather surprising the first time I heard her speak "off the cuff".

Phil,
My guess is that her staff did try to prep her.

Her "pageant queen" answers you've quoted underscore her inability/unwillingness to do any homework, no matter the subject... even though she might then seem as though she knows what she's talking about.

Wow, gotta love Palin's response! I had to read it three times to follow her cognitive lapses.

Her and Miss California should get together for a speaking tour.

Maybe her next nick can be Sarah Salad.