Laundry, correspondence, Costco, the North Pacific Fisheries Management Council meeting, performing in concert with the Anchorage Civic Orchestra, a meeting of Alaskans for Truth, and a poetry slam at the Alaska Wildberry Theater.

After a full week of meetings, professional and scholarly presentations and behind-the-scenes propagandizing by the Bering Sea Pollock trawler owners, individual testimony will start Sunday, and go for a while. According to a NPFMC staffer, there are more people signed up to speak - well over 200 - than at any other meeting of this regional council. Perhaps even more than at the Gloucester meetings that all but ended the rape of the Grand Banks and New England fisheries a decade ago.

It may be too late for the Yukon River Chinook ecosystem here, too. Scientific presentations seemed to be overwhelmingly slanted toward powerpoint projections of mathematical formulae, explained so tediously Einstein would have fallen asleep. The oceanography and fisheries professors I heard on Tuesday, Thursday and today could b marketed as a marvelous new sleep inducement product.

My feel of the place is that the by-catch is going to be reduced into the 60,00 Chinook area, give or take 10,000. Unless there is something explosively trenchant in the testimony, and that it is noticed, the hearings will result in a compromise that allows Alaska Natives and others along the Yukon and Kuskokwim rivers themselves, to be forced to squabble between their CDQ and traditional factions, as the river continues to be raped offshore, by rich Seattle guys, and their Norwegian and Japanese partners. They'll just get raped less. Not less often, though.


The meeting room at the Anchorage Hilton was packed at 2:00 p.m: 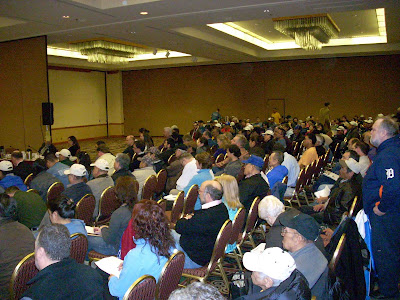 The rostrum from the rear of the room: 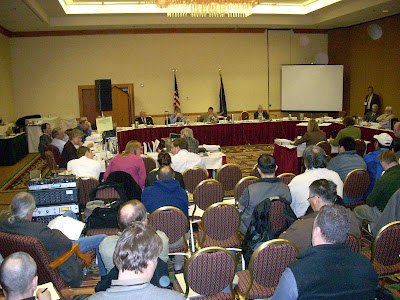 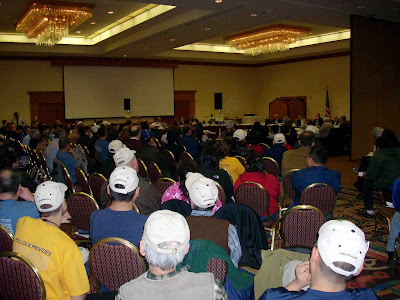 From the NPFMC hearings, I went to Bartlett High School, to play trombone and tuba in their young peoples' concert.

From there, it was off to the other side of town, for the first meeting of Alaskans for Truth since the Mudflats flap erupted. I had to leave early, so I left soon after my presentation.

I could hardly wait to meet back up with former Alaska Poet Laureate, Sheila Nickerson. She and I collaborated in 1991-92 on a song for an interesting work called Mass for Winter Solstice.

Sheila was a panelist and performer at State of the Hood, one of many poetry events happening this week. I missed the panel, but the performances started soon after I arrived.

Nine programmed poets and five poets who came down from the audience participated.

I need to go to more of these!

Diane Benson, who, along with Nickerson and Dauenauer, were the panelists earlier in the day, was challenged to take her artistic work more seriously by Dauenauer, when she lived in Juneau, working for the Perseverance Theater. Benson has told me Richard, and his family's influence, were vital, motivating experiences.

Here are Richard, Diane and Sheila: 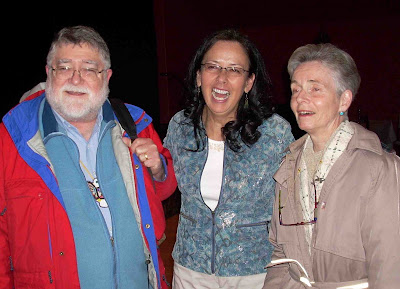 Here is a poem by Sheila Nickerson, that visits the Bering Sea, where this post began:

Once the Bering Sea was visited
by lesser Russian nobles.
Now, at the edge of the pack ice,
along this coast of crested auklets
and their cousins the parakeets,
we come seeking separate goals --
some, the short-tailed albatrosses;
others, the wandering tattler.
On the cliffs, those inns without mercy,
we climb above the red-legged kittiwakes,
look down on clouds of murres, fulmars.
At night, those of us up late and lucky
find storm-petrals resting on the deck.
Shearwaters run across the water, puffins
fly beneath. Miracles and rarity abound,
whiskered, horned, barking. Following,
we rise on white crowned waves, then
fall back, into the poverty of troughs.
Posted by Philip Munger at 12:22 AM