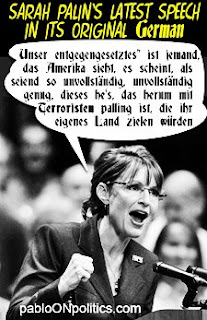 According to a poll released yesterday by politico.com, while President Barack Obama is riding a tide of popularity as we approach the end ot the third month of his presidency, Alaska governor Sarah Palin is seen as the country's least trustworthy politician. And, when it comes to Americans' trust of somebody to "find the right solutions," Palin is rated only slightly better than U.S. Rep. Nancy Pelosi:

In a new Public Strategies Inc./POLITICO national survey of 1,000 registered voters, Obama outdistances figures on both the left and the right in earning the public’s trust, with two-thirds of respondents saying they trust the president “to identify the right solutions to the problems we face as a nation.”

Among those choices, only the Democratic Party was trusted to find the right solutions by a majority of voters, 52 percent to 40 percent. Forty percent of those surveyed said they trusted the Republican Party, compared with 54 percent who did not trust the GOP.

Only 26 percent said they trust Pelosi, the lowest total in the group. Palin attracted the highest percentage of those who did not trust her at all to identify the right solutions, topping Pelosi 33 percent to 32 percent. Romney got a mixed reaction, with 38 percent of voters saying they trust him and 39 percent saying they don’t.

No wonder Palin wants W.A.R. She needs somebody to look at who is even more despised than herself.

Posted by Philip Munger at 2:14 PM

oooh, but where did Rush coome up? Inquiring minds want to know. Obviously ahead of GINO, but really....
Since he lurrrves her so much, I guess his boyos aren't even on board...

“Grab a Red Bull and a seat belt. Prepare yourselves for another episode of ERRATIC PALIN BEHAVIOR. (EPB)

Governor Gump has some sort of dyslexia when it comes to appointing a replacement to the seat vacated by Kim Elton. I saw the former Senator in Anchorage this morning. He is traveling with his new boss Interior Secretary Salazar. I damn near begged him to come back to Juneau, but knew it was no use. Kim Elton hates drama.

The procedure is this:

1. The party officials in the district of the vacated seat GIVE THE GOVERNOR SEVERAL NAMES.

2. The governor selects one of the names.

3. The Senators of the party nominated vote on confirming the new Senator.

WHAT has happened to Sarah? Seriously. Update? New to this?

1. The Juneau Dems gave the governor one name. Beth Kerttula. Beth is not on Sarah’s Christmas card list…really…so, Sarah said no.

2. The governor solicited names from the community…and picked Tim Grussendorf (a 3 week Dem).

4.The governor then decided she wanted the entire Senate to vote on his appointment…they all said, “Thanks, but no thanks!”

5. The governor then picked Joe Nelson….

7. The Mayor of Juneau, Bruce Botelho, brokered a deal to nominate Dennis Egan…son of our first Governor. John Harris, Speaker of the House and Beth Kerttula, Minority Leader, agreed with the nomination.

8. Today, the governor has ignored THE COMPROMISE of Eagan, and BURNED THE OLIVE BRANCH RIGHT ON THE TREE.

9. She has given THREE NAMES to the Senate Dems to choose one. They include Tim Grussendorf and Joe Nelson…two fish already thrown back. One new name is Alan Wilson. He is not a registered Democrat - so isn’t even qualified to serve as an officer for the Juneau Democrats, much less a Senator. He is a former president of the Alaska State Home Building Association, an anti-union organization. But ooooh, lookie, he is married to Sydney Mitchell, the owner of Shoefly. Yes, the one who sold the Governor a pair of red Double Dare Naughty Monkey pumpsthat had “Joe the Plumbers” sweating from Florida to Fairbanks.

SOOOOOOOOOOOO, Juneau….are you ready to revolt yet? Why don’t you line up like NAUGHTY MONKEYS and let the governor know what you think of her pick.

Dictatorships are easier than Democracies, but we’ve fought a few wars about that.”

This is really becoming fun.

I think Palin and the D's are going to play ping pong with this senate seat for the next year.


One less senator means that 5% less work gets done in Juneau.


I can't keep a grin off my face thinking about it.

This women has transcended banal and crossed over to evil. Who will rid you of this meddlesome bitch?

pleasr allow me to mangle mis quote a great American philosopher, Jon Stewart;
He said something like, '..When Europeans are outraged with their leaders, they take to the streets in angry mobs, here in the US, we express our disent by firing off emails in all CAPS."
RECALL ! IMPEACH ! WHATEVER WORKS!
GINO HAS GOTTA GO !1!