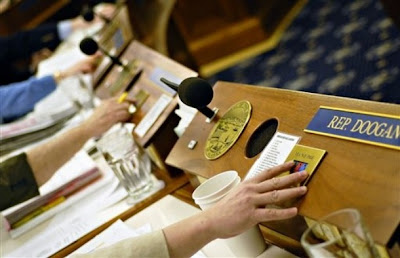 Today in Juneau, Rep. Mike Doogan (D - Spenard) was the only member of the Alaska House of Representatives to do the right thing. He voted against one of the most pathetically political pieces of legislation in Alaska history. I've called the office of my Representative, Carl Gatto (R - Palmer), to voice my disgust with his vote.

My wife says, "How could ANYBODY vote for that [legislation]. It's crazy!"

Here's to you, Mike!

Readers here know I've been very critical of Rep. Doogan lately. And I'm finishing up gathering information for a long essay on how the media has dealt with Rep. Doogan's use of government resources to reveal the identity of a pseudonymous blogger who was easy enough to contact through email.

But I thought I'd honor Mike by posting some of the better anonymous comments from this afternoon's Anchorage Daily News story about the house bill.

Here are some of Mike's pseudonymous defenders:

Apparently criminals run in packs and really do look out for their own. Our politicians must be convinced that they need to obliterate the justice department before any of their own corruption gets investigated.Yes, the DOJ really screwed up and may even have behaved criminally. But that does NOT excuse Ted Stevens for accepting the kind of gratuities (bribes) he was obviously accustomed to extorting.

Oh this is just great! Having solved all of the other problems we are faced with in this state (sarcasm intended), the AK Leggies want to honor a corrupt politician and request the federal government apologize to him. How about this: Ted Stevens apologizes to Alaska for his behavior that resulted in his trial?

Lets hope the governments response will be to refile the case and get it right this time....we all know he's guilty

What is wrong with Alaska Politicians?? Is a way now being paved for every Alaska politician to behave like Uncle Ted and be allowed to get away with it?? Stevens is a crook who didn't do a very good job of covering his trail of deceit and lost his Senate seat as a result. How sickening these people are who get voted into office in Alaska year after year and who then act as if the law doesn't apply to them!

After going through the comments, none of which yet praises Doogan for his courage and common sense, I realized that the ADN reference to his vote being the sole dissenting one was only brought up in an update.

Whatever. Progressive Alaska is happy to credit Rep. Doogan with having cast the only sensible vote in this matter. Hopefully, the evening news at 10:00 p.m. will be interviewing him on this, along with the rest of the pack.

My comment was removed from ADN on this stoooopid resolution as were hundreds of others.

After saying that everyone who voted for the resolution should be voted out in the next election, I recommended a medal for the brave soul who voted NO. Little did I know that it was Doogan. Even knowing that, I still have to give him credit. He CAN get some things right. Is he the only one who actually read that garbage?

Mike, you were a real prick in what you did to Mudflats but I must say, you got it right this time with this vote.

It's appropriate to praise children for not doing the bad thing that their peers are doing.

I refuse to praise Doogan like a child for not engaging in the ridiculous activity that his peers did.

I feel proud, :) My comment was removed from ADN on this stoooopid resolution as were hundreds of others.

After saying that everyone who voted for the resolution should be voted out in the next election, I recommended a medal for the brave soul who voted NO. Little did I know that it was Doogan. Even knowing that, I still have to give him credit. He CAN get some things right. Is he the only one who actually read that garbage?

And I thought my computer was screwing up, because it was only coming up with about three comments per page, and the total number of comments attached at the ADN site didn't come close to the 160-plus the story claimed to have.

as one of doogan's harshest critics over the whole mudflats deal, i join you, phil in congratulating him on this dissenting vote.
you'd think with all those lawmakers, many of whom are also attorneys there would be a little more nuanced understanding of what actually happened with stevens' trial.

Nope, your computer is fine. I was commenting soon after the article came out and there were already 136 comments. None of them were trashy, obscene, or any of the other complaints maeTharaS, caPharaS, C4P shoot at people who disagree with them. I always want to add a category to the Report Abuse List - Blind Followers :-)

Most of the commenters (with the exception of a few rabid TS supporters) were as outraged as I was at the thought the House would pass such nonsense, but most (I did read them all) were praising Mike for his courage in standing against this. Those early comments have disappeared.

I kept checking back and the pages grew but the number of comments kept rising and falling. (There were 17 pages at my last count) but only 180 comments. Hmmmmm!

I've been telling you this all along now, Doogan rocks !

I only wish he represented my district.

The problem with the ADN comments is that comments are hidden any time 3 people who don't like them mark them as abuse. This, of course, is itself abuse.

IMHO only ADN staff should be able to hide comments, but that would take a full time staff position at a time when McClatchy is laying off as many good reporters as possible. Lacking that, users should also be able to "unhide" comments, in order to counteract the wingnut censorship that's going on, but I don't expect Pat Dougherty to allow that.

This ability to hide comments means that in the future we're not going to see many comments critical of the Governess, since Team Sarah will mob the ADN to kill them.

I've given up on reading the comments, since the dittoheads all say the same crap, and it's not worth wasting the bandwidth to read them.

The Juneau Empire eliminated story comments entirely because of the nasty drivel, bigotry, and hate mail posted by the wingnuts, and they were right to do so. Unmoderated comment blogs just don't work --- a moderator is necessary to ban abusers and enforce civility.