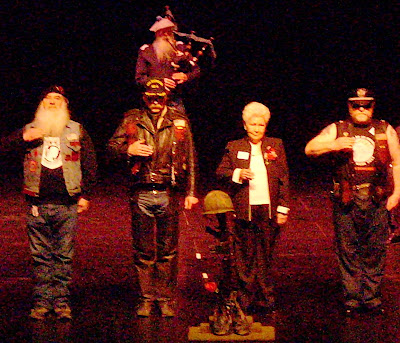 American Armed Forces Prisoner of War Remembrance Day is April 9th. Late this morning, at Bartlett High School, hundreds gathered in the auditorium, to remember and acknowledge our past and living wartime prisoners of war, and those missing in action.

The image at the top of this post is of three members of the Alaska Viet Nam Vets Motorcycle Club, with Rachel Block, honoring fallen warriors, in a ceremony created by this motorcycling Veterans' group. Above them is Pipe Major Dan Henderson, performing a stark Amazing Grace.

In 1942, when she was 14, she was captured by Japanese forces in the Philippines. Her father, a Spanish-American War veteran, was in hiding. The soldiers tortured Ms Block and her siblings for days, trying to get them to give up their father's whereabouts.

They pulled out her fingernails and toenails. They tied her and her siblings to stakes on ant hills. They left the kids in the sun there, with no water.

Rachel Block described how, from the beginning to end of her ordeal, she cried out or prayed to God for strength. Her description of her faith and its power was such stark contrast to the awful pain and humiliation her family endured. I saw kids, teachers and veterans openly weeping as she calmly recounted her sacrifice.

Ms Block had recently returned to Alaska from a visit to Luzon. She brought back recently discovered dog tags from a fallen American soldier. She presented them to Judy Thompson from the Department of Veterans Affairs. They will be brought back to the town where the fallen soldier once resided. 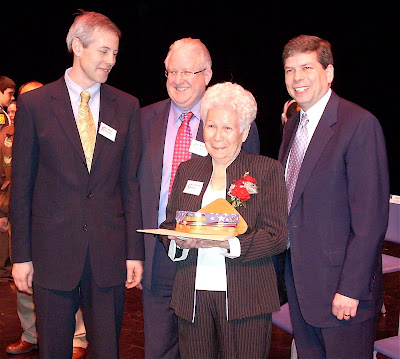 I had the honor of once again participating in this ceremony. Three buglers finished the proceedings with a simple rendition of Silver Taps. One bugler begins Taps from the north. Another echoes from the west, another from the south. There is no echo from the east, signifying that those honored will never face another sunrise.

Matt Claman began Taps; Gene Horner was the first echo; I was the last. It was the first time I had played this version along with Mayor Claman. All three of us thought we gave Silver Taps and our fallen our best efforts.

Phil, I was nearly in tears myself, hearing Silver Taps in my mind. My husband is a Vietnam veteran; he was 18 when he did his first tour of duty there. He didn't suffer the slings and arrows upon returning home, but I always feel bad thinking about those who did. I'm not old enough to know anything first-hand about the Vietnam war, but I thank my lucky stars that my husband returned in one piece and without any psychological trauma.

My father had me and my brother taught Taps on the bugle as grade-schoolers and we we played it at many, many funerals of veterans back in my town. I remember trying to keep a "stiff upper lip" while family and other folks wept during the service.

Bless those who keep our Democratic way free. It is because of them that I am a proud progressive today.

I have a question if someone can answer it. I was an Honor Guard in a Sheriff's department for years and I have always heard the original taps.

I listened to the clip of Silver Taps and tried to find how this version started. All I could find that it was for Texas A & M for deaths during a school term.

Is this the rendition you normally play or did ya'll switch. If anybody can answer it would be greatly appreciated.

Thanks for sharing this, Phil.

Phil,
Thank you for this great piece. I was not aware that this event was happening or we would have definitely been there. I am sure that Diane and I will be there from now on.
Tony

Normally, Taps is played quite simply at individual memorial services. By a single bugler.

During the course of a year in SC AK, Silver Taps (with a double echo) is played at this particular POW-MIA remembrance. On Memorial Day, they have had a version of echo Taps that is played as a relay - from the National Guard Armory, over to the main flagpole at the National Cemetery at Ft. Richardson.