Former Alaska Attorney General, friend, and former colleague at Mat-Su College, Talis Colberg, is running for Mayor of the Matanuska-Susitna Borough. The special election - to fill the vacancy left by the death of Mayor Curt Menard - will be in early June.

Colberg is a likely winner in a field crowded with less qualified candidates. Colberg was on the Borough Assembly before being appointed as Governor Palin's first Attorney General.

I saw my first Talis sign this evening, on the tail of a friend's car. 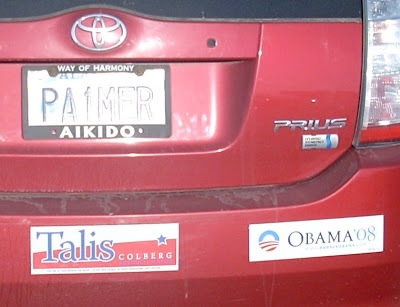 Posted by Philip Munger at 8:29 PM

Why would anyone want to vote for Talis Colberg, is he not a palinbot? I don't want anyone in power that can't tell her no or be honest about her.

He is not a PalinBot.

Many good people were taken in by Palin over the years. Talis was one of them. I was not. Many of my friends are still Palin supporters. Talis is not one who still supports Gov. Palin.

I'm not endorsing him for Mat-Su Borough mayor. Yet.

Talis Colberg was one of the first fairly conservative people to openly support me five years ago, when I was criticized for an artistic work supporting Palestinian rights. I was one of the first people calling for his resignation when he advised state employees not to honor the Legislative Council subpoenas.

I've written here since he backed the Palin administration against UAA Prof. Steiner's access to state correspondence on Polar bear status, that I sensed growing discomfort on his part toward what his job entailed under an anti-science, increasingly secretive chief executive.

I hope to cover the MSB special election in detail.

Thank you, that's why I asked the question. I did not start getting involved with the politics in Alaska until SP ran for Governor and I voted for her. I felt my mistake immediately and now I'm "anybody affiliated with her paranoid", if that makes sense. The drama with her goes on and on. So I've learned to check things out. Once again, thanks for the answer.

Is that Mike Chmielewski's Prius?

Talis showed us his true lack of character when he did what he knew was wrong.

It is not a matter of his "being taken in my Palin." Taken in or not, right is right and wrong is wrong and his actions were wrong.

Sorry, he failed the character test. It is easy to "have character" when it is not being tested. When it is tested, and you act in a dishonest manner, NO MATTER HOW "TAKEN" YOU ARE WITH SOMEONE, you are still acting dishonestly and unethically.

This is the same kind of c.r.a.p. when some woman who accompanies a serial killer on his rape and torture spree and then gets off because, she was "abused" , was "afraid" or was "seduced" by the criminal.

The only excuse for Talis is stupidity and incompetence.

In real life, it is often people we like who ask us to act in an unethical way. Just like rapist don't always hide in bushes in dark alleys, we lose our character to people we are "taken" by.

Stupid and weak are his only excuses for his actions.

There is NO way he has character and he certainly is not qualified for any political position.

Christ, he is not even qualified to remain a member of the bar and if he had been prosecuted, he would not be a member now.

It is uncomfortable when people we know and like for many reason's end up not being what we thought they were, but staying in denial because someone is our "friend" is a disservice to others and to the core concepts of ethics and honesty.

It hurts to have friends disappoint us, but trying to validate their misbehavior is just denial.

Unfortunately, though, he's the best qualified candidate in the mayoral race. By some margin.

I've talked to several friends who have become just as disenchanted by Colberg since September, who say, "I'll just sit this one out." I'm hoping to get Talis to talk about what happened between Palin's VP pick and his forced resignation.

You cannot "forgive" someone for their wrongs until they apologize which to me means coming clean and fessing up to what you did.

Put your cards on the table and with true sincerity explain why, why, and how you did what you did and then offer a sincere apology.

A "sincere" apology means you have reached down into the cellar of your soul and come to terms with yourself. That takes courage and character.

It is not that a person does wrong, but that he continues to do wrong in the same manner, or worse, denies that he did wrong in the first place.

If Talis has any real character, he will do that. To me that means he comes clean about Palin, what she did, said, who she influenced and how he responded. He admits his weakness, his stupidity in not standing up to her and explains why and HOW, he failed to do so.

I am not without compassion, we have all done something at sometime that we knew was wrong, but most of us did it when a hell of a lot younger and we learned.

Talis is not kid. He is a grown middle aged man and character is like being pregnant. You cannot be just a "little" of both, or "pregnant" in some areas while not in others.

If Talis wants my approval--and I am sure he could care less-- he needs to "drop the dime" big time on Palin.

If he has any character he will.

If he doesn't then I have to assume that his conscience is not hurting him and if it isn't then he has no character, no ethics and no personal courage.

This was a big big deal. He was the attorney general of this state and many good people's lives were affected by his actions and in actions.

People's reputations are hurt, their faith in life, in humanity, in all they believed to be good and true was severly damaged by Talis's actions.

HIS WERE NOT SMALL CRIMES.

It is one thing to intellectually know that people are damaged by those who act in an unethical manner but it is another when you have personally been victimized by authority figures that society counts on to trust and to believe in.

The postion of the highest law enforcement office in this state must be above reproach and in Talis' hands it was not.

You just haven't lived until you have had someone with the this much power lie to your face, lie under oath and change the entire course of your life. Well, I have "lived" and watching Talis repeat actions that severely damaged my life for the last 30 years is just a little too much to swallow.

He either comes clean or to hell with him. And I mean that with as much vehimence (sp?) as I can muster.

It is no different than legal rape.

Thanks Phil, I will be looking forward to your coverage and insight in this election.

There are also Colberg signs popping up along the Fish hook roads.

Anyone associated with Palin and the valley's hard right republicans sure makes it hard to consider him. I would sooner vote for a grocery bagger with a D behind their name at this point.

"I'm hoping to get Talis to talk about what happened between Palin's VP pick and his forced resignation."

That is the only way I will vote for him, if he does talk about this AND assure us that he is not going to "get bendy" with the law with his own administration.

Please find out if he signed an agreement to not discuss Palin with the public.

He has explainin' to do

To so loosely use the term rape in such a flippant manner pertaining to politics is demeaning and offensive.
What Alaskans are having to go through with our political landscape is almost beyond reproach and certainly embarrassing to us as a State.
It does not however come close to say the tragedies of the rape of women and children in Darfur. Those are atrocities that should test our faith in humanity.
State of Alaska politics is a small drop in huge ocean of tears filled with political wrongs upon our planet
An egotistical governor and her posse will never test my faith in life and the good of people as a whole.

"Colberg is a likely winner in a field crowded with less qualified candidates."

good lord, how bad are the other candidates?

colberg's performance last fall should be enough to disqualify him for any elected office.

my shoe is more qualified to be mayor than colberg is.

the other candidates are not suitable, at all. Even M. Menard, who serves on the Wasilla City Council, has shown little interest in being prepared for the business of that city council, and has a fairly right-wing agenda.