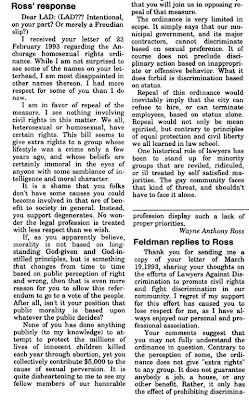 The letter, apparently written March 19, 1993, appeared on p. 7 of the May-June 1993 of the Alaska Bar Rag, a publication of the Alaska Bar Association. The acronym LAD Mr. Ross sneers at stands for "Lawyers Against Discrimination," a group which had formed to attempt to prevent the repeal of an ordinance that had recently passed in the Anchorage Assembly, which prohibited the Municipality of Anchorage and municipal contractors from employment discrimination on the basis of "sexual preference."

It was a big messy battle in Anchorage in late 1992/early 1993 in Anchorage. The ordinance was ultimately repealed. Discrimination on the basis of sexual orientation (or preference) remains legal in Anchorage, as in the rest of the state.

Thanks for that hat tip; I give a hat tip also to Steve, who passed it to me after acquiring a copy from the Alaska Bar Association.

Anyone who has not yet written to his/her Representative and Senator (unless you live in Juneau and have no Senator) to urge a "NO" vote on Mr. Ross' confirmation as Attorney General (they vote tomorrow) should suspend all other activities for a few minutes and send an email with that message -- NOW, please!

Given WAR's flash of self-awareness today, when he admits that his idiotic advice (that the law does not matter re Senate appointment/3 names submitted by Palin) may cost him the confirmation - I am wondering if he is throwing HIMSELF under the bus - as he realizes the futility of trying to cover for the inept GINO.

Could be, but that gives him a lot of credit, perhaps more than is due, for: a) self-awareness and perspicacity; and, b) intellectual integrity. None of those qualities have heretofore been in much evidence.

Somebody needs to track down WAR's ties to the freaky right-wing movement known as the Posse Comitatus, a movement with roots in central Wisconsin in the 1970's and 80's.

Can someone please post a complete PDF of this letter & Feldman's response to it?

You've got it Anon -- at Henkimaa.com -- full PDF along of all discussion including WAR's letter and Feldman's response, as well as the transcription of WAR's letter as done earlier tonight by the Bent Alaska blog).

Between this letter & the 2nd Senate Judiciary Hearing on Monday 4/13 (Go to Gavel to Gavel's Archived Audio & listen if you haven't heard that one!) It should give Rep. Ramras the answer to his "Well, if he did think this way in the past I hope he's grown since then" What B.S. Ramras made me want to blow my lunch listening to his babble & excuse making in the House Jud Hrg. He was being such a putz.

(Or at least I think it was him who made that comment, to which WAR replied: "I like you." But one must assume not in that way.)

i was a strange child. i always loved lima beans, and spinach, green beans, peas and brussel sprouts.