Sarah Palin is Burning Her Bridges - to EVERYWHERE! 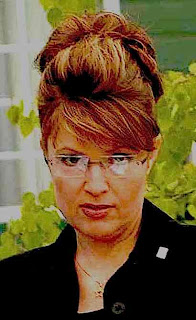 Months ago, she asked Ted Stevens “to step aside…to play a very statesmanlike role in this now.” RESIGN! This week, she asked Senator Begich to resign. Does she think if they all resign she can move to Washington? I wonder. Write your own rules, play your own game and you get a free wardrobe? Did we vote for best looking? Or best Levi’s? Or best smile? NO! Sarah Palin ousted incumbent Frank Murkowski in the primary and popular governor Tony Knowles in the general! She won because the People wanted change. The people wanted leadership. The people wanted Ethical Honest Government. The people did not want Mean Girl Snark!

Tonight she released a letter to Senate President Gary Stevens. Background: I’ll be brief. Juneau Senator Kim Elton-D received an appointment from President Obama to work in the Department of Interior on March 6, 2009. Alaska rules state that the district party submit preferred candidates to the Governor for an appointment. The Juneau Democrats gave Sarah Palin one name: Beth Kerrtula. Beth is currently a House Representative. She has been a member of the House since 1999. She has been the House leader since 2006. Kerrtula is clearly the most qualified candidate in Juneau.

During the campaign, Beth said that Sarah Palin was not qualified to be VICE-President…I know, shocking assessment. Sarah had a cow and named local Republican turned Democrat Tim Grussendorf to the seat.

Tim was a Republican 3 weeks ago…tadah! Now he’s a Dem. The rules state the Senate Democrats have to approve the appointment. They said, “Thanks but no thanks.”

My gosh, you’re all caught up! OH, Wait! The process is now UNCONSTITUTIONAL to Madam Palin. She has just released a letter saying she wants her pick; Republican Tim Grussendorf (sounds like a wizard from Harry Potter) to go before the full house for approval! And, Palin believes the historical process is wrong.

I only hope she has medicine for the drama she brings to the state of Alaska. Here is her letter:

On March 31, I nominated, under AS 15.40.320, Mr. Tim Grussendorf to fill the vacant senate seat for senate district B. On the following day, April 1, I received an unsigned memo from “Alaska Senate Democrats” to Senator Gary Stevens that the nomination of Tim Grussendorf, “did not achieve the needed support to be seated.” The memo also stated that “Today the nine Senate Democrats met to discuss Governor Palin’s nomination.” Based on various news reports, it is our understanding that the meeting of Senate Democrats took place behind closed doors.

The Alaska Constitution provides that “Each [house of the legislature] is the judge of the . . . qualifications of its members. . . .” Alaska Const. art. II, sec. 12. The Department of Law has opined that “confirmation by a political caucus is probably a legally deficient procedure. The confirmation procedure set out in existing law appears to conflict with the Alaska Constitution.” 1987 Inf. Op. Att’y Gen. 2 (Sept. 21; 663-88-0107).

I respectfully request that the entire Alaska Senate consider my nomination of Mr. Grussendorf in open session, in the same fashion as the legislature would consider any other appointment subject to confirmation. The people of Alaska and Juneau are entitled to a public confirmation process that is consistent with the Alaska Constitution.

File No. 663-88-0107, Subject: Procedure for appointment to fill legislative vacancy.

FOR THE LOVE OF GOD AND ALL THAT IS HOLY….ISN’T “BEHIND CLOSED DOORS” where you discuss such matters? It’s Alaska…all the doors are closed right now! It’s called heat retention. The political posturing is pathetic. Has anyone reminded the governor that her only friends for the last 2 years have been the Democrats? That is how she passed ACES and AGIA, the two sparkliest jewels in her “Miss Governor” tiara. Too bad those Dems are under the bus now.

With the GOP dumping Sarah Palin for Newt Gingrich, Wayne Anthony Ross a less than savory Attorney General candidate and Senator Begich NOT resigning, we may be witnessing the desperate gasps, rattling coughs, and grasping at ghosts of a lost political career.

Was WAR Ross behind this? Do the republicans in the legislature really want to confirm this guy? He's not even been confirmed yet and he's already challenging the legislative branch. They should ask him some questions during his confirmation. If this guy will be poisonous they should get rid of him now while they still can. Otherwise the legislature will be voting for WAR.

Only submit one candidate, Kerttula, over and over.

It's basic discipline. It's parenting. (Which is why Sarah will never know what hit her.) Even dog trainers do this. It's the "nevertheless".

Nevertheless, WAR is not confirmed.

Nevertheless, Grussendorf is not confirmed.

You don't "explain". You don't "attack". You don't do anything but keep repeating the mantra. Eventually the juvenile (or Governor as the case may be) will figure out that you're not going to change your mind and they are wasting their time.

This works with dogs, children and even....Governors.

Who you elect for office really matters ?

Wow religion and Incompetnence is not enough to Govern ?

There is NO WAY IN HELL that she will get 11 votes from the current Senate to confirm Grussendorf. She has pissed off too many Repugnicans by refusing to meet with them over anything, including stimulus funding.

Many legislators are losing patience with her attempts to be Queen. Members of the Finance committees in both parties are royally torqued about her refusing to spend appropriated funds, contending that if she doesn't want to spend them, she should have line item vetoed them so that the Lege would have the opportunity to override her vetoes.

This is another attempt by the Governess to exercise powers that rightly belong to the Legislature, and tempers are running high. I don't have any inside dope on this, I just watch Gavel-To-Gavel from time to time, and it's pretty obvious.

Palin has concluded that, because his conviction was overturned due to prosecutorial misconduct, Ted Stevens is innocent and should be allowed to reclaim his Senate seat.

During the 2008 Presidential campaign, Palin's favorite stump speech referred to Obama "palling around with terrorists", of course referring to Bill Ayers. Yet Ayers was never convicted due to......prosecutorial misconduct. So using her logic, Ayers was innocent and therefore she was unfairly calling him a terrorist.