A Compelling Letter to Alaska Legislators About Wayne Anthony Ross 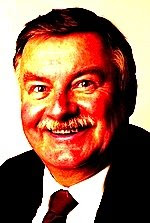 I'm a writer-blogger, not a political blogger — though I did try it out a little last fall after Palin became a vice-presidential candidate. But it proved too emotionally exhausting for me, & other Alaska progressive bloggers were doing it better. Sometimes, though, you gotta take a stand on something. So here's the letter that I just finished sending out to Alaska legislators. Every. Single. One. Of. Them. It's about my opposition to confirming Wayne Anthony Ross as Alaska Attorney General.
Dear Senator/Representative:
I am writing on my own behalf to express my opposition to Wayne Anthony Ross as Alaska Attorney General. Amongst other things, this letter provides substantiation for one of the claims made in public testimony by Paige Hodgson during the Senate Judiciary Committee hearing on April 8 about Mr. Ross' opinions about domestic violence.
I oppose Mr. Ross' confirmation on several grounds:
I want now to go into further discussion of his views about violence against women and children.
By way of background, I am an 18-year staff member of the Justice Center at University of Alaska Anchorage, where I am responsible for the preparation and layout of research documents, including our quarterly, the Alaska Justice Forum. I'm also responsible for the design and maintenance of the by-now extensive Justice Center website. As such, I am very familiar with the groundbreaking research conducted in recent years by the Justice Center's Dr. André Rosay and his research partners on sexual violence and violence against women in Alaska, and in fact helped to prepare most of the materials which Dr. Rosay presented to the Senate Judiciary Committee when he testified there on March 25.
My familiarity with Dr. Rosay's research findings made me all the more alarmed when I heard the testimony at last week's Senate and House Judiciary Committee hearings on Mr. Ross' appointment. I mean not only the public testimony of Leah Burton to the House Judiciary Committee on the statements about spousal rape and domestic violence which Mr. Ross is alleged to have made at a DADS group meeting in the early 1990s — testimony I personally find credible — but also the public testimony last week to the Senate Judiciary Committee of Paige Hodgson, who discussed comments made by Mr. Ross at a panel discussion a few years ago at University of Alaska Anchorage. According to Ms. Hodgson, Mr. Ross, who was one of the panel presenters, remarked that domestic abuse was on the rise because the equal rights movement "emasculated men" and caused them in turn to beat their wives. He further insinuated that women lied about domestic violence in order to gain advantage in child custody cases.
On questioning by the committee, Ms. Hodgson stated that she had asked the university to set up the panel discussion, and that it was organized by Dr. Sharon Araji. Dr. Araji was at that time a sociology professor at UAA but has since joined the faculty of University of Colorado in Denver. In an attempt to verify the testimony, I wrote to Dr. Araji last week, and today received an email in reply, in which Dr. Araji wrote:

Yes, he was on the panel that was a community workshop. Andre [Rosay] and Pam [Kelley] are well aware of this workshop as [the] Justice [Center] also participated in it. I think it was Fall of 2005 — it was in conjunction with the PBS documentary "Breaking the Silence". This was about children's experiences when they were given to abusive parents in contested custody battles. I don't remember what Wayne's words were exactly, but his attitude was quite cavalier and placed the blame anywhere but on the abusive husbands/partners.

Research on the UAA website confirms that the event, cosponsored by the UAA Sociology Department and the Justice Center, was held on the UAA campus on October 14, 2005 in advance of KAKM's broadcast of "Breaking the Silence: Children's Stories" the following week. The event included a showing of the documentary, followed by a panel discussion and discussion with the audience. Justice Center faculty member Pamela Kelley, J.D. was among the panelists, along with Dr. Araji and Mr. Ross.
I spoke with Professor Kelley this afternoon about the panel. Like Dr. Araji, she has no recollection of a specific remark by Mr. Ross about the equal rights movement "emasculating men," but she indicated that Mr. Ross' comments on the panel were much as both Paige Hodgson and Dr. Araji characterized them, "hook line and sinker" taking an extremist "dads' rights" position that excused abusive men from any responsibility for domestic violence and abuse, and alleging that accusations of such crimes were generally fabricated in order to gain advantage in divorce or child custody battles — regardless of evidence to the contrary.
This should come as no surprise to members of the Senate Judiciary Committee and others who heard Mr. Ross' testimony last Wednesday, April 8, because many of his statements there echoed such opinions — for example, Mr. Ross contended that Office of Children's Services workers, who are tasked with protecting children from abuse, are actually trying to remove children from families in order to "get money from the legislature" or that at least some people are accused of child abuse "just because they offended an OCS worker." Of course there are men who prove to be innocent of charges of abuse and domestic and sexual violence brought against them. But Mr. Ross, who claimed in his testimony that "all my clients are innocent" (by implication, even those who were found guilty in court), appears to have a strong bias against even entertaining the possibility of guilt on the part of a husband, boyfriend, or father accused of these serious crimes, regardless of the evidence.
Mr. Ross also showed considerable ignorance of the facts regarding sexual violence in the state — for example, that Alaska has the dubious distinction of having the highest rates of sexual assault in the nation. "I've heard that," he told the committee, "and I have no way to verify if that's correct." (Committee members, of course, had received ample proof just two weeks before when Dr. Rosay presented UAA research to them.) Asked by Sen. Lesil McGuire "how you intend to tackle and educate yourself" about these issues, Mr. Ross evaded the question, telling the committee how after his few days on the job so far, he now knew "where the men's room was" and was learning how to use the state email system, commenting that "learning new things" was part of the fun of the job. Once again the word "cavalier" comes to mind.
Is someone with such a proven bias qualified to take on the role of Alaska's chief law enforcement officer, and head of the department charged with prosecuting these crimes? Research shows that less than 30 percent of founded cases of sexual violence reported to the Alaska State Troopers actually result in a conviction. Might we not expect conviction rates for founded cases to go down even further under an Attorney General who, biased to believe all the accused to be innocent regardless of evidence, might well pressure the district attorneys under his supervision to pull their punches?
Mr. Ross claims that he can fairly represent and protect the rights of all Alaskans, including all of those he has shown enmity, disregard, and contempt toward throughout his long career. I am not so confident.
I urge you to vote against Mr. Ross' confirmation as Attorney General.
Posted by Philip Munger at 9:37 PM

I wish some of the women and children who were in costody cases with Ross as the attorney for their ex's would step forward. I am sure they have a lot to say about how he handled his cases, and most importantly how he collected or created evidance for his clients.

Wow. That is pretty damning.

I wonder if any of them will act on it.

A note: tonight I discovered that I had misspelled Paige's surname as Hodgson than one it really is -- Hodson. Paige Hodson was a founder of Alaska Moms for Custodial Justice and helped to gain passage in 2004, I believe, of a law which protects abused children from being placed in the custody of the abusive parent -- which reportedly won unanimous passage in both houses of the Alaska Legislature.

Excellent! Saw this from Shannyn. Glad you posted it-I will,too. And hope it helps in this late hour.
My stomach is in a knot. Waiting.....

I hope this gets read by those on the fence and those who are hiding behind the fact that his anti-women comments have not been "substantiated".