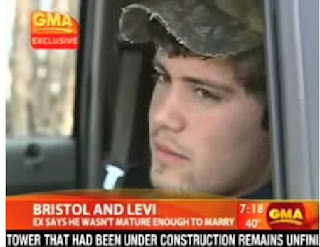 For those of us who have been writing on the web about Alaska politics for years, the choice by Presidential candidate John McCain of Alaska Gov. Sarah Palin, to be his running mate, changed everything. In terms of number of readers; in terms of requests for articles on nationwide or foreign web journals; in terms of demand for our work to be consistent; and in terms of the impact our writing had on Alaska issues beside Palin herself.

As Shannyn Moore, Celtic Diva and AK Muckraker wrote yesterday, Gov. Palin seems to be giving us more credit for impact on state affairs than we have given ourselves. Or, maybe it is blame that Palin is awarding us. As Moore wrote so effectively at Huffington Post Tuesday:

I was waiting to hear who would be faulted for the largest political defeat in Alaska history, short of an election. Who would Sarah blame? Mudflats, Diva and I speculated last Thursday at a “victory dinner.” We knew it wouldn’t be W.A.R. or herself.

When it comes to taking responsibility for her failures, Sarah Palin is George W. Bush with lipstick; nothing is ever her fault.

Troopergate was her brother-in-law’s fault. Walt Monegan was a rogue commissioner. Her pro-Pebble Mine stance during a contentious election was the fault of a “Governor’s hat” wardrobe malfunction. Her criticisms when her witch hunting, governor-anointing pastor, Pastor Muthee, was exposed, were the fault of people who hate Jesus. Her failed interviews were Katie Couric’s and Charlie Gibson’s fault. Her exorbitant wardrobe was the RNC’s fault. Her charging the state per diem to sleep in her own bed and flying her family around the country at state expense weren’t her fault. Her daughter’s problems are Levi’s fault. Her VP political loss was John McCain’s fault. Her image problems are Tina Fey’s fault. Turkeygate was the cameraman’s fault. Her policy on aerial wolf hunting was Ashley Judd’s and Outsiders’ fault. The empty Juneau Senate seat wasn’t on her, it was the Senate Democrats’ fault.

Whose fault was it that W.A.R. was rejected?

Whose fault was it that your bills failed in Juneau?

Whose fault was it that you didn’t sign SB89 supporting WWII troops?

Whose fault was it rural Alaska was damn near starving this winter?

No, Governor Palin, your losses are your fault.

No, the person who is going to sink Palin's chances of once again making it onto the national stage is a 19-year-old kid who lives a few miles from me.

It might be tonight, when he and some family members are on Larry King's CNN program. Or it might be when his new "tell-all" book comes out:

The war between Bristol Palin and Levi Johnston keeps getting worse. Now a new report by National Enquirer says that Johnston is penning a tell-all book that threatens to expose the secrets of Sarah Palin and her family to the world.

Levi Johnston, 19, needs the money because he sees a lengthy and expensive custody battle coming over baby Tripp.

Johnston is said to be in a position to hurt the Alaska governor, due to his formerly close relationship with the family.

"Levi was right there in the middle," a source said. "He knows what really happened inside the Palin family."

A family friend said that Johnston is eager to write the book because it serves two purposes. First, he can get money for his custody battle, and secondly he would get to tell his side of the story.

"If Levi could get a million bucks, it would be worth telling all he really knows." the source said.

This tells us all what we know has been true all along...there are alot more skeletons in the Palin closet...

I have never bought a trashing book of this sort, but for Levi, I will.

I suppose I will have to also buy the Sarah story written in stilted English so I can compare the two, but that one I can buy used from Amazon for $.01.

Can't wait to read it, Levi! Best of luck to you!

Wish I had the job of ghost writer. A sure best seller, only modest talent required.

It will be interesting to see whether Sarah (or Bristol acting for her) sues for libel. She will probably feel she has to sue to satisfy her supporters, but it would be very expensive, she would be unlikely to win, and the Palin family under cross-examination would be a lawyer's dream.

Maybe Levi will make his million by not writing the book. We'll see.

Phil, I agree...while Sarah's base doesn't necessarily read blogs, they shore do watch them some Tyra and that Larry King fella!

I'm sure THAT interview has her WAYYYY more concerned than any ethics complaint...especially now that sharp legal shark Rex Butler is representing Levi!!!

Levi, I will buy your book. In fact, I will buy several copies of your book and give it to friends. Hey, more than that: I'll encourage Progressive Book Clubs to buy it and discuss it.

WRITE ON, LEVI. Write on!

All of us progressive types know in our hearts that we don't really have that much in common with Levi and family, right?

I too live a few miles from them and I only wish them the best in their attempt to get custody of Levi's child or children.

I feel that the Johnston family has been very "discreet" in their public appearances on various talk shows, and I applaud their demeanor.
What I hope is that Levi does have someone pen a book for him and that he receives a hefty sum for it.

I also hope that he takes some of that money and completes High School and perhaps even puts some money aside for him and his sister to attend college, as I feel that they have unrealized potential that can be recognized if they just have the means to further themselves.

Levi deserves to make as much money as he can off of Palin. Certainly Palin has used and abused this kid along with her entire family as well as the rest of us in Alaska.

I am sure many will try to shame him for "washing dirty laundry in public" BUT HE NEVER ASKED TO MEET THE NATIONAL SPOTLIGHT AT THE REPUBLICAN NATIONAL CONVENTION.

HE NEVER ASKED TO HAVE TO FIGHT TO SEE HIS SON.

We all know that Palin did to Wooten ( and Monegan ) and everyone else who opposes her in even the slightest way.

Levi has a DUTY to tell his side of the story ( Trip deserves as much as well) and a DUTY to get money to support his child in any legal way possible.

Anyone who tries to chastize this kid for writing a "tell all" will not be using commons sense.

You may be very young, but I think the love you have for your child is sincere and deep. Good on you.

It makes me glad to read that Levi has security. I don't trust Sarah Palin or the people who support her. I'll look forward to reading Levi's book- but I bet Sarah's gonna crash and burn before it reaches that point. The more the Johnston family talk, the more stressed-out Sarah has to be. It's so gratifying!

I really hope folks are not advocating a custody fight for the purpose of Levi taking full custody away from Bristol. We are taking about a baby, not a political pawn. Let us not stoop Sarah Palin's level of using children as ping-pong balls. Obviously, Levi should have reasonable visitation rights, but do you really want to punish Bristol & the baby to hurt SP? Infants need their mothers. Remember the Rhesus Monkey experiments and read up on Reactive Attachment Disorder if you want to know the risks of separating infants from moms. Let us hope if this gets to a court that a sensible judge looks to the babies needs and can structure visitation so Levi can be an active father, but the child can also have healthy physical, mental and emotional development without being ripped away from his mom as punishment for taking the vindictive advise of her train-wreck parents.

I agree with Renee. Both those kids - Bristol and Levi - will be better off when they get away from their respective families, IMHO.

Sarah Palin hasn't given you guys nearly as much credit as you've given yourselves.

I don't think that anyone is advocating that at all. Levi certainly deserves to see his child and it is a disgusting attempt by both Bristol and her family to refuse to allow Levi to take that child from their home at all. It seems to be all about control for them. I do have to wonder what motivates them in this behavior as it certainly can't be what is in the best interest of the baby to refuse to allow the father, who by all accounts WANTS to be a large part of his childs life, access to that child unless it is under their terms and conditions.

You know, I have never heard Levi say anything personally negative about any of the Palin's. He may be directionally lost, but doesn't seem to be a bad kid. He appears to want to patch things up with Bristol and be a part of the baby's life. I hope he and Bristol can work things out. Sarah and her pops need to stay out of it.

I'll never know how good a dad I would have been had my first child been born when I was Levi Johnston's age. I was more than twice as old as he now is. And it still scared the hell out of me - the responsibility, the unknown.

i'd tend to give both levi and bristol the benefit of the doubt due to youth and inexperience. hopefully there's nothing much going on here except a fresh breakup. my ex didn't want me to see the kids at first either. but she soon realized i would be a hell of a lot better advocate for them than most of the guys she shacked up with after me. bristol will likely have a similar epiphany someday.

Okay... I just watched the Larry King interview. In my opinion, Levi and his mother need to be quiet and let Mercede (Sadie) do all the talking. She knows what she thinks and ain't afraid to say it.

Does one have to be angry all of the time in order to be considered a "progressive" ?

I'm so angry, I'm gonna go out a pick up trash on the side of the road!

I'm so angry, I'm gonna distrust anything I hear in the Corporate Media and the reporting Villagers who live just down the freshly paved streets from them!

I'm so angry, I'm gonna speak out
for equal rights for my gay/lesbian friends and family!

I'm so angry, I gonna shine a light on your pithy accusation.