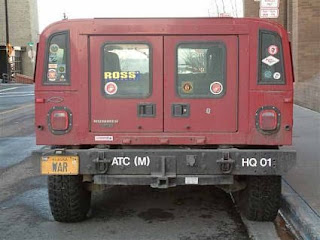 This was big week for Alaska progressive bloggers, especially those of us who had helped raise awareness of details of Alaska Attorney General nominee Wayne Anthony Ross' past divisive acts. Ross can now return to private practice. The legislature can concentrate over the 2009 session's final weekend, on pressing needs that could have been addressed during the time wasted on dealing with Ross.

So many progressive blogs in Alaska helped get the message out on Ross. The list is long.

This weekend, though, PA will review a few outstanding articles or sets of articles written from within our community.

Bretwood Higman, PhD, along with his wife, Erin McKittrick, run the blog Journey on the Wild Coast. Since finishing their muscle-powered trek from Seattle to Unalaska Island, they have settled down in Seldovia, built a house, and had a child. Since the start of the ongoing Mt. Redoubt eruptions, Hig has been writing about aspects of the mountain's impact on Cook Inlet. He's also taken some of the most amazing photographs and videos of the mountain, including time lapses and composites.

Here's his composite of a set of eruptive lightning pictures: 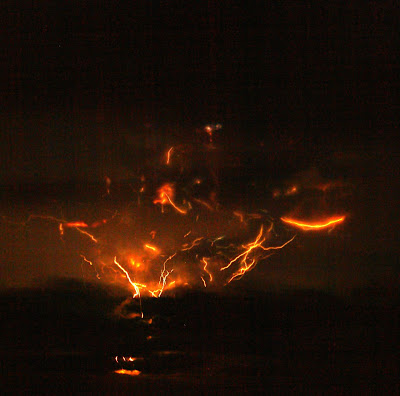 On April 15, Hig published one of the most brilliant essays I've read at any Alaska blog. It is called Oil Under Fire. It is a thorough article on the history, function and vulnerability of Chevron's Drift River oil terminal and storage facility.

Hig has a PhD in geology from the University of Washington, studying tsunamis and the geologic records they leave behind. He puts that knowledge to excellent use in the essay. Here are some excerpts:

During the winters between eruptions, snow accumulates on the north slope of Redoubt, forming a glacier that flows five miles down into the Drift River valley. During eruptions, hot ash dumps onto this glacier. The glacier melts and mixes with the ash to form a great flood of mud that carries boulders and anything else in its path. Even as the Drift River facility was being built, the volcano erupted, leaving workers stranded by volcanic mud. In addition to worker safety, lahars could unleash a large oil spill, if any of the tanks were ruptured or torn from their foundations.

The first eruption at Redoubt happened on March 22, sending a lahar down the Drift River and around the terminal. Several eruptions followed including a violent explosion on April 4 that sent another large lahar down the Drift River. Mudflows have overtopped the dikes and surrounded the tank farm, swamped the airport, and caused damage to some equipment. But so far, major flows have not breached the dikes, and no oil tanks have been damaged.

Volcanoes don’t follow any rule that says every eruption must be the same. Stratovolcanoes like Redoubt build massive mountains over thousands of years, and can destroy the whole edifice in an eruption thousands of times larger than we have seen in Redoubt’s current episode of unrest. These giant eruptions can leave a hole where before there was a mountain. During such a caldera forming eruption, it is possible that an avalanche of hot ash, pumice, and rock (called a pyroclastic flow) would reach all the way to Cook Inlet, and in the process overrun and destroy the Drift River Terminal.

For an example of an eruption of this sort, we can look southwest of Mt. Redoubt to Aniakchak Caldera on the Alaska Peninsula. This volcano exploded catastrophically 3500 years ago, sending a pyroclastic flow 20 miles to the Bering Sea, where it then continued into the water, generating a tsunami that was likely over 30 feet high even after crossing over 75 miles of the shallow Bristol Bay. Along the Bering Sea coast the deposits of the pyroclastic flow are tens of feet thick.

The natural resource extraction industry often finds itself in a conflict of interest with the public. The Drift River terminal faces what is for Chevron likely a financially acceptable risk of destruction by volcanic catastrophe. In cases like this, the industrial operator of a facility need only multiply the probability of destruction by the cost of the facility and cleanup. If that is less than the profits from having the facility, then the risk is financially acceptable.

From a public perspective the calculation is very different. The potential costs are many and difficult to quantify: destruction of subsistence, recreational, and commercial fisheries; damage to a regional reputation for pristine wilderness that draws visitors; and moral concerns over destruction of ecosystems. And the benefits are smaller and less direct. Some stakeholders receive almost no benefit from Chevron’s success, and many only gain tertiary benefits through increased economic activity.

If everything goes well, Chevron profits. If things go badly, everyone loses.

A POEM FOR JIM NAGATAAK'W (JAKWTEEN)
MY GRANDFATHER, BLIND AND NEARLY DEAF
by Nora Marks Dauenhauer
I was telling my grandfather
about what was happening
on the boat. My father
and his brothers were trying to anchor against the wind
and tide.
I could smell him, especially
his hair. It was a warm smell.
I yelled as loud as I could,
telling him what I saw.
My face was wet from driving
rain.
I could see his long eyebrows,
I could look at him and get
really close. We both liked this.
Getting close was his way
of seeing.

The earlier poetry installments are here and here.

Fascinating developments in defending anonymous bloggers and discussing aspects of internet anonymity continue. Back in late March, Alaska Rep. Mike Doogan (D - Spenard) used his government-paid newsletter communications channel to reveal the name of Alaska's most prestigious anonymous blogger, AK Muckraker. Recently, the blog Conservatives4Palin.com has come under fire from Alaska Rep. (R. - Fairbanks) in a somewhat similar manner. Ramras said of his critics at C4P, "I would encourage whoever is behind Conservatives for Palin to step out of the shadows."

Now The Mudflats and Conservatives4Palin have strangely complementary essays up on this issue, both called Should Anonymous Free Speech Apply to .... THEM??

I reprinted the essay from C4P, by Videmus Omnia. VO has commented occasionally at PA.

Steve at whatdoIknow? writes of his continuing quest to understand aspects of anonymity, as he deals further with an anoymous commenter at his blog.

One last thing: A google search of the Alaska Dispatch - Wayne Anthony Ross only yields one article - from 24 days ago.
Posted by Philip Munger at 9:48 AM

Hi. I tried to comment this morn on your post on the five things you learned from the W.A.R. battle, signed up and posted a longish comment and then poof it disappeared into the intertubes. A friend had sent me the link to that earlier today, thought I'd be interested.

Anyway, the link to the Dispatch article on Ross you mentioned came up no good. I wrote an op-ed on Ross that was published in the Dispatch, not sure if that is the one you are referring to. I'm new at this whole blogging scene and I gather you were intimating the Dispatch didn't do enough to cover Ross (?).

A day and a half prior to Ross' confirmation hearing, word I got out of Juneau was that he would narrowly be confirmed. It wasn't until he made those comments to a couple of reporters, and the subsequent (untrue) letter of denial that he had never intimated the legislature shouldn't concern it self with legal or illegal...that the tide really shifted. The point is that no one I know really believed Ross would not be confirmed, no one could have reliably predicted that.

Before I offer more comments I want to see if this gets posted. Certainly appreciate your reasoned writing here, first I've seen it.
Allbest,
Mark Richards

I have no idea what happened to your previous comment at the earlier post. I didn't remove it.

Regarding your estimates, my information seems to have been at least as good as yours. And so was Dennis Zaki's and Shannyn Moore's. We certainly were told that nothing was settled, but from late Saturday, the message was quite clear from about four or more sources - W.A.R. did not have 31.Just google Alaska Dispatch Wayne Anthony Ross. The op-ed you wrote did not appear when I googled that set of words.

I'm a little sad because of the WAR defeat.

The liberals are learning to play rough and a bit unfair.

Liberals be careful - Payback can be a bitch.

some (not all) of the opposition went outside the lines of fair play.

Conservatives usually have higher standards of ethical opposition, but they will remember.

@2:01 wrote: "Conservatives usually have higher standards of ethical opposition, but they will remember."

LOL, you have got to be kidding, conservatives are the masters of DIRTY politics.

What happened to Ross was because he was not the right choice, period. All we did was brought to light all the reasons (of his own making I might add) he was unsuitable. We vetted him and he failed the process. The vetting thing, it's for a purpose.

The pure magic of it all was that he proved us right. And, I for one am grateful.

"Payback can be a bitch."

Payback is why we have a Democratic majority in the U.S. House and Senate.

Payback is why we have a Democratic President.

Wayne Ross was the wrong man to be AK A.G.


"some (not all) of the opposition went outside the lines of fair play."

Would you care to elaborate?

I only saw people expressing their dismay that a man with Ross's negative character was even being considered.

Perhaps you see nothing wrong with having a narrow-minded bigot as Attorney General. Surprisingly, many people had an issue with that.