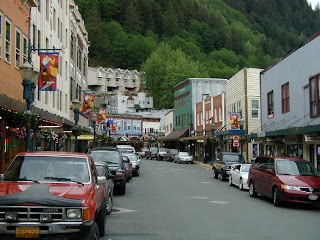 Dear friends and allies of Progressive Alaska,
It is an honor to introduce myself and KXLJ Radio 1330AM, Juneau's new progressive talk station. At last, the capital city now has a voice that stands up for human rights, the environment, access to education, affordable health care, and all of the other issues that we care so deeply about and are fighting for.
We currently broadcast Air America Radio five days a week, and are beginning to produce local content on issues within the state. Last week I broadcasted a series of interviews on HB 9, the death penalty bill that was defeated last week.
Next week I will be airing a series of interviews on military sonar testing and its dangerous effects on marine wildlife in Southeast Alaska. I am interviewing a marine biologist from Sitka who is following the issue over there, where the Navy has blockaded an island to themselves and dead marine mammals have been washing ashore.
I'm also producing video content from time to time, check out this YouTube video of a protest that took place after governor Palin announced her refusal to accept federal money to support arts and education in Alaska.
http://www.youtube.com/watch?v=sr4wcSSyKVU
There is a lot of exciting programming and movement building coming down the pike, and I'd love to be in touch with all of you about my ideas, and I especially want to hear some of YOUR ideas.
You can call our listener line at 796-1330 anytime and leave a message for me and I will return your call (or put it on the air if you'd like!), or you can always send an e-mail to info [[at]] kxljradio [[dot]] com.
You can also visit our website and listen to our stream anytime at:

http://kxljradio.com
We've invested serious money into getting this radio station off the ground, it's taken two long years to finally get a clean signal, and in this intense economic climate we need all the listeners and support possible. Right now we're hiring a sales manager in Juneau to reach out to businesses across the state who want to advertise with us. Any advice or referrals you can give would be especially helpful.
Please be in touch and join us on Facebook!

image - downtown Juneau, from alaskafishingcharteronline.com
Posted by Philip Munger at 11:19 AM

YES! One piece at a time. Slowly we will overcome conservative domination of the airwaves. Congratuations Juneau!