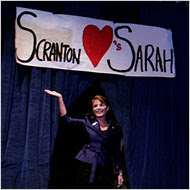 [Videmus Omnia comments at Alaska's progressive blogs, including PA, and writes at Conservatives4Palin.com. This essay is the result of AK Muckraker's defense today of anonymity across the wide American political spectrum.]

This is the first, and possibly the only, time that I will agree with a post at the anti-Palin blog "The Mudflats", and ask our readers to visit there.

Most of you have probably figured this out, but I'm not a talented writer or philosopher like RAM, or an overall visionary like JR. I don't have the technical skills of Mel, Hal, or Sinistar or the political street cred of Adam or Josh.

I'm pretty much just a working stiff. My main gig here at C4P is mostly to be the "media bias guy." So I do my best to watch what's happening in the media, both nationally and in Alaska. I also have the job of watching the anti-Palin blogs so I can see what rumors are percolating and need to be addressed or debunked. I try to keep an eye on all the Palin blogs I can find, from the scummiest Trig Truther site to the Huffington Post.

The blogs I regularly watch include the main left-wing Alaskan bloggers, like The Mudflats, Celtic Diva's Blue Oasis, Progressive Alaska, and Shannyn Moore's personal site. I'm registered on most of them and occasionally comment there. I even correspond with them, and with Alaskan reporters, on a civil and respectful basis when there is a factual inaccuracy or some other issue that needs to be addressed.

If you don't follow those sites, you may have missed a controversy. The anonymous proprietor of Mudflats was involuntarily outed by Democratic state Representative Mike Doogan.

You may have noticed that I blog anonymously. So do others here at C4P, while some like RAM and Joey proudly write under their real names. There are many reasons to write anonymously, going back to the earliest days of the Republic. I think the main reason nowadays, in this age of Google, is that expressing political opinions can harm your employment prospects if your prospective employer happens to be of a different political persuasion than you.

AKMuckraker, the proprietor of Mudflats, noticed our recent dust-up with Jay Ramras over his hypocrisy on absences from Juneau, and Ramras' call for us to "step out of the shadows." And I even got an e-mail myself from Mike Doogan, in response to my criticism of Ramras, which said "If you want to have any impact at all on me, you have to use your real name." This was echoed by Democratic Rep. Berta Gardner, who told me "Anonymous correspondence, regardless of the topic, is junk email."

Anyway, AKM has written an entry supporting the right of bloggers at C4P to speak freely. And I salute her for that. We're all believers in the Constitution here at C4P, and we recognize that no matter how bitterly we disagree with our opponents, no matter what their political persuasion, they are still Americans, and human beings deserving of respect. (Except the Trig Truthers, they're just subhuman scum.)

OK, enough of the kumbaya bullcrap.

Let's get back to the fight.
Posted by Philip Munger at 1:33 AM

I have no interest in C4P; as far as I can tell, it's just another fan club. Its connections speak for themselves; I notice those connections weren't mentioned in the News-Miner.

Nor is Mudflats a one-idea blog.

That being said, for Videmus Omnia to characterize Mudflats as just an "Anti-Palin Blog" is like saying Bob Dylan is just another folk singer.

It matters not to me who you are for in the long run you won't be effective. 11% of the population will never be enough to win POTUS, and that's the percentage that supports the uber-right wing extremism that is the core of your readers. I'm a moderate who has always voted Republican until McCain sold his political soul by trying to throw a hail-Mary pass named Palin.

As far as the Trig conspiracy goes, I can comment on that since I am a medical professional with years of experience in L&D. What Palin did last April, on this day, was unthinkable. How a supposedly pro-life woman could avoid medical care for her 35-week preterm high-risk fetus is beyond me. She jeopardized his life, and if you don't believe me, take a copy of the April 22, 2008 ADN to any obstetrician/gynecologist and ask their professional opinion about the actions of Palin. Be ready. Trust me, you won't like what you'll hear. Her actions were egregious and suggestive of someone who didn't care whether her fetus lived or died.

The faked pregnancy conspiracy was born from the fact that folks COULD NOT believe a woman could do such a thing, therefore, they begun to believe that she wasn't really pregnant. The irony is it would be incredibly easy for Palin to refute this conspiracy theory but she has chosen not to. If someone questioned the parentage of my children it would take me about 5 minutes to prove it. Case closed. Palin loves the attention since it further adds to her need for pity.

I thought I was on Progressive Alaska not C4P!
I don't know what's going on, but If I want to hear Vo, or RAM I will go there.
Not sure why Mudflats and PA are featuring them on their blogs?

crystal, it's just to give you an opportunity to pretend to like them, for a little while.

Please view my blog, I have some fresh ideas and would like some feedback. thank you. I enjoy this blog very much.

Thanks for the link! I'll bookmark it and keep looking every day.

@crystalwolf...I agree. I dont go to C4P...not because of their views, although I dont agree with them. I stay away because even though its been denied by vidom on several different blogs...they are rude and obnoxious if your viewpoint is not of thier liking. Josh may have street cred...but mama didnt teach him any manners.

Nope..I love phils blog...but dont care to hear from vidom or ram either.

I have been censored on C4P repeatedly, and not for saying anything vulgar...just for expressing a negative opinion of the "queen" or for daring to mention an actual fact.

Their attempts to promote themselves as defenders of "freedom of speech" ring hollow to me.

My question is....when AKMuckracker was outed by Doogan...were they defending freedom of speech and anonymity.....or were they laughing and cheering?

If the Palanites would produce just one piece of tangible and irrefutable evidence that the kid is hers, then we'd all go away.

But she hasn't and we aren't.

The only thing that is clear is that SP is a pathological liar.