America is a Tinderbox 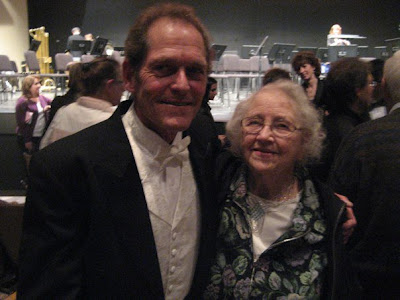 She had been playing croquet with friends at the retirement home in Des Moines, where she had been residing since March.  She had won the first game, and was having a wonderful time, when her huge heart gave out on her.  She passed out and away on a warm, sunny morning.  She was happy up until the time she was called away.

She leaves her daughter, Judy Koenig, three sons - Phil, Steve and Bob, twelve grandkids and one great-granddaughter.  She was preceded by her husband, Gene, and son, Gene.

Judy and I got to spend Christmas break with mom.  Our kids, Julia and Alex visited her within the past two weeks.

She was finishing one of the finest of the hundreds of hand-stitched quilts she had made over the past decades.  She had hoped to enter it in the Washington State Fair, where she has won awards in the past.  We're going to try to encourage members of her quilting club to finish it for her, so it can be entered: 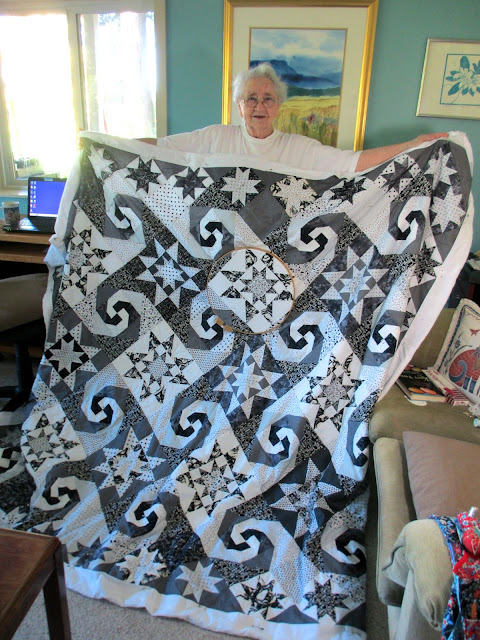 My favorite recent picture of mom was last August, when I accompanied her, Judy and Julia around Mt. Rainier: 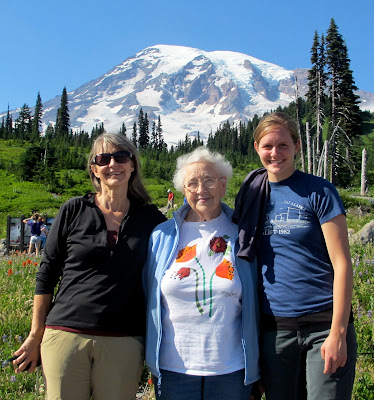 As Bolivian President Evo Morales sits marooned in a Vienna airport on the dawn of July 3rd, 2013, having possibly avoided aerial interception over the Atlantic Ocean by U.S. fighters or missiles, it might be fitting to think about the fate of Iran Ar Flight 655, 25 years ago today (emphases added):


Iran Air Flight 655 was an Iran Air flight from Bandar Abbas, Iran to Dubai, United Arab Emirates. On 3 July 1988, at the end of the Iran–Iraq War, the aircraft serving the flight, an Airbus A300B2-203, was shot down by U.S. missiles fired by the United States Navy guided missile cruiser USS Vincennes as it flew over the Strait of Hormuz.

The aircraft, which had been flying in Iranian airspace over Iran's territorial waters in the Persian Gulf on its usual flight path, was destroyed. All 290 onboard, including 66 children and 16 crew, perished. Ranking seventh among the deadliest disasters in aviation history, the incident retains the highest death toll of any aviation incident in the Indian Ocean and the highest death toll of any incident involving an Airbus A300 anywhere in the world. The Vincennes had entered Iranian territorial waters after one of its helicopters drew warning fire from Iranian speedboats operating within Iranian territorial limits.

According to the United States Government, the crew incorrectly identified the Iranian Airbus A300 as an attacking F-14 Tomcat fighter (a plane made in the United States and operated at that time by only two forces worldwide, the United States Navy and the Islamic Republic of Iran Air Force). The Iranian government maintains that Vincennes negligently shot down the civilian aircraft.

The event generated a great deal of controversy and criticism of the United States.

25 years later, we have another event that is quickly generating criticism of the USA - the forcing down of the aircraft flying the president of Bolivia back to his home state, after attending a conference of natural gas exporters last week, in Moscow (NOTE - if you are on a US military base overseas, you will not be able to link to the article quoted next.  To attempt to do so may lead to an investigation of you, so just read the excerpt, OK):


Bolivia reacted with fury after a plane carrying the country's president home from Russia was diverted to Vienna amid suspicions that it was carrying the surveillance whistleblower, Edward Snowden.

France and Portugal were accused of withdrawing permission for the plane, carrying the president, Evo Morales, from energy talks in Moscow, to pass through their airspace.

Officials in both Austria and Bolivia said Snowden was not on the plane. The Bolivian foreign minister, David Choquehuanca, said: "We don't know who invented this lie. We want to denounce to the international community this injustice with the plane of President Evo Morales."

In a midnight press conference, Bolivian vice-president Alvaro Garcia said Italy and Spain were also denying the plane permission to fly through their airspace. He described Morales as being "kidnapped by imperialism" in Europe.

"The ambassador for Spain in Austria has just informed us that there is no authorisation to fly over Spanish territory and that at 9am Wednesday they would be in contact with us again," defence minister Ruben Saavedra said. The Spanish government had made "revision of the presidential plane" a condition of granting it passage, he said.

Choquehuanca earlier told reporters Portugal and France had abruptly cancelled air permits. "They say it was due to technical issues, but after getting explanations from some authorities we found that there appeared to be some unfounded suspicions that Mr Snowden was on the plane."

Choquehuanca said in a statement that after France and Portugal cancelled authorisation for the flight, Spain's government allowed the plane to be refuelled in its territory. From there the plane flew on to Vienna. He said the decision by France and Portugal "put at risk the life of the president".

Watching this story break and develop on twitter Tuesday evening, I was struck by how quickly Latin American leaders reacted.  Needless to say, we're still waiting on one of them to support the weird event, universally accepted to have been prompted by American actions, but which have yet to be (midnight 2-3 July PDT) acknowledged by the U.S. government.

Thinking back to the shootdown of Iran Air Flight 655, I remember being appalled.

Just over two years later, we convinced Saddam Hussein that if he invaded Kuwait, we would only consider it a dispute outside our realm of serious interest.  So he invaded.

Since then, we've been killing scores of thousands of Arabs and Muslims, from the Philippines to Libya.  The resulting blowback has killed or injured Americans.  Our response has not made us tangibly safer.  It has directed a few trillion tax dollars into the pockets of people who aren't making us less vulnerable.  They're supposed to make us feel like we're safer, though, so they can keep conning us.  Hence the importance of keeping Snowden's independence throttled, short of capturing or killing him.

The Ticonderoga-class cruiser that shot down Iranian flight 655 was known by its crew as "Roboship."   The movie, RoboCop, had come out the year before the shootdown.

Defenders of Obama's illegal policies, which have been brought into the spotlight by Wikileaks, whistleblowers, independent fact finders and journalists, and that rare instance when MSM journalists actually uncover something through investigating, have less to stand on every day.  They're beginning to resemble robots.

Worldwide reactions to Snowden's disclosures are starting to snowball.  This face will not slow it at all.  In this case, the U.S.A. appears quite ludicrous, let alone irresponsibly arrogant.

It's almost as if we don't care who we piss off over this.

And - hey!  It isn't that Obama's denizens don't want to off Evo Morales.  They just don't want their bloodstains or DNA on the murder weapons.
Posted by Philip Munger at 12:02 AM 2 comments: