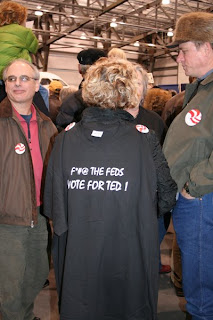 
The Alaska State House has passed a resolution asking the federal government to apologize to Ted Stevens. They also want him to be able to sue the Department of Justice.

The resolution is nonbinding – which is just political posturing. An apology? Wow, can I get one too? And in this time of record deficits should we really be giving Ted Stevens a bailout? REALLY?

Here’s the resolution and, for what it’s worth, my commentary following the bold Shannyn:

Expressing support for Senator Ted Stevens and severe displeasure and indignation with the federal government’s deplorable investigation and prosecution of the Senator.

BE IT RESOLVED BY THE HOUSE OF REPRESENTATIVES:
WHEREAS United States Senator Ted Stevens’ public service began with his military service during World War II; and

SHANNYN: the same veteran who has stated PTSD was invented by this generation.

HR10: WHEREAS Senator Stevens served the State of Alaska for over 50 years as a United States Attorney, member of the Alaska House of Representatives and United States Senator; and

SHANNYN: the same Senator who said to Bill Allen, “They’re not going to shoot us; it’s not Iraq, so what the hell. The worst that can happen to us is we wind up with a bunch of legal fees and might lose, and we might have to pay a little fine, might have to serve a little time in jail. I hope to Christ it never gets to that, and I don’t think it will.“

SHANNYN: Since when does NOT DYING deserve a federal apology?

HR1O: WHEREAS Alaska and its communities owe a debt of gratitude to Senator Stevens for his tireless efforts on behalf of the state; and

SHANNYN: How about Alaskan fishing communities? How about Kodiak? Talk about debt…

HR10: WHEREAS the United States Department of Justice has moved “to set aside the verdict and dismiss the indictment [against Senator Stevens] with prejudice”; and

SHANNYN: Because Attorney General Eric Holder believes in the Rule of Law from Guantanamo Bay to Girdwood, AK.

HR10: WHEREAS the prosecutors in the case withheld information that should have been provided to the defense during the trial; and

SHANNYN: Agreed that this is a reason to dismiss the trail, re-try the case, and prosecute those who committed crimes against Justice. NOT a reason for an apology or right to sue.

HR10: WHEREAS the Department of Justice’s prosecution team was found in contempt of court for willfully failing to abide by the laws and procedures of the federal court; and

SHANNYN: AGAIN, any federal or state official in ANY case who cheats to win should be prosecuted. This isn’t baseball…but if steroids can keep you out of the Hall of Fame, cheating justice should put you in the Hall of Shame…otherwise known as jail.

HR10: WHEREAS, under 5 U.S.C. 1502(a)(1) (Hatch Act), a federal “employee may not use his official authority or influence for the purpose of interfering with or affecting the result of an election”; and

SHANNYN: OH, REALLY? I think under this pretense, the federal government should apologize for the Florida Fiasco in the 2000 election, and the Ohio Shenanigans in the 2004 election! The LIST GOES ON…

HR10: WHEREAS questions have arisen as to whether provisions of the Hatch Act have been violated; and

SHANNYN: We should investigate ALL cases of alleged Hatch Act violations. The sacrament of democracy is our right to vote and have it count (just once).

HR10: WHEREAS the dismissal of these charges does not restore Senator Stevens’ reputation and legacy or compensate Senator Stevens for his legal expenses and loss of future income; and

SHANNYN: Ted Stevens should be grateful Attorney General Holder is not re-trying him and go away quietly…maybe pray the airport keeps his name. Count your lucky stars Uncle Ted.

HR10: WHEREAS the federal government cannot be sued without its permission, except as

SHANNYN: Too bad you can’t sue for expensive lies measured in human lives about Yellow Cake Uranium and the outing of a CIA agent or the illegal wiretapping of American citizens…since those don’t count…well, suck it up Uncle Ted. Can you say, “Welcome to Walmart?”

HR10: BE IT RESOLVED that the Alaska House of Representatives demands that the federal government grant Senator Stevens permission to sue the United States Department of Justice for redress; and be it

SHANNYN: THIS IS THE SAME LEGISLATIVE BODY THAT IS TRYING TO BRING BACK THE DEATH PENALTY!!! IT’S AS IF MISTAKES ARE NEVER MADE BY PROSECUTORS WHETHER NEFARIOUS OR THROUGH NEGLECT! How can they possibly talk out of both sides of their asses?

HR10: FURTHER RESOLVED that federal employees involved with Senator Stevens’ prosecution be investigated for violations of the Hatch Act and, if found guilty, be subject to penalty under the Act; and be it

HR10: FURTHER RESOLVED that the United States Government should issue a formal apology to Senator Stevens and the People of Alaska for this heinous miscarriage of justice.

SHANNYN: I think Mr. Stevens should wait as least as long as the interned Japanese during WWII did for their apology. Their crimes were being immigrants…his crimes? Well, we’ll never know…at least not until Ben Stevens’ looming indictment and trial.

SHANNYN: I think the Alaska Republicans that sponsored this resolution forgot a couple WHEREAS’s and FURTHER RESOLVED’s…

Here’s what I would add…THE SHANNYN AMENDMENT:

WHEREAS Senator Stevens voted to suspend that which he enjoyed and ultimately set him free-habeas corpus; and

WHEREAS The US Supreme Court reinstated in 2008 that which Ted Stevens thought not important and voted to suspend-habeas corpus; and

WHEREAS Ted Stevens is on record receiving gifts he did not report; and

WHEREAS Ted Stevens was recorded stating, “They’re not going to shoot us; it’s not Iraq, so what the hell. The worst that can happen to us is we wind up with a bunch of legal fees and might lose, and we might have to pay a little fine, might have to serve a little time in jail. I hope to Christ it never gets to that, and I don’t think it will.”; and

WHEREAS The above statement is at a minimum unbecoming and unethical of a United States Senator and at most outright illegal; and

WHEREAS Republican Representative Mike Chenault is sponsoring a bill to bring back the Death Penalty in Alaska; and

WHEREAS The government is capable of making mistakes and of egregious outright prosecutorial misconduct; and

WHEREAS Ted Stevens’ case was thrown out due to prosecutorial misconduct and he is FREE; and

WHEREAS The Death Penalty would make moot the point of throwing a wrongful conviction out due to defendant’s DEATH; be it

FURTHER RESOLVED Senator Stevens apologize to All Americans for suspending that which he was granted-habeas corpus; and be it

FURTHER RESOLVED Republican Representative Mike Chenault apologize for potentially putting Alaskans at risk to wrongful deaths from potential death penalty prosecutions due to the possibility of misconduct on behalf of the prosecution; and be it

FURTHER RESOLVED Ted Stevens apologize to Alaskans for his incriminating statements and unethical behavior; and be it

FURTHER RESOLVED Ted Stevens NOT sue the Federal Government lest they retry him!

I have stated before that this case was botched and should have been thrown out. The complicit lionization of Stevens by the Alaska State House, however, is a farce.

This bipartisan resolution passed with only one NO vote. The only NO vote? Spenard Democrat Mike Doogan-the man I chased into the bathroom of the state capitol last week after he outed my friend Mudflats. Apparently, he’s trying to make up and get in my good graces again.

JUSTICE has not been served to either Stevens or to the people of Alaska.

Sarah Palin and Randy Ruedrich are calling for a new US Senate election?

Fine…Bring it on…Right after a new trial.
Posted by Philip Munger at 8:14 PM

When Ted sends Flowers and Thank You's to Pres. Obama and AG Holder for their service and their honesty in doing their jobs correctly, and for righting the wrong that was done to him by the REPUBLICAN Cabinet and AG, and admitting to the crimes he committed even though the charges have now been dropped due to that same Republican AG screwing him over, then and only then would he get an apology.. until then... suck it

Oh Phil...I feel like the entire universe is upside down. So many things going on....one side screaming at the other side. People arent listening nor thinking objectively anymore.

My god...Stevens is NOT innocent. He is guilty as sin...his own words on tape are proof of that.

Why on earth should he get an apology from the very people who did the right thing, and set aside the verdict, because a REPUBLICAN justice dept. made a mess of things? How sick are some of these people?

And this new AG. What is to become of Alaska should he be accepted?

I am worried for all of you.