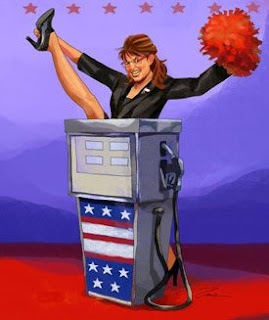 Alaska Democrats are a funny breed. I’d like to say mavericky…but that’s been done. They have to be conservative enough to get elected and smart enough to make head way in a minority-all the while praying the board of game doesn’t target them for an aerial control hunt. Knowing where that line is and walking it, is, in itself, a full time job.

When an Alaskan Democrat is called up for duty in a position appointed by the President, we cheer. It’s like having a player from the Peach Leagues get the nod from the Yankees. Kim Elton, long time senator representing Juneau, is now working for the Department of Interior. When a legislative seat is vacated, there are “rules” that don’t punish the party or the district when their representative either resigns or gets promoted.

Hey Democrats!!! Stop nodding YES like a bobble doll! I know this is basic and obvious, but it’s gotta be said.

There are two stories here:

One: Sarah Palin is running the state like a power drunk sorority


Two: The Alaska Dems don’t have to keep acting like a fat girl on a date!

You know that girl-she orders a salad and then puts out ‘cause she’s just so grateful for the attention! STOP IT!

I’m so proud of us. We’ve been the really unpopular girl; the one who carries a cello around, has cheetos in her locker and bought anti-cellulite cream in the 8th grade. We rarely got picked for a team, but won the seventh grade creative writing contest.

We’ve forever waited for that special someone. We’ve even circled prom dresses in the Sears catalog. We don’t look back - it’s a yearbook without many “we’ll be friends FOREVER” signatures.

The last two years have been different. When Sarah Palin came to Juneau, it was as though Captain Dreamy showed up in an I-Roc with Guns and Roses thumping. The old jocks and cheerleaders didn’t care so much…so we got the date. Sigh. We broke our backs making all of the governor’s dreams come true; ACES, AGIA, etc. And now we know love is fickle.

Palin has the audacity of rope, and she’s hanging herself with it. Her response to 18 year old Levi Johnston accused him of seeking fame and celebrity? That’s rich! Like he wanted to be the world’s best known sperm donor when she threw him onto the national stage as an icon of her family values?

Beth Kurttula stated the obvious when she said Sarah wasn’t qualified for the “Homecoming Court.” Her chances for a replacement appointment to Kim Elton’s Senate Seat were roasted like a weenie at a Wasilla Warriors tailgate party.

Sarah tried to change the rules last week to include the Republicans in the vote to seat former Republican Tim Grussendorf – DENIED! This week, she pulled another player out of some dark orifice. The Juneau Dems had already interviewed and eliminated her selection.

Joe Nelson may be a nice guy. A guy you’d like to have a beer with. Hey, Darling Dems, you don’t have to dance with him just because he was delivered by the governor! The governor has obviously misread the rules. She does NOT get to submit names. She approves someone from a list submitted by the Juneau Democrats!

Once again, Sarah Palin demonstrates that the rules don’t apply to her. Palin is Lucy with the football. Just because she wants us to kick now, doesn’t mean we have to. Charlie Brown never learned that lesson.

Joe is married to Mary Nelson, former representative from Bethel who now works for the Donlin Creek Mine. Nelson voted against defined benefits, putting herself in the camp of the Western Alaskan DINOs who vote with Republicans to get capital projects.

Joe and Mary were married aboard a boat owned by Bud and Paulette Simpson. Last August, Paulette Simpson, of the Alaska Federation of Republican Women, said of the newly selected Palin, “Sarah Palin for her entire political career has been underestimated. She’s tough, she’s tenacious. I believe that she does have what it takes to get out there. Again, her ability to connect with voters and make a case is very, very, very strong.” Well, Paulette, she’s not connecting with the Democratic voters in Juneau.

A source in Juneau told me Joe Nelson was asked if he would become a Republican to run against Beth Kerttula in the next election; he said he would consider it. Nice! How does that work for the long time friendship of Beth Kerttula and Mary Nelson? It’s part of the mean girl strategy; divide and conquer.

IT IS TIME TO BREAK UP WITH SARAH PALIN. She is not your friend. You are never going to ride in her car again. Nor will you get to sit at her lunch table. She won’t pick you for kickball, but she has picked a spoiler to play on your team. TWICE! She doesn’t like you. Deal with it.

Say NO to dictatorship and YES to Democracy! The Juneau District deserves the same policy and protocol that the Wasilla district was granted when Sarah appointed her church elder, Wes Keller. Palin broke up with Alaska…she’s packing for her save-the-unborn-babies speech in Indiana.

We have a two party system. One has no heart, the other no spine. Stand straight. Stand tall. Breathe deep and dump the Governor.

Face It Dems, she’s just not that into you.


Call your legislature…here are the numbers.

The in crowd Juneau Democrats refused to even interview Alaska Natives. The Party bosses refused to listen to the masses and just tried to bless their chosen ones.

The Democrats in Juneau are racists.

Zina Saunders-- this picture is hilarious! You are just wicked!

Anonymous 4/73:16 pm is obviously a Repugnican troll! The nomination of the DINO Joe Nelson was another setup by Paulette Simpson, the Repuke Dragon Lady, the woman that introduced the Governess to the erroneous columnist, talking head, and right wingnut think tank shill Bill Kristol, who then touted her to McCain as the VP candidate.

Paulette and Sarah did this deliberately to make Dems appear bad --- what Sarah really wanted, but could not find, was a good anti-abortion pro-mining minority candidate, and with this person, TOTALLY UNKNOWN TO ALMOST EVERYONE IN JUNEAU, she got at least 2 out of those 3. I don't know his stand on reproductive rights, but I'm betting that it's the same as the Governess, and that he also belongs to a conservative evangelical church.

Sorry, folks, this guy is NOT in sync with Juneau voters, most of whom he has never met, and it has nothing to do with his race! If she had nominated Gary Waid or Andy Ebona, both active Tlingit Democrats, Juneau Dems would have supported her choice. But Melson is NOT from Juneau and knows nothing of Juneau issues.

Thanks, HBAK. I don't delete comments unless they are spam that somehow got through or obviously and negatively untrue. This one borders on that, but I'm not going to remove it. I'll actually read the Frontiersman to see what is there.

busy on other stuff right now, though.

The truth hurts. The Juneau Dems refused to give the Alaska Native applicants even a five minute interview before rejecting them in favor a bunch of white guys.

How come the Juneau Dems only spoke with white people, even though Alaska Natives had put their names forward.

I guess the Juneau Dems only want the Native vote, but not native Representation.

Funny as hell, for sure. The only part that should have pulled back on was that part about the "(deleted) girl on a date". Sounds too much like something Anne Coulter would come up with. We know you're a babe and all. Thanx!