The Guy Who Elected Dan Sullivan....? 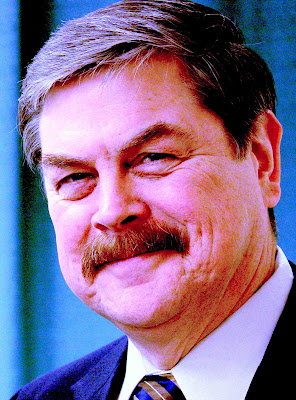 I've heard from several sources that former Alaska Director of Public Safety and recently defeated mayoral candidate Walt Monegan has declined to endorse either of the two finalists in the May Anchorage mayoral runoff election.

If Walt doesn't already know that will probably throw the election to Dan Sullivan, he should.

Monegan has claimed to be pro-union. Croft is a friend of what unions mean to the strength of Anchorage's middle class. Sullivan has not proven himself to be such a friend.

Monegan wanted to rebuild Alaska's approach to our having the worst American record when it comes to domestic violence, sexual assault and child abuse. Croft created and sponsored important milestone legislation, making it mandatory that victims of sexual abuse not be forced to pay for their own forensic examinations. Sullivan fought to continue licensing abuses granted to strip clubs for kids too young to drink.

Monegan, by letting Sullivan gain the upper hand in this runoff, disappoints me. I'm waiting on other Alaska bloggers to join me in calling for Walt Monegan to engage in this important election's conclusion.
Posted by Philip Munger at 8:18 PM

Oh good lord, Walt Monegan is a big boy, why does he need Phil Munger to tell him what to do ?

Gee, let's tell Mr. Munger what to do and how to act, see how he likes that.

This has nothing to do with "telling Walt Monegan what to do."
This to do with the fact that if Walt Monegan is truly as concerned about the people of Anchorage as he professes, then endorsing Eric Croft is the right thing for him to do.

Eric Croft is proven supporter and activist for many of the same things Monegan is. Dan Sullivan is not.

Would an endorsement from Mr. Monegan turn the tide for Croft in this run-off election?

But sitting on his hands certainly won't help Croft, either.

It makes me wonder if Monegan was serious about the purpose of his candidacy, or if it was just an attempt to ride his post-Troopergate popularity on to bigger and better things.

I think Walt was right on the mark election night when he said "when I go in the cubicle and close the curtain, my vote is private and will continue to be so". Or something to the effect. What right does any have asking someone to declare who they are voting for?
Personally, I will NOT be voting for Sullivan for a variety of reasons. But honestly, I doubt Croft would/will be very effective leading our community.
So I feel that I am voting for Croft as a default, since Walt didn't make it in.

I don't live in Anchorage, I only work there. PA was reluctant to get into this, but the plain fact is - Monegan's past actions and words put him a lot closer to Croft than to Sullivan. And Monegan's inaction helps Sullivan, hurts Croft.

Also - please note the question mark in the header...

I like Walt. A lot. I don't really care for Croft, and could not in all conscience have voted for him, and certainly not for Sullivan. Now Croft is the lesser of two evils. I hate having to vote that way.

It's fair to want Walt Monegan to speak about issues, support for unions being one of the many. But really, I think that everyone knows where he stands on that, and most know where Sullivan stands on them too.

Voter turnout sucked. It was an extremely discouraging election in that way, and in the voting down of bonds and voting in a tax cap. Anchorage apathy & hypocrisy at its finest!

I don't like that voters here (and elsewhere!) want someone's endorsement rather than doing the research themselves to find out which candidate best meets their criteria. Endorsement schmorsement!

it wouldn't kill monegan to do the right thing.
i listened to a statement by my ak house representative, max gruenberg, prior to the vote on WAR [on gavel to gavel and rebroadcast by KUDO]. very moving, heartfelt remarks -- he said ross has been a friend and they have known each other for decades in professional and social circles. and he made the difficult choice of having to vote against his confirmation based on public concerns and testimony.
if gruenberg can get through all that, monegan certainly can find a way to help prevent sullivan from becoming mayor. that would prove to me he is a decent fellow and concerned about the city.