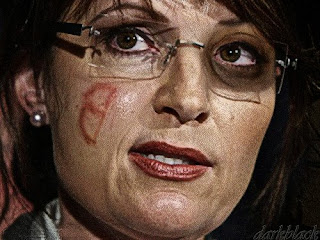 Alaska Governor Sarah Palin thinks that when opponents of her policies, nominees or actions mobilize effectively, that this means some sort of process has been derailed or manipulated. Here's from her reaction to the the successful battle against Wayne Anthony Ross' nomination to be Alaska Attorney General:

I’m surprised that legislators in this case really did not seem to represent their constituents and allowed themselves to be swayed by side issues.

When questioned by the press on this issue last week, Gov. Palin stated, far less concisely, that:

Uh, members of the public who came forward with, uh, you know, the blogosphere, and the, in the e-mails back and forth, uh, and claiming that Mr. Ross did this or did that, and, uh, that he very easily and accurately refuted the lies told about him but, uh, you know, uh, once a bell is rung, it is really tough to unring the bell. Very unfortunate and unfair for any public official, anybody, to have lies told about them. It's sometimes tough to correct those lies in a timely manner, and the damage is already done.

And at the end of the week, in reaction to a new ethics complaint filed by a special needs mom, Palin, through her press chief, has stated that:

obviously the purpose of this complaint and the previous ones is to distract the administration and the public, and to paralyze the Department of Law and the executive branch.

She must have forgotten about the complaint she filed against herself, the sole purpose of which was to "paralyze" the legislative branch.

Alaska's progressive bloggers, who don't give ourselves nearly as much credit as Palin seems to, have been active this past week. On many issues. I guess paralyzing state government is hard work.

this is the first time we have run out of stove oil before winter was over, usually we run out of gas.

He said there are other programs for people who are needy and “not for any layabouts.”

“I’d rather tell the guy, go out there and cut your own wood or do something for yourself. … I don’t know how many of the 200-plus villages have a wood supply within a rock toss, but there’s a lot of them because I’ve been to a lot of them,” he said.

Victoria, in a post called, Over the river and through the... oops , we don't have woods! described some of the everyday hardships she deals with on the lower Alaska Peninsula.

AK Muckraker at The Mudflats, delved into Kelly's racist remarks:

Residents of rural Alaska were interested to note that Rep. Mike Kelly (R) from Fairbanks (who won the election by one vote), is irritated with the idea of appropriating state energy assistance money to rural Alaska and suggested that people shouldn’t rely on state aid, but instead should “cut wood.”

If you are picturing the rural villages of Western Alaska with dwellings nestled among stands of large hardwood trees and dense foliage, you may now disavow yourself of that supposition. In places like Emmonak, which has a few scrubby alders, and vast areas of flat swampiness as far as the eye can see, they wait for flooding to carry logs down the river sometimes. Otherwise, it’s a long labor intensive trip via fuel powered snowmachine, lots of manual labor, and a bunch of time using a fuel powered chainsaw to get the wood, which has to be hauled for long distances by sled, ready to use. So all this wood ends up with a huge carbon footprint, lots of time, and needs a strong healthy person on the working end.

Celtic Diva's funniest post of the week was based on her having read some comments at the famous freeper site, The Free Republic. I used CD's post as a basis of yesterday's sketch, What's the Frequency, Sarah?

We're not that Stupid has a hilarious riff, combining the freepers, the Palin whining and other issues into one package.

I especially like the name - Teabaggeristan! A Bodenstown Perspective posted the same video, along with an essay suggesting Todd and Sarah might consider moving to Teabaggeristan.

David has posted an essay, Musings of a coal neophyte, at Journey on the Wild Coast blog. I think that blog is going to get more active soon. hopefully there will be more contributions from David.

Shannyn Moore, at Just a Girl from Homer, posted what may be the most scathingly humorous essay on Palin's history with ethical issues, called, Palin Blames Bloggers for W.A.R. Loss. I've already written about the essay.

Mamadance and Think Alaska both covered the sad harassment, torture and death of a moose at Colony High School. Both my kids graduated from CHS, so it upset me too.

David Cheezem, who ran against Rep. Carl Gatto (R - W.A.R.-istan), wrote a great post for Think Alaska on Gatto's pathetic record this past term. David's post was in response to Gatto's use of his constituent newsletter to promote the Teabaggers' party in Wasilla:

He could have written his constituents about what he's doing to support the Valley. He could have told us how hard he was working for public transportation. He said in the campaign that he would support a regional transit authority to help connect Anchorage and Palmer. We haven't heard a peep from on that subject sense.

There's nothing in this message to his constituents about how hard he was working to find matching funds for the Farmland Trust. (In one of our television debates during the campaign, it became clear that he didn't even know what the Farmland Trust was.)

There's nothing here about supporting our schools, building and maintaining our roads, stimulating our economy, maintaining a livable wage. In other words, he had nothing to say about the meat and potato issues facing people of all ages, races and income levels in our district.

The only thing he thought worthy of talking about was a publicity stunt organized by national TV pundits and astroturf lobbyists with no healthy connection to our state.

By the way, Mr. Gatto's district received the lowest per capita funding in this year's budget in Alaska.

Andrew Halcro appears to be getting ready to announce he's a candidate for Governor. I'm not sure whether he will try as a Republican, or as an Independent. He's getting ready to close down his blog. Not listed here as progressive, it is, in the eyes of many, Alaska's most prestigious longtime web log.

The combination of Andrew's blog and his always courteous, generous treatment of reasoned guests on his KBYR radio program, have had a tremendous impact on Alaska media and political discourse these past eight months -- months that have been so different from any preceding time in Alaska.

Progressive Alaska is adding Wesley Loy's new blog, Deckboss, to the Important Alaska Sites - Not Necessarily Progressive category. Wes has reprinted the ADF&G assessment for the Yukon River salmon return, that just came out. There will be no Yukon River commercial season in 2009. Meanwhile, the Bering Sea pirates will continue to be able to dine on steak and lobster imported from tens of thousands of miles away, being filmed like they're some kind of heroes, as they discard tens of thousands of valuable fish over the sides, to rot on the sea floor.
Posted by Philip Munger at 8:21 AM

I think you mean Kelley, not Kott.

And no, you guys certainly give yourselves more credit than Ma Palin does.

Not Kott, not Kelley, but Kelly. Thanks. fixed...

Great summary - thanks!!! Love your blog and your humor too.

Yeah Phil, what you said!

Besides, if you don't exist, all I will have left to trash, is Palin. tsk tsk

As for a community running dry on oil.. this situation can compound it-self... Think about the communications aspect... All generator operators, in the bush, know to not let the power run dry in the earth stations. Earth stations are the communications hub for each village... If urban Alaska had to start conserving oil so the communications hub doesn't go down, someone is going to loose their job, errr heads are gonna roll... Mass Limited energy for urban people is not a issue. Period. Think MEA and all that would explode, if they (MEA & their consumers) ran out of fuel !

I'm at a loss of words for your average, clueless, heartless Alaskan. However, bloggers, allow me to feel all is not lost, in Alaskan urban denial.