Grussendorf - If The AK Dem Senators Swallow This Lie, They'll Deserve Him

According to Sean Cockerham, from the Anchorage Daily News, this evening:

A big issue hanging over Grussendorf among Democrats is that he was a Republican until just weeks ago. Grussendorf said he thought he was undeclared

but was mistakenly registered as a Republican

in 2006 when he asked the state for an absentee ballot to vote in the Republican primary.

In order to keep himself from being cut off from stories for a week by the Palin "communications" machine, Cockerham also wrote, "It is a little hard to read."

Not on the important element, Sean. 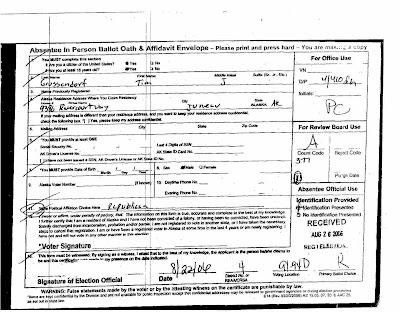 The Juneau Democrats cannot accept or recommend this man by their rules.

For Alaska Democratic Senators to accept Palin's recommendation would create a volatile situation.

Meanwhile, one of my Juneau informants tells me that when Shannyn Moore tried to corner Mike Doogan today in Juneau, he locked himself in a rest room. I can't wait to find out the real story from Shannyn.

#1 - Shannyn says the hallroom chase with Doogan is far more hilarious. She has it on tape. Can't wait!

#2 - (not Shannyn) Sarah's Grussendorf slice of stale bread is toast. Not even close to marketable.

Posted by Philip Munger at 8:48 PM

Ok....now THAT is funny! Doogie hides in bathroom and Palin refuses to talk to Legislators about the stimulus money......cowards.

where eles would such a turd hide?

this is priceless, too. what is he thinking???

I can't believe that would have stopped Shannyn.

Did he climb out the window?

I'm guessing he might have had to duck into the loo in a hurry. Probably crapped his pants the minute he saw her!
Go Shannyn!! Maybe you can keep him locked in til the end of session.

Okay, so does this mean that he doesn't know what party he was and the ballot he used four months ago in November 2008?

Let's just go by the voter registration card that he produced in November 08.

Grusssendorf's carried around his Voter ID card since 2006. Apparently, he never pulled it out of his wallet until he saw an opportunity to be handed a plum. He apparently "just never noticed he was a Republican" when he was voting in the last general election, either.

Blaming someone else for your ineptness?
Huh.
No wonder Sarah likes Tim.
They share that trait.

Any early word about the meeting with Stevens today?????

It's ironic Doogan fled from being exposed, especially after his sadistic exposure of AKM. Apparently he doesn't like the taste of his own medicine.

Ok, so Grussendorf is a proven liar. I could see if it was a box to check and the check was kinda off, but this was blatantly written in, so he is lying. Either he lied then and said he was republican so he could vote in the primary, or he is lying now by saying he intended to register as independent. Wait..that's the same lie. What an idiot. Please please please AK Dem's don't allow this liar to be confirmed.

I wondered if there was such a law, for christ sakes he was a repug when the appointment came open, 2-3 wks ago and changes to dem, and GINO picks him? WTF? She must think everyone as stupid as her!
Ha, I can wait to see Shannyn chasing doo-doo! LOL!
Maybe that wid will show on KO show??? THAT would be AWESOME!!!!

The democratic party rules are clear: must be registered Democrat for a year to be eligible.

Even if he had changed his registration to R to vote in the R primary in 2006, he has never explained what happened in 2008.

The year that there were contested Democratic primaries, and the year of the most exciting presidential race in recent history.

So when he tried to get the D ballot, or enter the caucus, he would have been told he was not eligible because his card said R.

If it were a mistake, then why did he wait so long to correct it? The story just does not jibe.

There is a typo in that form- between where he wrote in "republican" and his signature, it says something about being discharged from incarceration (should be) unconditionally- it says "unconditioanlly"- does no one proof this stuff? Come on, it's a government document!

Time to vote. Then Palin can choose someone else.

If I were her I would just continue to choose people I wanted in the seat. Line up all the R's in Juneau to switch sides and run em before the D's in the legislature.

In the meantime the D's are down one senator.

I thought that Doogan hid in his office, not the loo!

Les Gara says that other Dems have told Mike he done wrong, but that he needs to hear it from constituents. I hope that he gets a lot of emails and phone calls from Spenard...