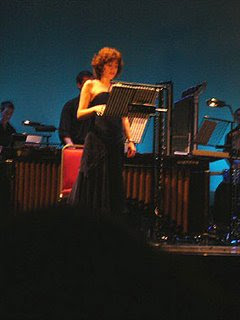 My dear friend, political soprano Deborah Fink, joined others today in London to perform music of peace, in a benefit for the Al Ahli Hospital in Gaza, and for Intergratsia School in Israel. It was in the glorious acoustic environment of St. Marlybone Parish Church, on Baker Street.

Ms. Fink was joined by Siobhan Mooney, a rather political mezzo-soprano, Richard Black, piano, and Rev. Garth Hewitt, on guitar.

In addition to my music, the artists performed work concentrating on children. The concert was titled:

Benefit Concert
'Remembering the Little Ones'
a commemoration of, and a tribute to, all children 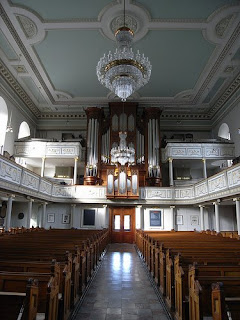 Here's a picture of the sanctuary of St. Marlybone, known for its choice acoustics.

Deborah sang two movements from The Skies are Weeping, in their reduced piano and voice version. Here they are, in their versions for percussion and soprano, sung by Ms. Fink in London, in 2005:


Around you the father gods war. This
Father. That father. The other father.

What more dangerous place could
A woman stand, upright, than on that sand, as if
She were still antiphon to that voice, the other
Mind of that power. The very idea!

Crush her back in to her mother!
Crush her. Crush her. Consensus. War.


Song: The skies are weeping
The birds have flown away
With rain-sodden flowers in hand
I wait for you, Rachel…

The rain drops trickle
Washing the scent off the mourning tulips
Pounding the healing earth
The howling winds and trembling blades of grass
Calling for you, Rachel…

Dust dancing around my knees
Walling me in, and my grief
From the weeping heavens faintly at first
I hear you, Rachel…

You give strength to my tears
And resolve to my limbs
As I stand up with my broken tulips
The skies are clearing
The earth is sprouting fresh blades of grass
That whisper your name, Rachel…

The winds are gentle
Reassuring in their calmness
Heaven and earth rejoice today
As you’re with me again, Rachel…

Posted by Philip Munger at 8:02 PM

Wow! What a talent! All that and politically active as well. Congratulations to you.

And thanks for the musical interlude. Must say that all of the political drama has me burnt out... I don't know if I can take another big one after the past few days.

Phil...thank you for this. Rachel Corrie is one of my heroes. I have read just about everything I can about that wonderful young woman.

What an honor to have such talent interpreting your work in such an amazing setting!

Too bad the money wasn't used to fund a Muslim Pali school that doesn't teach their kids that Jews are monkeys and pigs.

The money will go right to Hamas. How stupid can everyone be. Spend the money to help move the so-called Palestinians to Jordan or some other Muslim country. Why are my fellow Jews supporting Arabs when Israelis are in need.

over 30 artists around the world dedicated their songs to rachel corrie since 2003
read the article for a complete list of the songs
demos, streaming audios and even free mp3 downloads from artists' pages