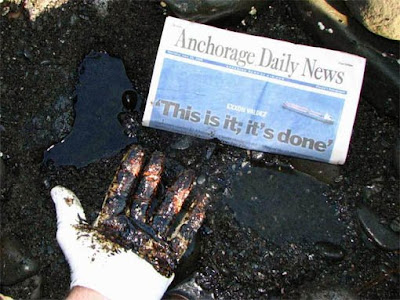 [Shannyn will be speaking this evening at Vagabond Blues in Palmer. The free event, sponsored by the Renewable Resources Coalition, starts at 7:30 pm]

Opening your mailbox to an Exxon Valdez Oil Spill Settlement check is like getting a royalty payment for the snuff film your kid brother was in. Hey, you're getting paid...but he's still dead...and you got to watch it.

The spring of 1989 was beautiful. I left the Ballard Lochs onboard the M/V Westward the night my finals at Seattle University were completed. Going north through the Inside Passage of British Columbia and Alaska was like being on the edge of a Technicolor movie...moving with the color...winter turning green. Whales and porpoises were escorting us at a leisurely 9 knot pace. I was going home to the fishing grounds.

Every spring I ache for the fishery. It doesn't matter if I'm driving my daughter to school, shoveling snow, or vacationing in Hawaii...I long for the heave of waves under my feet; the sound of a Deutz generator and voyeuristic eavesdropping over the marine radio; wheel watch at midnight based upon the outcome of a cribbage game, pilot bread and peanut butter, salt sprayed cigarettes, blood in my caffeine stream.

This year is different. The Supreme Court decision in June 2008 all but pardoned Exxon's negligence. The highest court in the land condoned the half-assed clean up. The RATS-Roberts, Alito, Thomas and Scalia, (Alito recused himself, confident that Souter and Kennedy would fill the business friendly void) winked at their corporate masters as the Judas Court betrayed Justice. This year I long for the wholeness that was promised.

On the morning of March 24th the galley of the Westward was full of fishermen. We were docked in Sitka and picked up the local news feed on our television normally reserved for Mel Gibson videos or the Lonesome Dove series. Coffee, cigarette smoke, fishy raingear and a frantic need to know charged the wheel house.

We had just enjoyed a herring opening that promised a money season. Panic set in and with it, paranoia. A man named Rex was convinced it was a plot to bring oil platforms into Prince William Sound. The Goddamn environmentalists were blocking the burning of the oil...how much was there? Where was it going to go? There was a storm coming from the North. Where the hell were the containment booms? Where were the emergency response teams? Why were we still sitting in the harbor? Hundreds of boats, days before racing to the herring grounds, now fueled up to do something. None of us sure what that would be, but willing to do anything to protect our livelihood. You see, being a fisherman isn't what you do; it's who you are.

Greg Palast, Ricki Ott, and Sharon Bushell have all investigated, reported and lamented the days before and after the Spill. The Myth continues...a drunk captain...an endlessly delayed response...a big storm. The truth is mired somewhere under the sediment of propaganda and media campaigns. What should be remembered as the greatest example of environmental terrorism is now better known as a drunk driver story.

Exxon doesn't have marked offices in Alaska. In 20 years, the state and Exxon have not reconciled. The Federal Government and the State of Alaska were complicit in the spill and the cover-up. Precautions, provisions, and preventative measures had all been made law. It seemed that wasn't the issue...the problem was finding a government agency to enforce those laws. Exxon's cost cutting measures insured a disaster; laid off spill responders; not fixing the disabled Raycas radar; the containment boom barge iced into dry-dock. All those profit enhancements were expected of a company that answered only to it's shareholders. The government agencies that looked away from negligence and their responsibility have never been held accountable.

Our delegation to Washington DC could have introduced a law over the last 20 years to force Exxon to pick up their bar tab and pay for their crime. They were woefully silent. Instead, they debated things like gay marriage, vaginal rights, Bill Clinton's impeachment over extra-presidential activities, steroids in baseball, and Terry Schiavo. Meanwhile, dozens of Alaskans, displaced from their identity, committed suicide while waiting for justice.

When Governor Palin was asked by Katie Couric what Supreme Court decisions other than Roe v Wade she disagreed with, she couldn't think of one. NOT ONE! She was a moose caught in the headlights. That didn't work out too well for the moose or the vehicle. The Alaska fisherman lost their voice once again. Thanks, but no thanks, Sarah. Her siding with Pebble Mine was enough...the icing on the cake was the wasted chance....a chance to tell America our story...an Alaskan story...thousands sick from clean up...tens of thousands bankrupt from a dead fishery. Sarah Palin is to Alaska what Velveeta is to cheese; sadly unsatisfying and empty of nutrition. She had the national stage to plead Alaskan's case to citizens who had long forgotten the images of a once pristine Prince William Sound turned into a thick, black, rolling sea; the oiled sea otters and birds, unrecognizable seals and whales; an initially deformed and diseased herring run that became extinct-costing Cordova $100 million a year. Exxon exploited Alaska and turned pain into profit. The state's willingness to do business with Exxon was like having your parents rent the basement to the guy who date raped you on prom night. Am I clear?

Tonight, I sit saddened and physically drained as I mark another March 24th on the calendar. Only this time, I know we will never be whole again.

So on this 20th anniversary of the Exxon Valdez "fetching up" on Bligh Reef, I light a candle. I listen to songs driven from the depth of artists reaching for reason, and I grieve the suicides of at least a dozen men left powerless to the Spill. I ask my fellow citizens to remember a pristine coastline they have never seen...one as long as the Western seaboard, and I pray for protection. Many Alaskans have lost more than I, but what I have lost has left me less then I was 20 years ago...just a girl from Homer...a girl with a dream to catch fish.

Posted by Philip Munger at 1:08 PM

Shannyn really captures the emotion of this day; an anguish rooted in melancholy heartbreak, anger and devastation...thanks for posting this Phil.

And here we are today- July 24, 2010- on the coast of the Gulf of Mexico... my home. Have we learned anything form Cordova? Are the corporations with more constitutional rights than the individual continuing to rape our nation with the help of our government? We are out here cleaning this mess up - and its funny how BP is telling us the same thing Exxon told Cordova. It's time we use what we learned. I don't want a Gulf coast picture resembling the one at the head of this article. I't not done yet for us. Not yet.

OK so I'm back - I wrote post #2. I’m from the Florida Gulf Coast and yesterday I watched a taped segment from the "Oil Spill Economic Recovery Task Force" dated 7/28/2010 held in Destin FL. Ken Feinberg, the new Administrator of Gulf Coast Claims, was there fielding question. When a FL Senator, Durell Peaden, voiced his concern about BP covering long term sickness related to the clean-up effort, Ken Feinberg looked him in the eye and spoke boldly "(that's) Not My Problem". He stated very clearly that his only concern with health claims are those that are filed within a statute of limitation - a 3-year period was mentioned ... and for those health issues that arise 5 - 10 - 15 years down the road, the STATE needs to begin thinking about how IT wants to handle these claims. So basically – we have already been notified that the burden will be on us. UN-FREAKIN-BELIEVABLE! What percentage of the Exxon Valdez workers got sick right away - and what percentage had related sickness show up years later??...I'm assuming 3 or more years later. These guys aren't dumb. Not only will these people be sick - they may even be unable to work due to the illness - where is the compensation then?
There were BP representatives at the forum and to make things worse – these representatives used the phrase “make you whole” – I nearly fell off my couch! So far, BP is using the same liability minimizing tactics that Exxon used… probably the same corporate lawyers – who knows. But what I do know is that big oil is doing it again! Lessons learned from the Exxon Valdez aren’t really lessons learned unless we apply them. How do we apply them?? I really don’t know. Does anyone out there know? How do individuals fight against some of the biggest corporations – and against our own govt who protects them and has vested interest in them? We need to step out of our comfort zones because this is going to happen again. And all this precedent being set is not in out best interest.
And I haven’t even touched on the environmental impacts – I just cant go there right now.
I may post this same text in another blog somewhere – we need to let people know.