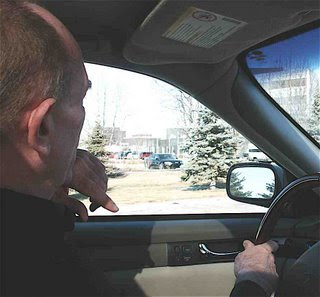 
Yesterday the Anchorage Assembly voted to cut funding for Anchorage schools by $3.8 million.

On July 20, 2004, the Anchorage assembly, voted to exempt developers John Rubini, Leonard Hyde, and Ted Stevens brother-in-law Bill Bittner from the requirement to pay property taxes on one thousand and sixty-eight housing units they own.

Each housing unit is worth about $170,000. They received the units almost for free, compliments of Uncle Ted and they collect over a half million dollars per month in rents. If their units were taxed at the same rate every other apartment owner in Anchorage pays, each unit would produce about three thousand dollars per year for the Anchorage treasury.

Three thousand dollars times one thousand and sixty eight units could be producing over $3.2 million per year for the Anchorage treasury, but the Anchorage assembly would rather kiss Rubini's a - - than educate your kids.

image - Ray Metcalfe, explaining some of Anchorage's crooked political real estate deals to me 11 & 1/2 months ago

Posted by Philip Munger at 6:31 PM

I'm all for cutting the schools budget...a bigger cut would have been better.

But I do appreciate Ray digging out these details as well. More power to you Ray...go get em.

And what reason is given for these exemptions? I'm thinking without a reason there could be a pending lawsuit here.

there never was a real reason.

Ray keeps on exposing crooks. My Party cares when it is a Ted Stevens, hides it when it is somebody else, somebody closer to the fold. I despise politicians who abuse their power, whether it is Vic Kohring or Mike Doogan. At least Kohring never ratted on anyone, eh...?

"I despise politicians who abuse their power"...we don't agree on much, but we agree on this.

I'm sure this is relevant, to: