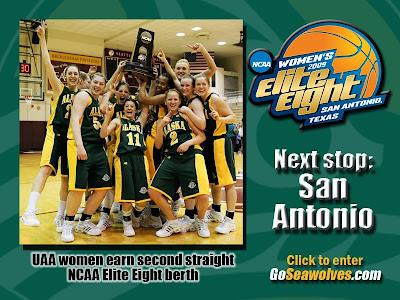 Sorry. I had to do that. Some of these kids are my students, or have been my students. As a few PA readers already know, I have a warm place in my heart for Alaska NCAA champions, including our daughter Julia, who turned 23 today.
Happy Birthday, Julia!

Progressive Alaska covered this. Immoral Minority did too. So did The Mudflats. All three blogs seemed miffed or disturbed by the development. Progressive Alaska ran Howie Klein's essay on the Senators behind this group, Joe Lieberman and Evan Bayh in particular.

Sen. Begich managed to get onto the Rachel Maddow Show within hours of our posts, and handled the situation like the consummate politician he is:


Maddow and Klein will continue to follow the ConservaDems closely. So will Progressive Alaska.


Part Two; No Thanks, But Thanks - Palin and the Economic Stimulus Package:

APRN's Dave Donalson put out a report for Friday's edition of Alaska News Nightly that encapsulates the lies, backtracking, selfishness and plain old idiocy of the Palin administration's handling of accepting the Federal economic stimulus package as an appropriation. So far. They are likely to look even more foolish next week. Unfortuately, now that APRN has cut back even more, the report isn't up yet.

Andrew Halcro describes how the public announcement went down:

This was an email I received this morning from a legislative leader:

Here’s the scoop on the Big Stim funding. Until 24 hours before her press conference, the Governor was going to accept most everything, and reject a few items that we all pretty much agreed were not acceptable. Most of the Big Stim money is really pretty benign and does not require unsustainable new permanent programs.


The issue became a big tug of war for control of the Gov between folks in state government and Sara PAC. Sara PAC won, literally hours before the announcement was made. Alaska was sacrificed again to the godless pagan illusions of her national ambitions.

That's an example of the sort of dilemma a hooker who has to raise $55,000.00 per day faces. Her pimps ended up having the final say-so, even though she may have a milligram of love for somewhere for her John. 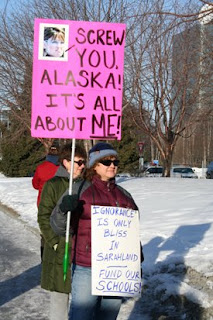 All the progressive Alaskan blogs covered one aspect or another of Palin's funding refusal. The amount of money refused remains somewhat clouded. The fact that it remains so several days after the Obama administration conveyed all information to the Palin people, doesn't lend any credibility whatsoever to the Palin administration's ability to crunch numbers on anything they're involved in, including AGIA, does it? The reality of how this information was triaged between state employees and SarahPac might keep Andree McLeod busy for a year, and Palin's legal fees eating away from her PAC funds ("Don did it, so - So Can I!" is what Sarah might be thinking).

So far, the best coverage of Saturday's demonstrations and public meetings in Anchorage, at or near the Loussac Library, has been by The Mudflats. The photos are superb!

image from The Mudflats

Posted by Philip Munger at 7:42 PM

Thanks, Phil! Wish you could have been there.

Begich 'handled the situation' is it?

The consummate politician he is?

Not any of his 'handling of the situation' explains or justifies his actions which have been in direct contradiction to all the flowery speechifying.

You get the government you deserve when you refuse to hold your representatives accountable for their actions.

Their 'words' and 'explanations' aren't anything but a means to mollify you and molly coddle you into thinking all will be well.

Anyone can make excuses for their actions, not a few are willing to come clean for the real reasons they take those actions.

Begich hasn't justified his actions, he's lulled you all to sleep.