Anne Kilkenny to be Honored by the Alaska Press Club 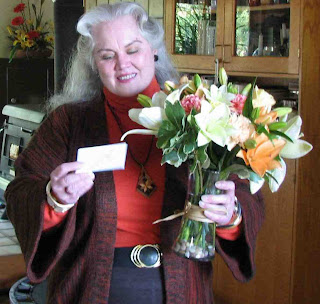 Wasilla resident Anne Kilkenny's email to friends, sent out on the first day of September last year may have garnered more attention to Sarah Palin's shortcomings as an administrator than did all the efforts of Alaska's bloggers combined. Anne didn't even know what a blogger was when she sent the email to a few close friends.

Anne's email went viral as no document sent by a return/enter button in the history of Alaska ever had before.

Many of the reporters who contacted me between the 4th and 10th of September had questions about details of Anne's letter. I didn't write much about it at Progressive Alaska, and I didn't forward any of the scores of copies of it I received in my email accounts from next door neighbors, and from people halfway around the world. I didn't have to.

Within days, Anne was the subject of many articles, including an interview on National Public Radio.

The Alaska Press Club has chosen to honor Anne with a special award at their annual Journalism Conference in Anchorage. She will be the special guest at a luncheon on Friday, March 27th, at the Anchorage Senior Center. I'll have more details about the event as they emerge.

I'm about to email my friends at Team Sarah with the good news. They'll be so excited! After all, anyone who knows this much about Sarah Palin must be a friend of Team Sarah:

During her mayoral administration most of the actual work of running this small city was turned over to an administrator. She had been pushed to hire this administrator by party power-brokers after she had gotten herself into some trouble over precipitous firings which hadgiven rise to a recall campaign.


Sarah campaigned in Wasilla as a “fiscal conservative”. During her 6 years as Mayor, she increased general government expenditures by over 33%. During those same 6 years the amount of taxes collected by the City increased by 38%. This was during a period of low inflation (1996-2002). She reduced progressive property taxes and increased a regressive sales tax which taxed even food. The tax cuts that she promoted benefited large corporate property owners way more than they benefited residents.


The huge increases in tax revenues during her mayoral administration weren’t enough to fund everything on her wish list though, borrowed money was needed, too. She inherited a city with zero debt, but left it with indebtedness of over $22 million. What did Mayor Palin encourage the voters to borrow money for? Was it the infrastructure that she said she supported? The sewage treatment plant that the city lacked? or a new library? No. $1m for a park. $15m-plus for construction of a multi-use sports complex which she rushed through to build on a piece of property that the City didn’t even have clear title to, that was still in litigation 7 yrs later--to the delight of the lawyers involved! The sports complex itself is a nice addition to the community but a huge money pit, not the profit-generator she claimed it would be. She also supported bonds for $5.5m for road projects that could have been done in 5-7 yrs without any borrowing.


While Mayor, City Hall was extensively remodeled and her office redecorated more than once. These are small numbers, but Wasilla is a very small city.

That is just a small part of Anne's detailed, but carefully crafted letter about Alaska Governor Sarah Palin.

image - provided to Bob Martinson by the Kilkennys

Posted by Philip Munger at 5:46 PM

Wow! First Katie Couric gets the Cronkite award and now Anne K. - both for enlightening the world on Palin. Sarah's head may explode!

I love Anne Kilkenny and am so appreciative for her courage to "out" Sarah Palin.

Anne is a beautiful, courageous woman. I wish I had the nerve to go public like that.

Thank you Anne! Thank you from our country getting GINO as VP!
Thank you for speaking up and not being afraid!
You deserve a medal!
And this pretty much says it all about the others who know about GINO and won't speak up:
"Fifth, I looked around and realized that everybody else was afraid to
say anything because they were somehow vulnerable."

Sorry should be thank you for NOT getting GINO as VP!

Thank You Anne your e-mail was the first I knew of SP and her fiscaly conservative ideas???

Did anyone ever stop to think maybe the sport complex was rushed through without clear title to the land so she could get a free house worth $500,000.00????

Anon@8:36 Yeah! GINO always the grifter, that one...!
Fiscal conservative with her money not the government's or taxpayers lol!
Saranomic's 101!

Excellent point, Phil, and thanks for the great news

And let us all remember that nature abhors a vacuum. Especially a vacuous vacuum. I can hear the Palin teakettle whistling away. ...

We should all pass this story about like Anne's letter to praise her heroism in exposing the realities of what Sarah Palin said she did and what actually happened. Thank you Anne, I hope the ADN steps up to the plate and acknowledges your award.

A must read on Sarah Palin!