Private Prisons - Do They Save Money? 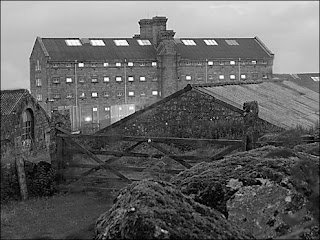 Sunday's edition of the Anchorage Daily News contains an article by Sean Cockerham that notes rising costs for the upcoming construction of a large prison near Pt. McKenzie are being used as a reason for some Alaska lawmakers to propose the prison be operated by a private company when completed. Currently, plans are for the new correctional center to be a part of the Alaska Correctional System, run by career correctional officers, who would be state employees.

The article names Fairbanks legislator Mike Kelly as being responsible for introducing new language into the House version of the FY2010 budget that opens the cell door to the likes of characters similar to Bill Weimar and Bill Allen, to rake in millions, while paying their workers minimum wage plus 15%.

Here's what Cockerham writes of the bill change:

Fairbanks Republican Rep. Mike Kelly took over the corrections budget in the state House this year and said that -- if he could -- he would slow the project down. But the bonds for construction have already been sold. That's left lawmakers with few options.

One is to privatize operations of the prison when it opens. So Kelly put language in the budget that passed the House on Friday asking the corrections department to investigate doing just that.

"The intent says, hey, take a look at what we might save in this (expensive) hill to climb and see if we have a private operator -- if that would make sense," Kelly said. 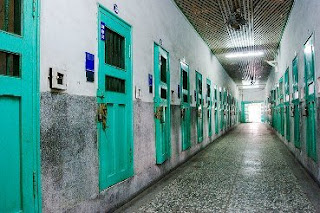 The privatization of the correctional stream around the United States, combined with the power of correctional officer interest groups in large states (like California, especially) combine to help make the United States the country with the highest raw number of convicts and ex-cons, and also the country with the highest per capita prison population in the world.

Weimar, Allen and others involved in reaping maximum profit off of petty crime isn't a new story in Alaska. And Alaska doesn't hold a candle to this recent scam in Pennsylvania:

At worst, Hillary Transue thought she might get a stern lecture when she appeared before a judge for building a spoof MySpace page mocking the assistant principal at her high school in Wilkes-Barre, Pa.

She was a stellar student who had never been in trouble, and the page stated clearly at the bottom that it was just a joke. Instead, the judge sentenced her to three months at a juvenile detention center on a charge of harassment.

She was handcuffed and taken away as her stunned parents stood by. “I felt like I had been thrown into some surreal sort of nightmare,” said Hillary, 17, who was sentenced in 2007. “All I wanted to know was how this could be fair and why the judge would do such a thing.”

The answers became a bit clearer on Thursday as the judge, Mark A. Ciavarella Jr., and a colleague, Michael T. Conahan, appeared in federal court in Scranton, Pa., to plead guilty to wire fraud and income tax fraud for taking more than $2.6 million in kickbacks to send teenagers to two privately run youth detention centers run by PA Child Care and a sister company, Western PA Child Care.

While prosecutors say that Judge Conahan, 56, secured contracts for the two centers to house juvenile offenders, Judge Ciavarella, 58, was the one who carried out the sentencing to keep the centers filled.

“In my entire career, I’ve never heard of anything remotely approaching this,” said Senior Judge Arthur E. Grim, who was appointed by the State Supreme Court this week to determine what should be done with the estimated 5,000 juveniles who have been sentenced by Judge Ciavarella since the scheme started in 2003. Many of them were first-time offenders and some remain in detention.

I worked in public safety and community (that is, privatized) corrections in Alaska for almost 13 years. I didn't witness anything as awful as this Pennsylvania story, but the privatization of many functions in Alaska's correctional stream have resulted in abuses. Not only that, Alaska politicians of both parties who support privatization of correctional programs usually receive a huge surge in political contributions from people connected with the industry.

More on this later.
Posted by Philip Munger at 11:57 AM

How stupid is this?

Correctional officers are trained professionals. They may not be on the parr of teachers educational-wise but the good ones are trained and experienced. You just don't hire anyone off the street for minimum wage plus 15% and put them in a uniform. Not even with a psych eval and passing a written test.

But not if you privatize schools and pay "teachers" minimum wage plus 15%.

You get what you pay for.

A “SINGLE VOICE PROJECT” is the official name of the petition sponsored by: The National Public Service Council To Abolish Private Prisons (NPSCTAPP)

THIS PETITION SEEKS TO ABOLISH ALL PRIVATE PRISONS IN THE UNITED STATES, (or any place subject to its jurisdiction)


The National Public Service Council To Abolish Private Prisons (NPSCTAPP) is a grass roots organization driven by a single objective. We want the United States government to reclaim sole authority for state and federal prisons on US soil.
We want the United States Congress to immediately rescind all state and federal contracts that permit private prisons “for profit” to exist in the United States, or any place subject to its jurisdiction. We understand that the problems that currently plague our government, its criminal justice system and in particular, the state & federal bureau of prisons (and most correctional and rehabilitation facilities) are massive. However, it is our solemn belief that the solutions for prison reform will remain unattainable and virtually impossible as long as private prisons for profit are permitted to operate in America.

Prior to the past month, and the fiasco of Fannie Mae, Freddie Mac, AIG, Lehman Brothers, and now the “Big Three” American Automobile manufacturers, the NPSCTAPP has always felt compelled to highlight the “moral Bottom line” when it comes to corrections and privatization. Although, we remain confounded by the reality that our government has allowed our justice system to be operated by private interests. The NPSCTAPP philosophy has always been “justice” should not be for sale at any price. It is our belief that the inherent and most fundamental responsibility of the criminal justice system should not be shirked, or “jobbed-out.” This is not the same as privatizing the post office or some trash pick up service in the community. There has to be a loss of meaning and purpose when an inmate looks at a guard’s uniform and instead of seeing an emblem that reads State Department of Corrections or Federal Bureau of Prisons, he sees one that says: “Atlas Prison Corporation.”

Let’s assume that the real danger of privatization is not some innate inhumanity on the part of its practitioners but rather the added financial incentives that reward inhumanity. The same logic that motivates companies to operate prisons more efficiently also encourages them to cut corners at the expense of workers, prisoners and the public. Every penny they do not spend on food, medical care or training for guards is a dime they can pocket. What happens when the pennies pocketed are not enough for the shareholders? Who will bailout the private prison industry when they hold the government and the American people hostage with the threat of financial failure…“bankruptcy?” What was unimaginable a month ago merits serious consideration today. State and Federal prison programs originate from government design, and therefore, need to be maintained by the government. It’s time to restore the principles and the vacated promise of our judicial system.

John F. Kennedy said, “The time to repair the roof is while the sun is shinning”. Well the sun may not be shinning but, it’s not a bad time to begin repair on a dangerous roof that is certain to fall…. because, “Incarcerating people for profit is, in a word WRONG”

There is an urgent need for the good people of this country to emerge from the shadows of cynicism, indifference, apathy and those other dark places that we migrate to when we are overwhelmed by frustration and the loss of hope.
It is our hope that you will support the NPSCTAPP with a show of solidarity by signing our petition. We intend to assemble a collection of one million signatures, which will subsequently be attached to a proposition for consideration. This proposition will be presented to both, the Speaker Of The House Of Representatives (Nancy Pelosi) and the United States Congress.


Please Help Us. We Need Your Support. Help Us Spread The Word About This Monumental And Courageous Challenge To Create Positive Change. Place The Link To The Petition On Your Website! Pass It On!

The SINGLE VOICE PETITION and the effort to abolish private “for profit” prisons is the sole intent of NPSCTAPP. Our project does not contain any additional agendas. We have no solutions or suggestions regarding prison reform. However, we are unyielding in our belief that the answers to the many problems which currently plague this nation’s criminal justice system and its penal system in particular, cannot and will not be found within or assisted by the private “for profit” prison business. The private “for profit” prison business has a stranglehold on our criminal justice system. Its vice-like grip continues to choke the possibility of justice, fairness, and responsibility from both state and federal systems.
These new slave plantations are not the answer!

THANK YOU FOR YOUR SUPPORT!