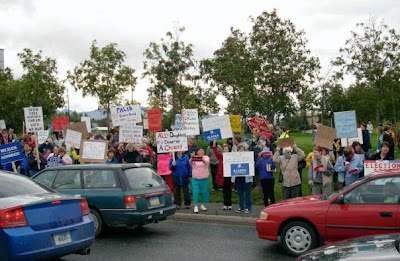 Late last summer, Alaskans rallied outside the Loussac Library in Anchorage to observe that Sarah Palin "DOESN'T SPEAK FOR ME!" It was the biggest outdoor demonstration in Alaska history.

Once again, Gov. Sarah Palin has rejected the hopes and NEEDS of Alaskans, in her self-serving rejection of almost a half billion dollars in Federal economic stimulus package funds. All this, while asking Alaskans to continue supporting her deluded scheme to ship a half billion Alaskan dollars to a somewhat dubious Canadian venture.

Greet Anchorage legislators as they convene at Loussac Library for the Anchorage Caucus.

ASD Superintendent Comeau will respond to the rejection of simulus funds inside the building (presumably other community leaders as well).

We’ll be outside to greet our elected officials and send a strong message that we want them to overturn Palin’s unconscionable choice to reject stimulus money.

Bring signs and wear warm clothes - you know the drill!

"We need COMMUNITY ORGANIZERS to come forward to confront this situation where an ideologue is sacrificing Alaskans' real needs for her ambitions!"

Let's join our Democratic Party lawmakers, union folks, school supporters and other concerned Alaskans, to show Anchorage, Alaska and the country that we reject Palin's narcissism.

Posted by Philip Munger at 1:47 PM

I'd say it's time to begin those Palin impeachment hearings! She clearly has violated her oath of office on this one.

Nice attempt at trivializing the outrage over what "candidate Palin" is doing to her constituents. Happy Meals will soon be called "sad meals" in Alaska as she tanks the educational system due to her greed for the presidency.

Poe for Governor of Alaska, Now!

YOUR ALL A BUNCH OF MORONS AS FAR AS IM CONCERNED AND IM NOT EVEN FROM ALASKA. SHE SHOULD HAVE REJECTED ALL THE MONEY ALONG WITH ALL THE OTHER STATES. AMERICA ITS TIME TO STOP BIG GOVERNMENT, NOT TAKE HANDOUTS FROM IT. NOTHING IS FREE AND IF YOU TAKE ALL THE HANDOUTS, THEY WILL TAKE YOUR RIGHTS. STOP THE SOCIALIST AGENDA OF THE OBAMANATION AND BRING AMERICA BACK TO ITS GREATNESS.

I live in Alaska, the last Good President of US was Kennedy not only did they kill him, they killed our rights and freedoms.

Wacky Wackos will hold hands and sing Kum by ya.

Speaking of "socialism", Alaska has taken more earmarks than any other state. There's no way she'll ever live that down. She can reject everything that comes down the pike now but the facts still remain: Palin the the EARMARK QUEEN! (That's one title she clearly won....heh-hem!).

Now let's look into Spenard Building Supply for that little bit of "payola" called the Palin Residence and how that will net her precisely what it got her bosom buddy Ted Stevens, shall we?

The coming "revolution" in Alaska by the citizens when they realize that they've been totally duped by their Governor will not be a pretty sight. I smell impeachment soon.

Or maybe that "greatness" would be the resumption of spying on american citizens and using the constitution as toilet paper?

Where have you been living, Mr. Greatness (above)...in some dark hole in the Tundra perhaps?

caps lock, go post that POS at the news-miner, they will love it.
well, i didn't make the protest, but i wrote my state legislators about palin's stimulus exclusions. one of them replied and said, they're working on restoring all of the rejected funding. so we'll see how far the queen bee is willing to go with her line item veto pen. the whole episode is disgusting, imo.