She Called It a Bribe 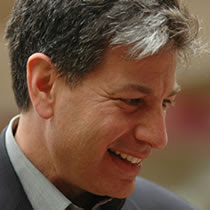 
She called it “a bribe”. That’s how Gov. Sarah Palin described the stimulus money she rejected. What does that make stimulus money she took, and all the other federal money woven into the state? What does it make the energy relief money Alaskans received last year? How does this name calling make federal leaders more likely to help Alaska in the future?

In these unusually trying circumstances, the Governor was wrong not to accept the stimulus money, and she compounded her mistake by injecting divisive inflammatory rhetoric into the discussion. Stimulus money helps safeguard Alaskan jobs and Alaskan opportunities in extremely turbulent times.

I can’t say what was in the Governor’s mind when she made this decision. I can say that it is insensitive to the plight of vulnerable Alaskans, incomprehensible given the realities of how the stimulus works, and indefensible because the facts just don’t back up her stated reasons for turning aside the money. Hard times are more than economic statistics that give policy makers indigestion. They mean individuals losing jobs, schools losing teachers, families losing health care. They mean bankruptcies, more domestic violence, more hungry people showing up at food banks.

Hard times land on real people, and real leaders should provide real answers. Governor Palin turned aside $2 million that would have gone to feed the hungry when our food banks already report serving growing numbers of people. She even rejected money that would have gone to help victims of domestic violence. She refused more than $170 million of education money –which is difficult to reconcile with her claims to value and support education. She failed to accept funds that every other governor in the country willingly received.

The economic and human truth is that adding stimulus money to Alaska’s economy means jobs and opportunity in our state. Whether those jobs are permanent may be subject to argument, but for the time that they exist, those jobs will put food on family tables, and keep roofs over family heads. The multiplier effect of those wages will keep stores solvent and communities afloat. That money will make a difference to the lives it touches. 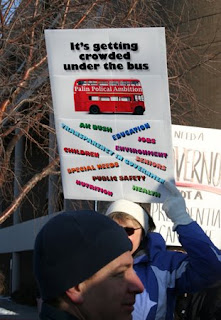 I heard the governor talk about the dangers of excessive national debt – but I didn’t hear her tell us the reality that governors across the country, Republicans and Democrats, stand ready to take Alaska’s stimulus money, and educate their kids, weatherize their homes, and protect their jobs. As Alaskans, we’re tough, but this course plays us for fools. To be clear, the money she rejects doesn’t return to the federal treasury, it doesn’t impact the national debt one cent, it just goes to another state. On top of all of that, when the governor is anxious to write a $500 million check to stimulate a Canadian gas pipeline company, it doesn’t make sense that she turns down a far smaller amount of federal money that would go to help Alaskans.

The reality of governing means that the governor and her administration have the responsibility to make informed decisions before acting. The evidence here is that the governor failed to consult with would-be beneficiaries of the stimulus, a failure of process that belies her promises of open and transparent governance. She said we couldn’t take more than $37 million of energy assistance because we needed to adopt energy efficient building codes first. Wrong. Weatherization funds and block grants are separate from any building code requirement. As for the education funds – it doesn’t make sense that zero funds to teach kids for the next two years is better than $170 million for that time frame, that special education students should forego $34 million, and that declining $50,000 of emergency school lunch money does any good.

So Governor, do the right thing. Take the stimulus. Make sure Alaskans know that you truly have our interests at heart.


images -- by Denis Zaki and AK Muckraker
Posted by Philip Munger at 11:01 AM

Jindal is taking the money.. his concern was the same as hers supposedly.. that after the two years was over the laws were changed and they have now told him they can change the laws back with no problem... so he is taking all the money is what I read over the weekend.

Maybe she will change her mind if she finds that out...

I so wish she could be impreached *sigh*

Bribe, huh? So, what did she call scratching $2M from the 2008 Special Olympics budget? Or monies from the emergency food banks?

When are we going to STOP giving Palin the "validity" and therefore the respect due NORMAL people, people who disagree with us but who, nonetheless, behave in a logical, rational way.

THIS WOMAN IS MENTALLY ILL. HOW MANY "PERPLEXING", "CONFUSING" ACTIONS DOES SHE HAVE TO TAKE BEFORE WE CALL A SPADE A SHOVEL ?

EACH of her actions are just symptoms of her mental illness i.e. extreme malignent narcissism and ranting againt her irrational behavior will not help as long as she is in power.

There is an elephant in the room that everyone is ignoring and that elephant is mental illness.

This woman will continue to damage this state and the individual citizens of this this state that her actions affect until someone in a position of authority or prominence has the courage to confront the cause of her illogical behavior instead of just ranting against the symptoms.

SHE IS MENTALL ILL !

Oh, and furthermore, how logical is it of her to lambase Obama for his gaff on the Leno show when she simultaneously rejected the education funds that in part would have gone to help Special Needs Children?

Remember at the RNC how she went on about Trigg and how mothers with special needs kids would have a chamption in her?

And then she rejects stimulous money that would help them !

This is more than hypocritical. IT shows that she is incapabale, like many other of her actions, of realizing how her need for instant, reflexive revenge hits her in the face because she does not stop to think how she will be perceived?

Typical of a narcissist, she sees NO conflict between lambasting Obama and in the same 48 hr period, rejecting money to help special needs kids.

Narcissist are literally delusional and I mean that LITERALLY !

THIS WOMAN IS MENTALL ILL AND IS NOT GOING TO GET BETTER, EVER !

She should not take the money. I think the legislature will cave in,however. They always have taken everything the feds are willing to give them, and they have swallowed all the strings attached as well. We here in Alaska have been begging at the federal gates for decades. Without federal money we couldn't run the state it seems.

It's quite a farce that the Mat-Su School District says they will have to lay off about 60 personnel if this money does not come in. Ummmm...why didn't we hear about this shortfall before the money was announced? And why was there a shortfall anyway, the district has known their budget for a long time now.

She's messing with my programs that I work with directly, and that's not cool. She is also making it difficult to convince my boss to not fire me at the end of my Americorps term, because he won't have enough work to support another player.

bribe ? My arse that is a bribe!

Give me a break.

Speaking of bribes.... Is the funds for the cook inlet bridge going thru? Let's see we got a ferry earmark, several KABATA earmarks and some more in the stimpackage. All have entered the race to hook up at the intersection over yonder...... Don Young Way and Lu Young Way

Really - what is so wrong with a taking a so called bribe if it is for a good cause?

"Strings attached", two word culture. You don't have to really explain it, just repeated it.

"If they approve the money now they will be forced, forced I tell you, to keep spending money on education after the federal money runs out! And how we gonna get Republicans elected with an educated populace?"

palin fully expects that money to be accepted by the state. and she fully expects to use both her faux-denial and that acceptance politically. she's doubling down. which makes her pretty smart.

i find her useful in similar ways. way more useful than moribund dino tony knowles or that hyperactive halcro. as governor they would've just gotten tied up in their respective knot gardens.