This One's For You, Prof. Steiner! 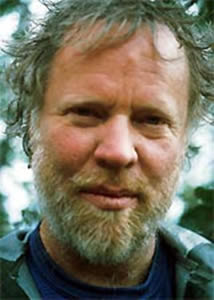 Just found out that the pain in my butt (actually - lower back and thighs) I've been experiencing since chopping wood during Super Bowl halftime isn't something like cancer or some other wasting malady. More like nerve damage. Anyway, I'm going to celebrate, by celebrating two of my heroes - Rick Steiner and Richard Dawkins.

Progressive Alaska was the first Alaska medium to seriously take up the case of University of Alaska Anchorage oceanography professor Rick Steiner, when he sought full information on correspondence between State of Alaska scientists, regarding the classification of Polar bears by the Federal government. Although several Alaska and national blogs have now taken up the probable de-funding of the Federal part of Steiner's UAA Sea Grant program duties, PA has sought to tie Steiner's treatment to his wider role in our state's college system, and in the debates on free exchange of information, and science education.

Science education has been important to me for a long time. My wife and I have fully supported school programs, from elementary school science fairs (where I've been a judge), through middle school and high school programs, such as the Science Olympiad (where both our kids were Alaska champions), and college (where one kid has graduated with a science degree, the other one working on his).

Since so-called "creationism" reared its modern head in the early 1980s, I've tried to stay well-informed on the activities of these superstitious people who hurt our national discourse, bankrupt school districts, and stunt the growth of our economy. I've tried to inform others of their activities and broader beliefs.


This is a remarkable time. So many patently false memes (a term Dawkins had a hand in initially defining) evaporating, so many faulty paradigms crashing into concrete walls, so many blistered, feverish, rabid lemmings rushing off cliffs:

Anna Fairclough would fit right in with that Oklahoma legistator.

Alaskan Dave Down Under said...

After following the links in your post and reading about the religious whackos in the USA, I'm glad I'm able to watch the freakshow from Outside of the USA. I tried Sunday School (on my own initiative) when I was 8 (late sixties). Ummmmmm, after a few weeks of listening to Hebrew fairy tales told as absolute truth, I was outta there.

Phil, I think you are doing a great service with your blog. Keep it up mate.

Mr. Steiner would be more effective and better respected if he let up on the grandstanding behavior and actually tried to do some work. The little PR stunt at the North Aleutian Basin workshop is a perfect example of an overfed ego. I presume he was on leave for those histronics.

anon @ #3 - I've read as much material on the North Aleutian Basin workshop as is publicly available. I'm afraid I missed what it is you mean by "let up on the grandstanding behavior and actually tried to do some work."

Could you be more specific, please?

Rick's claims of bias or overt advocacy were nothing but spin and he demonstrated some rather unprofessional behavior himself with the press conference at the Starbucks. So what if Shell kicked in $ for a meeting room at the Marriott. Sea Grant spent months to coordinate a well organized meeting with the stated intent of continuing outreach on the topic in the future. Rick's aim was to torpedo any result of the workshop. If I were his employer, I'd dock his pay too. And to wrap himself in the flag of academic freedom afterward is akin to seeking that last refuge of a scoundrel, patriotism. Rick can be an effective advocate for his viewpoints; Sea Grant should not feel compelled to pay him for that mavericky privilege. I'm opposed to drilling in the NAB, but I also am well aware that fishing boats spill now and again, and again, and again. Many pointing pots and black kettles in this little corner of the world. The forum was questioning if oil/gas industry and fishing can co-exist. Because the question was not "Should they have to co-exist?" Rick claims bias and paid-for advocacy. Both questions need to be addressed. I believe Sea Grant tried to address the topics in the proper sequence.