Another Joe for Juneau 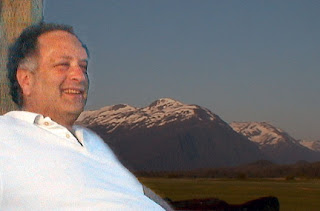 Here is a remembrance of Joe:]

Another Joe for Juneau

Early in the summer of 1971, the Juneau blues/rock band that I had played in broke up as key members moved away from Alaska. I was trying to find enough blues players to form my dream blues/R&B band --- a band with a horn section, and with my blues harp as the lead instrument.

One day in early June, I spotted a new face on the street, a guy with a big smile and and oversized Afro hair. I asked him if he played trombone or sax, and he replied “No, but do you know a place where I can plug in my camper van?”. The bearded, bozo-headed humorist was Joe Sonneman, who had just arrived in Juneau to do research for his doctoral dissertation at Claremont Graduate School. An economics major who retained his Keynesian roots through his undergrad days at Milton Friedman’s University of Chicago lessez-faire department, he was analyzing the effects of oil income on Alaska’s public finances.

I referred Joe to some hippy friends at the end of Mendenhall Peninsula who had electricity at their parking pad, and invited him over for dinner. He eventually met most of the other members of Juneau’s alternative and activist community over the next few months. When he discovered that we wouldn’t be having a marching band for the Fourth of July parade, he and Cynthia Streeter organized a 30 member kazoo band to play Souza favorites, with Cynthia as drum majorette and Joe conducting in his clown suit.

By the end of the summer, Joe knew that he had found his home in Alaska, and returned to Claremont only when he needed to. In the spring of 1972, he had changed his voting registration to Juneau, and was one of the Ad Hoc Democrats that unseated party regulars when we packed the Juneau, Anchorage, Fairbanks, Sitka, Kenai, and Mat-Su caucuses, district conventions,and the State Convention. One of my favorite memories of that convention, held at the UAF Wood Center, is Joe in his clown suit, attempting to hand Mike Gravel an anti-Vietnam War petition, and Gravel trying to avoid recognizing or looking at him (this was a year before Gravel’s grandstanding with Daniel Ellsberg’s Pentagon Papers).

When the opportunities of pipeline wages came along, Joe took oiler training and joined Operating Engineers Local 302. He worked the summers of 1974 and 1975 oiling equipment at the camps and pump stations from Delta south to Thompson Pass, and documenting construction of the line with his 8 x 10 inch view camera, in the same manner that Gold Rush photographer A. E. Hegg documented the Klondike Gold Rush.

Joe returned to Juneau and bought a tiny white house with green trim on Willoughby Avenue, in a commercial zone next to what was then Laura Lee’s Bar-B-Q, and what is now Bullwinkles Pizza. Over the next 30 years, it was his photo studio, law office, boarding house, where the door was always welcome to his many friends.

Joe was active in politics from his early days in Juneau. He often ran for office when no one else would oppose an entrenched but widely disliked candidate, starting with Juneau’s Mayor William Macomber in 1973, when he used photo self-portrait posed like pictures of Juneau founding father Richard Harris with the slogan “Another Joe For Juneau”. He continued by running in Democratic primaries, for the house in 1974, and for the U.S. Senate in 1978, 1992, and 1996, finally winning the nomination in 1998, when he was defeated by the entrenched Frank Murkowski. The only time he lost and felt bad about it was when he lost to Teresa Obermeyer in 1996.

As a postal workers’ union steward, he became interested in labor law, and took some paralegal courses at UAS that convinced him to attend law school. He told me that his three years at Georgetown were a great exercise in sleep deprivation, but he reveled in attending a school where Sam Dash taught ethics and students could easily attend Supreme Court oral arguments. He easily passed the Massachusetts, D.C, Alaska, and Hawaii bar exams.

He was obstinate, and a man of such conviction that he sometimes alienated his strongest allies at Democratic Party conventions and meetings. He served the Party on precinct and district committees, and served several years as State Treasurer.

In 2006, he was having trouble with what he said was weakness in his arms. After numerous visits to the Anchorage VA clinic and the Seattle VA hospital, he was diagnosed with ALS, amyotrophic lateral sclerosis, also known as Lou Gehrig’s disease, which slowly attacks the motor nerves and results in gradual paralysis.

Years before, Joe had been a strong advocate for an Alaska Veterans Home, similar to the one he had visited in Washington State, but when the Alaska Legislature created a Veterans Wing at the Palmer Pioneers home, they left the age of admission at 65. When Joe was diagnosed, he was 62, he had to move to Washington and become a Washington resident to get admitted to the Washington Veterans Home at Retsil, where he lived for 2 years because there was no place in Alaska where veterans under 65 could obtain assisted living care.

He was a loyal Chicago Democrat to the end. I visited him last November, and when he told me he would be buried in the Sitka National Cemetery, he said he had considered burial in Chicago so he could keep voting Democratic.

He has inspired me to continue his work in several ways, including advocating construction of a real Alaska Veterans Home, open to disabled military veterans of any age, and advocating more funding for research for a cure for ALS, a disease that occurs 40% more often in our military veterans than in the general population.

But what I will miss most is the smile, the unasked-for (and sometimes unwanted) advice, and the incredible sense of humor.

Another Joe for Juneau, gone too soon.

Posted by Philip Munger at 8:18 PM

I wish I had known this man. He sounds like a gem.

Thanks, Dennis for publishing this very nice remembrance. I knew Joe, but not as well as you did. We will miss him.

I understand that there will be a memorial eulogy for Joe at the Jefferson-Jackson day dinner in Juneau on April 7. There may be others planned, but I am not aware of them at this point.

Another Juneau icon gone, thanks for all your hard work Joe.

Wasn't Joe Sonneman behind putting a grand piano on top of Mt. Roberts too?

Sorry to hear of Joe's passing. Though I only lived in Juneau a short time, and didn't know him all that well, I remember he was approachable, friendly, a little zany, and never let his advanced degrees get in the way of being a down-to-earth soul. He was a character, in the best sense of the word. Bye, Joe, you'll be missed.

Joe was what Alaska needs, a bright person, willing to question authority, and always trying to make people's life better. We will miss Joe because he was always willing to point out the unpopular, push a lost cause because it was the right to do, and focus us to confront the parts of ourselves we weren't always interested in seeing. He made us face the tough questions about our beliefs and really question our basic beliefs. We'll really miss him. Roland Shanks

Thanks Dennis. I had to send this to my mom. She was sorry to hear Joe had died.

Dennis...It was a pleasure meeting you in Juneau over the July 4th Holiday. Your kindess will be ever embedded in my family memories of the region.