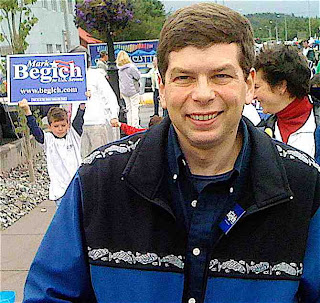 This just in from Julie Hasquet, Sen. Begich's Press Secretary:

Sen. Begich will be on the Rachel Maddow show tonight at 5:30 Alaska time talking about the Moderate Democrats group he is a part of that was announced yesterday.

I'm teaching this afternoon - on break between classes right now - so I'll have to rely on MSNBC's clip service.

Rachel Maddow's initial take on this, along with Howie Klein's essay about the ConservaDems, is directly below, in the previous post.
Posted by Philip Munger at 5:02 PM

Saw the interview - he sounded reasonable, so hopefully he will be and the others too. At least he said they weren't just planning to be another group saying just "no" to everything

I thought he was good also. It didn't seem like he was planning to be the (little party of) No!
I hope it works out, PO doesn't need anymore opposition from RepoTalibani!
He is trying to move the country forward, while they want to country to fail....Bastards!

don't worry, Mark is still a liberal and he has only joined this group for show.

He is trying to make Dan Fagan say "good boy"

The desire to ignore perfectly clear signs of reality is strongest in those who are most often and repeatedly fooled.

Saw the interview. Begich is very impressive and knowledgeable. Besides he also can articulate his thoughts intelligently (unlike the Governor).

Begich would make a much better presidential candidate by a long shot than Pathetic Palin.

So Begich mouths a few platitudes and all the fools fall all over themselves to praise his speechifying skills.

He didn't explain his actions that are in direct contradiction to all his pretty words.

Are you all so easily pawned?