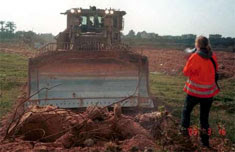 Yet, much has changed in those six years.

The September 2003 issue of Mother Jones Magazine carried an article about Rachel Corrie. It was written by Joshua Hammer, at that time, Newsweek Magazine’s Jerusalem correspondent. The article, titled The Death of Rachel Corrie, contained a header which read:

Martyr, idiot, dedicated, deluded. Why did this American college student crushed by an Israeli bulldozer put her life on the line? And did it matter?

The article tediously explained why it did not matter, concluding:

Corrie herself has faded into obscurity, a subject of debate in internet chat rooms and practically nowhere else.

Hammer’s article and its not-so-subtly veiled Zionist premises, were refuted at Counterpunch by Phan Nguyen. His article, Specious Journalism in Defense of Killers, totally debunked Hammer’s hit-job, showing how Hammer had plagiarized the work of bloggers with whom he had corresponded.

At the time, I wrote to one of the wingnut bloggers whose work Hammer had seemingly passed off as his own. His reply was, “Ripped off is one thing. Being ripped off and put into MoJo, that’s another!”

Phan Nguyen concluded his dissection of Hammer with this:

Her letters from Rafah have now been published in mainstream English-language media such as Harper's and The Guardian. They have been translated into numerous other languages and have been reprinted in publications throughout the world. In the Arab world, her name continues to resonate as a reminder that not all Americans support the policies of their president. Documentaries have been made about her in the US, Japan, the Middle East, and elsewhere. Around the world, including in Israel, songs and poems have been written about her. Participation in ISM has risen as a reaction to her killing. Memorials, scholarship funds, and humanitarian centers are being established in her name and in her honor. ISM has even been nominated for a Nobel Peace Prize, with special recognition of Corrie, Brian Avery, and Tom Hurndall. Arab parents are naming their children after her. Veterans for Peace has awarded her with a posthumous membership. Susan Sontag recognized her as she presented the Rothko Chapel Oscar Romero Award to Ishai Menuchin of Yesh Gvul, and Israeli conscientious objectors have evoked her name when they explain their refusal to serve in the Occupied Territories. 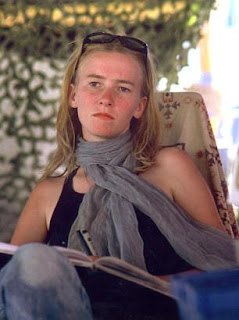 Here we are, six years after Rachel Corrie’s death, five and a half after Hammer’s careless article. One could say that Corrie is easily better known now than Hammer ever was or will be. But that isn’t saying much.

After Hammer’s article, Alan Rickman and Katherine Viner wrote My Name is Rachel Corrie, a play, based on Corrie’s youthful journals, and her letters and emails from Gaza. After two successful 2005 runs in London, where the play won awards, it was “postponed indefinitely” by the prestigious New York Theater Workshop, because it was deemed too controversial. That cancellation became much more covered by the media than had been Corrie’s death.

The play has since gone on to several performances around the world, including in Tel Aviv and Jerusalem. Other art about Corrie has sometimes received troubled history too, but several artistic tributes have not created any controversy.

Less obvious has been the effect of increasing public criticism of virtually blind support of Israeli policies by American elected and appointed officials. This public scrutiny has been most obvious in the publication of Jimmy Carter’s 2006 book, Palestine Peace Not Apartheid, and in the fierce debate surrounding the recognition of the importance of Walt & Mearsheimer’s 2007 full-length version of The Israel Lobby and U.S. Foreign Policy.

Many of us have watched as Carter, Walt and Mearsheimer battled back against criticism, ostracism and outright lies. After almost three years of assaults and insults, Carter is as fearless in his continuing efforts on behalf of Palestinian dignity and rights as he is on behalf of any other embattled people, culture or idea.

But it has been a constant struggle for people who are so-called "realists." Two examples that immediately come to mind are Helen Thomas and Charles Freeman.

MJ Rosenberg, the Director of Policy for the Israel Policy Forum, relates Helen Thomas' case, when she got to ask her first question to her ninth American president:

Ms. Thomas' moment came when she asked the president about nuclear proliferation. Her question ended with the query: does he know of any Middle Eastern state with nukes?

Why did she ask that? She asked it to see if Obama would refuse to respond as previous presidents have. The answer is Israel, of course. And everyone knows it.

Why is the American president forbidden from being honest on such a critical subject. Answer: there is no reason, unless we are to believe that Israeli policy guidelines, by definition, apply here as well.

So why did Obama refuse to answer? Simple. Because if he did, the media would have reported it as a gaffe. Reporters either know nothing about the Middle East or, for the most part, have adopted Israel's perspective.

Had Obama spoken the truth, the media would have made his "blunder" the story of the night.
He cannot afford that because, frankly, we have more important things to worry about, like rescuing the economy.

So I don't fault Obama. But I salute Helen Thomas. Next time she should ask how he felt about those pictures that came out of Gaza.

That Thomas will be allowed to return to her front-row seat to once again ask Obama whatever she wishes, even though she has offended militant Zionists is progress. She will be dissed by Israel-firsters, but they can't stop her.

Just last week a prominent American foreign policy "realist," Charles Freeman, withdrew his name from consideration for the important post of chairman of the National Intelligence Council. That the Wall Street Journal allowed his letter of protest to be prominently printed, is a sign of progress. Here are highlights:

I have concluded that the barrage of libelous distortions of my record would not cease upon my entry into office. The effort to smear me and to destroy my credibility would instead continue. I do not believe the National Intelligence Council could function effectively while its chair was under constant attack by unscrupulous people with a passionate attachment to the views of a political faction in a foreign country.

The libels on me and their easily traceable email trails show conclusively that there is a powerful lobby determined to prevent any view other than its own from being aired, still less to factor in American understanding of trends and events in the Middle East. The tactics of the Israel Lobby plumb the depths of dishonor and indecency and include character assassination, selective misquotation, the willful distortion of the record, the fabrication of falsehoods, and an utter disregard for the truth. The aim of this Lobby is control of the policy process through the exercise of a veto over the appointment of people who dispute the wisdom of its views, the substitution of political correctness for analysis, and the exclusion of any and all options for decision by Americans and our government other than those that it favors.

There is a special irony in having been accused of improper regard for the opinions of foreign governments and societies by a group so clearly intent on enforcing adherence to the policies of a foreign government – in this case, the government of Israel. I believe that the inability of the American public to discuss, or the government to consider, any option for US policies in the Middle East opposed by the ruling faction in Israeli politics has allowed that faction to adopt and sustain policies that ultimately threaten the existence of the state of Israel. It is not permitted for anyone in the United States to say so. This is not just a tragedy for Israelis and their neighbors in the Middle East; it is doing widening damage to the national security of the United States. [emphases added by this diarist]

Six years ago today, when Rachel Corrie was killed, defending the dispossessed, she believed that ultimately, if she stood for the truth, it would prevail. Although Freeman got bulldozed by the lobby, it is being widely perceived as a Pyrrhic victory. Even though the stories of Charles Freeman and Tristan Anderson aren't being covered widely by the mainstream press, those press organs matter far, far less now than they did six years ago. The fact that you are able to read this here and at other sites beside Oxdown Gazette, is proof that their courage and Corrie's is justified.

To honor Rachel Corrie today, here is a poem I distilled in 2003 from her diaries:

Feel sick to my stomach a lot
from being doted on all the time,
very sweetly,
by people who are facing doom.

This happens every day.

I think that I should at least mention that
I am also discovering a degree of strength
and of basic ability for humans to remain human
in the direst of circumstances.

I think the word is dignity.

I wish you could meet these people.

Maybe, hopefully, someday
you will.

I watched Amy Goodman / Democracy Now this morning and she had Rachel's parents on. She also had Tristan's partner on, who is currently at the hospital in Tel Aviv, where Tristan is. What happened to both of these young Americans is terribly sad, terribly wrong. Thank-you Progressive Alaska, Democracy Now, and other brave bloggers for bringing these stories "up front".