Why is Palin Pushing for Another Road to Nowhere? 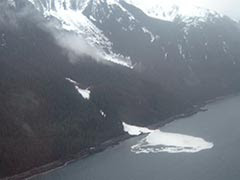 Is Governor Palin running for President in 2012 or isn’t she? The deeper I look, the more confused I become. For instance, Gov. Palin just issued a motion to reconsider a conservative Alaska District Court judge's decision to stop the monstrous Juneau Road project until the state studies the "first, obvious alternative"-- improved ferry service.

The judge's ruling seemed obvious to people in Southeast Alaska who far favor improved ferries instead of the Juneau Road to Nowhere (remember the proposed road would end at the remote wilderness Katzehin Delta because Skagway voted not to let it go through the Klondike Gold Rush National Historical Park to Skagway). Instead, the Palin administration seems intent on building the road without even considering improving the ferry system.

The virtues of the road aren’t nearly worth the obvious political risk of spending more state resources on another Bridge to Nowhere scale black hole. The project doesn’t even pass the red face test. It would cost a fortune, doesn’t even reach its destination and would be closed one of every five days in winter due to avalanche danger. That’s just from a quick glance at the EIS document Alaska DOT is using to justify the project—the same Murkowski-era document the judge said was fundamentally flawed because every action alternative included build the road.

So, as I ponder this action amid the vacuum of decisive action on other more pressing issues like reeling in the gasline wars or appointing a new state senator, my questions are these:

It just doesn't make sense after the beating she took for (even temporarily) supporting the Ketchikan bridge. And asking taxpayers to front that kind of cash in the midst of the economic, er, downturn, surely isn’t the best way to keep the love with the fiscal conservative crowd.

• Does Palin really need more confusion about where she stands on Alaskan Mega-Projects to Nowhere?

The fact that she is questioning this lawsuit and spending more state money advocating for this boondoggle means she must really support it now, like she did during the 06 campaign, but unlike last year when she told DOT Commissioner Leo von Scheben that "the project is not a priority for this administration." With a court decision as clear as this one, the ball is clearly in her court, and she’s asking for a do-over.

• Does Palin not trust the Alaska judge, and does this mean she wants to appeal his unambiguous decision to the much-maligned 9th Circuit?

That would be ironic, Palin using the "activist" 9th Circuit Court of Appeals to push another Alaska mega-project to nowhere over the objections of local residents. Especially when all the court requires is that the state consider an easier, more expeditious, more popular alternative that would likely cost less too.
Alaska District Courts are not known for siding with environmental plaintiffs, yet this decision basically told the state it was absurd not to consider improving the existing ferry system as an option for improving travel in Lynn Canal. So absurd, the court wasn't even going to address the rest of the list of problems with the project until the state looked at what it called “the first obvious alternative.”

• Does she mean to send these signals of support, or can she just not control her Department of Transportation and Department of Law?

She had to know they did this, right? Or maybe not? Or does she trust that no one is watching? Or is it a stalling tactic not to have to make even such a commonsense decision as killing this project? After all, she did say she wasn’t going to act on it until the litigation was resolved, so prolonging it with silly legal maneuvers works for this like Vogue photo shoots and awkward lower 48 invitations work for everything else.

• If she is still ambivalent and not pushing for it, why is she not more opposed to this project that almost 80% of Alaskans said they didn't want?

The project is another of fallen angel Frank Murkowski’s smashmouth megaprojects the public doesn’t want and Alaska can’t afford. That alone should make it a no brainer. Add to that the 12 year construction time, environmental damage, dangers to travelers, public outrage over Alaskan roads and bridges to nowhere, an “obvious alternative” and a long list of better things to spend almost a half a billion dollars on, and most politicians would jump at the chance to save the public from this caricature of government waste. Murkowski left it on a silver platter. Just kill the project and take the prize.

• Why is the state so averse to considering ferries as a reasonable means of transportation in an archipelago of islands like SE Alaska?

The court simply said DOT had to consider improved ferry service as an alternative. Is that so unclear or ridiculous that the state has to spend more time and money asking the court to not make them study what local residents have been saying is the solution for years?

• Does the state want to improve transportation or do they just want to build roads?

With the virtues of mass transit becoming evident even in our automocentric land, shouldn’t any analysis at least consider transit options? Maybe this is just the practice run for the so quickly nicknamed “Road to Nomewhere?”


So what’s in this move for Sarah? I still have no idea.

Will the idiocy ever cease? Thank you for showing all the ways that Sarah Palin makes absolutely no sense. She should read your blog.

Looks like you got a bit of spam there...

The ferry system is currently working on designing and building "Alaska Class" ferries to replace two of the ferries that run in Southeast. They just had a poll on the AMHS website to ask for local input. Is Mrs. Palin so out of touch with what is actually going on in her state?

I wonder if this is like her tossing out the stimulus money so the legislature could 'just say yes' ...but what sort of vote could be had by building a road out of Juneau unless she's after the same mining money as Murkowski?

get your facts straight. juneaua had an advisory vote on road versus ferries several years ago and it was split down the middle.

I believe it was actually the US Park Service that said that the road couldn't go through the Klondike gold Rush National Historical Park, NOT the residents of Skagway.