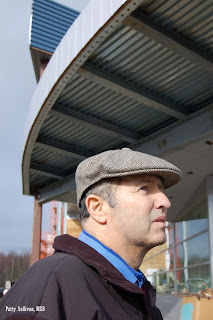 From the Anchorage Daily News story by S. J. Komarnitsky

Menard was elected mayor in 2006 and had previously served as state senator and representative for the Valley. Borough spokeswoman Patty Sullivan said that even though he'd been sick, his death came as a shock. He'd been coming into the office and working as late as last week.

Menard was diagnosed in 2003 with multiple myeloma, a relatively rare cancer formed by malignant plasma cells in the blood.

He underwent treatment for a year, and the cancer was in remission for about two years. But in 2007, he announced that tests discovered the cancer has returned with a tumor in his neck.

Menard took a medical leave but was working again when he died.

In addition to serving as a legislator, Menard was a former pilot and for years worked as a dentist in the Valley. He lost his right arm in 1975 to an electrical shock while he was attempting to mark power lines on a small hay field he used as a landing strip.
Afterward he trained himself to use his left hand and his prosthetic hook on his right arm and continued as a dentist until recently.

Curt was my first dentist, when we moved to the Mat-Su Valley from Prince William Sound, in 1983. His late son, Curt Menard II, was our kids' orthodontist. I loved to argue with Curt when he was in the Alaska Legislature. He was a fairly conservative Democrat, and a good listener.

Posted by Philip Munger at 9:18 AM

I saw this and wondered when someone would comment...Very sad, he looks very young...Lost a Son, lost a arm...Very Sad, much condolences to his Family and Friends.

Phil - Do you know if the rumors that the Heaths and Palins were upset about Linda's vote to hold Todd in contempt true?

Conservative4palin are saying he was GINO's mentor and her father is going to speak at his funeral service this Sat?
Do you know if that is true? I can't beleive if he was a honest person he would be HER mentor?

Posted from my iPhone

I read on one of the Alaska blogs that the Heaths weren't happy about Linda's vote. I don't know if it's true or not.

Have a nice evening.

What a great guy Curt was. I would have expected Sarah to speak at his service - just like she did at Curtis' in '01 when she was mayor. For those of you outside this area - both the Heath and Menard families came here to Wasilla and established roots back in the early 1970's when there were only a few hundred people in the core area and EVERYONE really did know everyone else. It's small town America in its very DNA. I think once Curtis died in '01, Sarah kind of took the place for Curt of the ambitious child who wanted to suceed in the political arena (that had been one of Curtis' many passions). So were they old, old friends? Oh, yes. Mentor? Hmmm... I'll say this - Curt Menard was an honorable and honest man. Period. And he certainly wasn't cocky or catty. He'll be sorely missed.

(fyi - Curtis was Curt's 36 yr. old orthodontist son and father of four who perished in a tragic small plane accident in August of '01. Curtis and Sarah went to school together and graduated from Wasilla High in '82)

a lot of senseless tragedy for one family. admirable qualities, too.