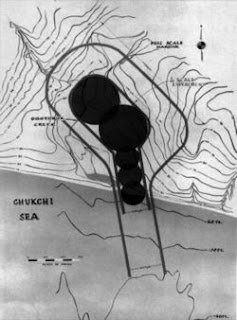 (Late summer, 2008: Greenpeace spy Alaska Rep. Les Gara (D - Anchorage) is sneaking up an alley in downtown Anchorage. He's suspected of having a thumbdrive holding gigabytes of info on a secret leftwing blogger environmentalist plot to turn the world over the the UN -- and George Soros. The drive includes details of a plan to hide a new secret UN training facility in northwest Alaska.

Special agents Meg Stapleton and Ed O'Callaghan reach out from behind a crate full of American flags, and brusquely force Gara to the pavement.

As Gara struggles, O'Callaghan quietly shrieks at him, "Gimme that gizmo, Gara. Gimme!"

Then, Meg grabs an ear painfully, moves away. As she turns in terror from Gara and O'Callaghan, she implores,

Seconds later, Stapleton grabs O'Callaghan, and they race off.

Gara shakes his head, laughing, "These guys are wackier than I thought."

This latest complaint was systematically spread beforehand on leftist blogs, who even gave "head ups" on this. This isn't the work of some loners, but a DNC operation.

It would be great to connect this to Axelrod but he is very skilled. Has had years experience covering his tracks.

I'd say his tracks are pretty covered on this. The complaints are always filed by obscure bloggers and low level Alaska rats. We need to see this through and connect the dots.

This is a too well orchestrated (and financed) campaign, not to be from high up the democrat party. Just look at Kim Elton... the anklebiter of the "troopergate" circus. He got promoted by Obama for his political hatchet job.

Team Obama's smell is all over this.

Also I wouldn't give Axelrod too much credit for his "intelligence". Just read his latest idiotic remarks: Axelrod: Anti-Americanism now 'not cool'

Team Obama is trembling before Palin and desperately try to stop her by a merciless saturation bombing. 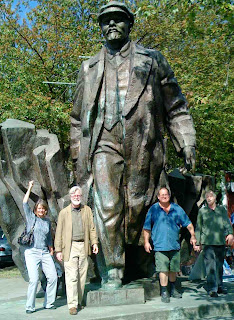 
(Spring 2009): Emerging from a programming indoctrination inside of a Lenin statue in Seattle, are two Alaska minions of Obama Chief-of-staff Rahm Emanuel. They're accompanied by their George Soros-employed control officers.

They're on their way back to Alaska, to systematically spread the Al Gore socialist message. They've been trained how to text, twitter, post YouTubes, and infiltrate patriotic events. The person taking the picture is known as agent TEH.

But, unknown to these agents, Al Gore has had implants put into them, so that if they disobey ---- uh, oh...

If you continue to divulge inside information, you will be dealt with swiftly!

Phil, best yuk I've had all day -- and there have been quite a few. (Lynnrockets has been going gangbusters with new lyrics over at Mudflats too.)

Thanks to you and CD, and all those tinfoil types out there. Be safe!

I was kind of down in the dumps yesterday about the never ending Palin show (ugh, like that pathetic excuse for writing that showed up on the Standard yesterday, the one that seemed like the guy was so busy licking Sarah's porn boots that he forgot to include any semblance of facts and writing ability). But then I stopped by Diva's place and got a big belly laugh. One question though. I heard that the Obama/Axelrod/Chicago Machine was paying us "operatives" $8-10 per hour, and I want to know where to collect my pay. Do you upper level "operatives" get more per hour than us plain ordinary minion "operatives"? Just asking.

BTW, I was talking about the Alaska Standard article (PoliGazette) called "Palin popular with conservative base but has high negatives."

Here's one that just had me howling. Sheesh, shanking in my shoes.

Mr Gara...you are a rare person these days. A democrat with common sense. We sure need more like you out there. It's time for principled leadership across America. As you say, if you oppose something, oppose it. But if there is a common ground, or a common cause, get behind it.

As you know, there was a concerted effort by the Barack Obama to harm Governor Palin during the election. Mr Obama's campaign is the one who initiated the "troopergate" craziness.

And of course, Senator Elton benefited from the pay-for-play deal.

It's no secret that a good number of Americans are begging Governor Palin to run in 2012. The number of draft Sarah movements are staggering, especially this early on.

And Mr Gara, I submit that Mr Obama is still pulling a lot of strings to hurt Governor Palin, as she is seen as the one that can defeat him in 2012. She is seen as the future of the Republican party.

We know that there is a concerted effort with paid bloggers to come in and start problems for the Governor. The Anchorage Daily News has become home to many leftist bloggers and even nationally known newspaper columnists who come in and pretend to be Alaskans.

That shows you just how afraid they are of the Governor.

You are spot on when you say that the "them" and "us" kind of politics, while entertaining, is fruitless and annoying. Alaska is a big, and important state, with a lot going on. This useless infighting will do nothing but harm the people.
-------
These people really scare the bejesus outta me!!!

I suppose if you thump hot212 (his/her area code?) on the noggin, his/her head rings like a bell.

Now I have a fantasy!

Fantasizing lining up all these whackos and playing their evidently hollow numbskulls like a xylophone...

Anon 6:04,
Any actual evidence to back your accusations? MacCarthistic tactics have long been identified and discredited.

Put away your magic 8 ball and seek counseling.

anon @ 6:04 appears to be quoting somebody from a comment or article published at the AK Standard, not writing that here as a comment.....

anon@6:04, I can't find that Les Gara thing at the Dispatch. Are you sure it was the Dispatch?
I'm busting up though that the freeper conspiracy thing has actually roped in some extremely brain dead people. I have a really hard time wrapping my liberal brain around this grand Democratic Conspiracy that is supposed to be focused on Alaska and Palin. I just can't stop snickering about it. Paid outsiders pretending to be Alaskans? heheheheheheheeeee! Paid bloggers? heheheeheheeheheeee! Operatives? heheeheheeheheeheheee!

Do'h! I just saw Phil's comment that it was the Alaska Standard not the Dispatch.

Happy Saturday everyone from beautiful sunny Phoenix.
I've been thinking about all the negative blogger comments that are popping up on the Palin-bot sites, and the implication that the bloggers are trying to ruin SP.
ALL of the blogs that I comment on are extremely careful to "source" their material. No one needs to make up stuff about SparklePlenty for heaven's sake. She's left speeches, audio, and video comments everywhere.
Where the Palin-bots make their serious assumption, as does their I-came-in-3rd-in-a-beauty-contest EX-beauty has-been, is this.
The actual blogging and bloggers write blogs based upon news stories, articles, etc. that many people don't usually find out about - thus bringing it to the attention of more people. It is all SOURCED so people can go and look at the material to see where it came from.

Obama doesn't know or care about SP - he certainly has nothing to fear from her and if she is truly the head of the Republic Party, she is a gift to the Dems and the Indies. She and people like her will absolutely RUIN what is left of their party. She is UN-electable.

You cannot win any national election without crossovers from both the Dems and the Indies.

She is absolutely abhorrent to anyone who is not in her base and she can't win with just the base.

So rather than pin it all on the bloggers who simply post stories with sourcing - why don't these tinfoil hat types go after their BIG problem.

GINO has a BIG MOUTH and she shoots it off and gives us everything we need to know. As bloggers and those who comment, we don't need to make it up.

The Wack job that is SP gives everyone all they need to bring her utter stupidity and lack of knowledge and intellect out in front. This country will not tolerate a moron as president.

We had 8 years of it and we are through with being run by people like her.

But to even imply that Obama is even aware of her defies reason. She is so stupid, she's killed herself off from any political path.