The Battle Against WAR - Last-Minute Glimpses 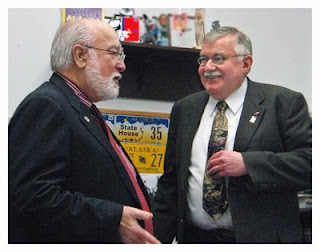 The comparison between ex-legislator Andrew Halcro's confirmation day essay on WAR and the Anchorage Daily News' craven capitulation to a Ross confirmation that assuredly is NOT a done deal, is an example why the ongoing slow death of the ADN is not the fault of the writers there, but of the editorial and management crew.

(4/16/09) The confirmation vote for Governor Sarah Palin's nominee for Attorney General is scheduled today during a joint session between the Alaska State Senate and State House.

Wayne Anthony Ross should be rejected.

If it wasn't enough that he lacks the temperament and the clarity to execute the job, judging from his comments yesterday regarding his interpretation of state statutes regarding filling legislative vacancies, Ross obviously fails to grasp the law.

If Ross is approved because Republicans fail to muster the spine to demand better, I see a lot of I told you so's in the future.

My friend and fellow Republican Jay Ramras predicts that if approved, Alaska will be in for a "colorful, bumpy ride."

Hasn't the ride been colorful and bumpy enough without adding Wilfred Brimley along with his 13th century values to the mix?

And here's the ADN capitulation:

As Ross says, the attorney general does represent all Alaskans.

Ideally, Alaska's attorney general would be someone who embodies the best values of society, who respects the inherent worth and dignity of every law-abiding citizen.

Instead, Alaska is about to get an attorney general named Wayne Anthony Ross.

I responded to this bullshit, by commenting to the editorial:

"Instead, Alaska is about to get an attorney general named Wayne Anthony Ross....."

What a tepid editorial.

While Alaska civil rights activists and bloggers went out and did some solid, sturdy research on Ross's past, the ADN has settled on giving Sean Cockerham virtually no research assistance on this richly unqualified nominee.

Just one of many examples of the bloggers' response to the irresponsible WAR nomination is Mel Green's poignant and studied letter on Ross, written to Alaska legislators. It can be found posted several places on the internet today, including at my place, Progressive Alaska.

Posted by Philip Munger at 7:26 AM

Good that the bloggers are up and at HIM this morning.
We ALL must email,call our Reps!!

Phil, thanks for blogging. I enjoy reading what you have to say.

Phil, with all due respect, the words "Our view: Hurtful bigotry", is hardly tepid.

Bless you all, you progressive bloggers have won one for everyone, Alaskan or 'lower 48' or even Hawaii!

Apparently speaking out to one's legislature does work. We will remember.

you're right about the headline. I was writing about the editorial itself. Besides - their conclusion was wrong, mine was not.