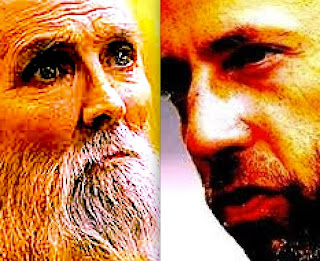 Even Papa Pilgrim would get 22% from Joe's base:

A pretty stunning new poll of Alaska's Senate race shows Joe Miller, the Republican candidate and clear favorite since his primary win, suddenly dropping to third place. And third place is a bad place to be, days before an election.

The poll shows Sen. Lisa Murkowski, whom Miller vanquished in his August primary with the help of Sarah Palin and the Tea Party, presumably taking the lead as "write-in candidates" — effectively meaning her — got 34% of support. Democrat Scott McAdams is in second with 29%, and old has-been Joe Miller is now at 23%.

Update: Ivan Moore joins me in predicting a third-place finish for Joe the Plummeter:

After the reassignment of the 5 percent who can’t be bothered to vote a write-in, the vote changes to Lisa 35.6 percent; Joe 33.5 percent; Scott 30.9 percent. Then after a 10 percent chunk falls off Lisa through invalid write-in ballots (the equivalent of the invalidation of about 9,000 votes), the final result becomes Joe 34.7 percent; Lisa 33.3 percent; Scott 32.0 percent.

The crazy thing is this. If the nonpartisans, instead of breaking 50–30–20 to Lisa–Scott–Joe, instead go 50–35–15, then Scott wins. If Lisa, instead of getting 50 percent, gets 52 percent of the nonpartisan vote, she wins. It really is poised on a knife-edge.

So this is what we do. We need to engineer a little unity in the No-Joe vote. I’m flipping a coin. No, I really am. Heads it’s Scott, tails it’s Lisa. OK? Is everyone agreed? OK?

Ivan goes on to predict "tails."

I'm more optimistic. Three out of five came up "heads" for me.
Posted by Philip Munger at 8:22 AM

Good news, but not a reason to rest...

Why assume that the damning news about Joe has dispersed and penetrated as far as it's going to? I see his numbers going nowhere but further down. As they do, those who were voting for Murkowski only to block Joe will start turning to McAdams.

Am I referring to Joe by his first name in contrast to the other candidates out of disrespect? Yes.

If I read correctly on your link, the Hayes Research poll didn't seem to target likely voters. The problem with this would be, not all those folks are likely to vote. Ivan Moore is afraid Miller could win. So am I.

I'm voting for Scott for two reasons- first, there is basically no difference between Murkowski and Miller. Second, people need to realize, Scott really could win: vote for him! I think his chances are better than Lisa's.

I think it's possible Miller will win. Then what? Who deals with him? The US Senate? They can't do anything unless his convicted of a crime.

And we can't recall him. That's why I just gave Scott another hundred bucks. I'm not rich, but republicans can sure make us poor. Just look at the Stock Market during the Bush years. Pay now or pay later.

Vote McAdams...he's got the big mo

Your math escapes me. How can Joe go from 23% to 33.5% with a reassignment of five percent of the votes? Even if all of them went for Miller, wouldn't the highest he could get be 28%?

Then again, math was never my strong point. bt