Don't rob Scott to stop Joe: Moderates should back McAdams 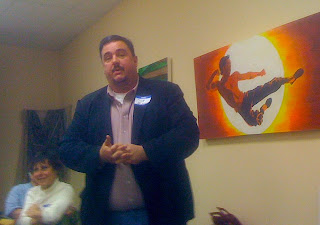 [My friend Dan O'Neill has written a powerful op-ed piece on why we must back Scott McAdams, especially with Joe Miller starting to rapidly lose support]

I’d like to especially address Democrats and moderate independents who are trying to figure out how to vote in the U.S.

Senate race. Most of us broadly in the center, and those of us left of center see Joe Miller as an extremist and the worst choice to be our next senator. But I think it is a big mistake for moderates to vote for Lisa Murkowski. And here’s why: Scott McAdams can win. Polls that show him running several points behind the others have structural flaws. As I understand it, telephone surveys do not call cell phones, which is how you reach young people nowadays. These polls can underreport younger people’s views, and young people often trend toward the Democrats.

Pollsters have been mentioning Lisa by name, whereas the actual ballot will not. I think a truer analysis makes this a three-way race where anyone can win, especially as Miller’s campaign self-destructs. (It’s beginning to look a lot like the 1998 Lindauer fiasco.) Lisa was a moderate during her time in the Legislature. But if you read about her votes as a senator in recent years, you see she is not a moderate. Pick your issue area.

Women’s issues? Lisa won’t quite say whether she is pro-choice, but her votes say plainly enough: According to Pro-Choice America, Lisa votes in support of their interests only 25 percent of the time. Same low rating with Planned Parenthood: 25 percent. She voted to ban access to abortion for women who opt into the new health insurance arrangement; she voted against a bill to improve the availability of contraceptives to women; she voted against domestic violence protection.

Environmental issues? Lisa introduced a resolution (written by lobbyists) and led the Senate fight to gut the Clean Air Act and end the EPA’s authority to regulate carbon emissions. On global warming legislation, a Mother Jones magazine writer calls her the “most effective obstructionist” in Congress.

Alaska projects? Lisa voted against $10 million for the Denali Commission (though, somehow, she takes credit for the appropriation); she voted against erosion control for Bethel; against suicide prevention in the Arctic; against funding for Abused Women’s Aid in Crisis, Covenant House, and Big Brothers and Big Sisters of Alaska.

Lisa consistently voted against moderate positions and in favor of the more belligerent features of the Republican agenda. More than 90 percent of the time this past year she voted with hard-line Sen. Mitch McConnell, including voting against every single appropriations bill — bills that included 89 projects for Alaska that totaled more than $400 million.

No amount of reasoning could induce her to compromise. She wanted a leadership position in the Senate and she spent bipartisanship, compromise, rationality and Alaska’s interests to get it.

And when a right-winger declared against her in the primary, she instantly positioned herself as the shrillest ultra-conservative in the race. Now, for the general election, she re-positions herself as a moderate. Lisa puts Lisa first.

What is the cost of voting for McAdams? Joe Miller might win. And what’s the cost of that? Miller would have one vote in the Senate, as did Lisa. Either way, it’s a lost vote for moderates.

If Joe should get in, judging from the almost daily revelations about him during this campaign, it’s hard to imagine he could last a full term, let alone be re-elected. By contrast, if Lisa gets in, she likely will be there, voting against us, for as long as her daddy was.

I think McAdams’ message is right: Don’t vote your fears, vote your values. This guy’s the true moderate in the race. He ran a terrific campaign, and he’s got a real shot. If he loses, it will be a damn shame if he is defeated by the very people who share his values.
Posted by Philip Munger at 3:31 PM

Scott McAdams is more aligned with what Ted Stevens did for Alaska then Murkowski has proven to be and definitely more than ole' Miller time threatens to be.

NOT refusing federal funding is something that Ted Stevens realized was necessary for Alaska.

The mere physical distance of Alaska requires the strongest advocate that can be elected.

Out of sight, out of mind.

Lisa has been cutting off Alaskans noses to spite her face.

She doesn't suffer, but every ordinary Alaskan does.

Huh, I just got back from downtown Palmer. There are very few campaign signs anywhere! A few Murkowski signs, the usual avid Democrat stand alone, but, I only saw one Miller sign. Only one on the east side of the Matanuska River bridge. Only lonely Don Young's sign up at the end of Clark-Wolverine Rd.. On the way up C-W Rd. to get my mail the Veterinarian's neighbor has a series of signs on his fence imploring "Enough is enough!" "Stop Joe" "Stop Don Young" . . .about 5 in all. Amazing!

What's it look like in your neck of the Valley? Did Miller just pull a Lindauer? It sure would be nice if folks could take off their blinders and stop supporting this dishonorable fellow. I miss Pols like Jay Hammond and Arliss Sturgelewski! Let's make this a two horse race between Lisa and Scott!

I think that it is very true that AK is "noted as an extreme low-information voter environment", maybe less so in the urban context, but this is so in the rural areas where there is general suspicion of government and the media. People buy into conspiracy theories they feel are perpetrated by both government and media. On Facebook, the "young" people who I taught in the past "like" Miller and Palin, and so it goes with this TP core.Hopefully Scott and Murkowski's polling numbers don't neuter each other's and Miller wins.

I was in Wasilla a few weeks ago and it seemed there were Miller signs everywhere. I'll have to ask my Mom if she's noticed them dissapearing as well.

The left and their use of the word "moderate", what a crook of crap!

that should be crock but crook works when speaking of the left, also