Breitbart to Save Joe the Teabagger? Probably Not 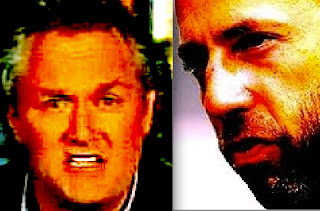 I. Andrew Breitbart, one of the most disgusting personalities to disrupt the public discourse in past decade, is peddling what he claims is proof that Anchorage's KTVA-TV News is trying to make stuff up about Joe Miller:

The voices are believed to be those of the news director for CBS Anchorage affiliate KTVA, along with assignment editor Nick McDermott, and other reporters, openly discussing creating, if not fabricating, two stories about Republican nominee for U.S. Senate, Joe Miller.

Breitbart's biggovernment.com website offers what it considers to be a transcript of the purported buttcall message. They've also posted a youtube of the recording:


I don't trust Breitbart or his staff. They don't have a very good record in terms of presenting fact in many of the stories they have come up with. This may actually be KTVA reporters doing what Breitbart's site purports them to be doing. Or it may not.

II. Meanwhile, Jill Burke at The Alaska Dispatch, has penned what may be her best story yet on the 2010 Alaska U.S. Senate race. Here's an excerpt:

Days before [Miller] was caught using the borough computers for the poll, Miller had spoken openly with members of the borough office about a potential threat coming his way. The Alaska Republican Party was out to get him, Miller told them, and he warned them to be careful about what they did on their computers. Miller claimed a public records request was in the works aimed at scrutinizing employees' computer use, adding that, if granted, he feared it might reveal child pornography on his computer. If any inappropriate material was found on his computer, Miller told them, they needed to know it would be the result of a sophisticated setup -- someone hacking the Fairbanks North Star Borough's computer system and planting inappropriate material on his computer.

It was just a few days later that his colleagues discovered something was amiss with their computers, which upset and unnerved them given the timing to Miller's earlier warnings. Miller had been on their computers during lunch hour to vote in a political poll hosted on his own personal website. When they confronted Miller about it, he told one of his supervisor's, Jill Dolan, "not to worry about it (and) that he was not on a bad site," according to a written statement Dolan provided during the borough's subsequent internal investigation.

Yet, there is no evidence that the prospect of illicit materials existed anywhere but in Miller's fears.

In the hundreds of pages of public records produced by the borough regarding Miller's employment, there is nothing to suggest that the borough ever had concerns about child pornography or other inappropriate material being found on his computer.

My favorite comment on Breitbart's article (at the Sea of Pee):

If it was not obvious before, this should convince those of us who still had doubts that the lamestream media is the hit squad of the Democrat Party. The LSM are cashing in their previous reputation as news organizations to spread disinformation, to malign opponents, and to prejudice public opinion. This is classic soviet propaganda as practised by Joseph Stalin, Maxim Gorky and Vyacheslav Molotov. Alinsky, father of community organizing, was an sdmirer and staunch supporter of Stalin, and Alinsky's Rules for Radicals is a tactical handbook widely used by the Left. To these people, truth has no significance.

Who cares??? Alaska now knows Joe Miller. Joe is an unethical, cheating, self-centered, liar. Nothing or no one is going to change Joe's history. Joe still hasn't proposed any solutions to Alaska's problems. His agenda is a point-by-point copy of the Tea Party's agenda. Joe Miller is no earthy good for Alaska or any elected office.

Seriously, who cares ? Does anybody actually watch KTVA news anymore ?

Do yourself a favor and donate your TV to the Salvation Army, you'll feel better about yourself.

And that little thing about trust ?

Absolutely don't trust anything that Brietbart writes, but take that with a grain of salt, Phil.


The same underlying principles apply whether you or Brietbart are writing the story, but you knew that, right ?

Update: This just in my inbox, from a source connected sometimes to CNN:

“Here’s a quote I got from law enforcement here in Alaska yesterday afternoon regarding Palin “a criminal indictment is pending authorization.”

It doesn't matter how much hate you have in your heart for someone, you still need to check facts before you publish a story.

If Breitbart says something, odds are it isn't true. This is as genuine as the whole "ACORN-Pimp" video made by that punk-ass kid.

KTVA has a comment up on their website now. They confirm the incident, but deny there was any attempt or plan to create news.

Something is seriously wrong with the man. People can still find employment when they have Paranoid Schizophenia/ BiPolar with psychtic features--delusions/mania--plots against him, etc. Sounds like him.

I do believe that there is much the people don't know.

Sorry this is long, but important. Please read.

I encourage you to look up the funding sources (what little we can find) of Freedom Works (http://en.wikipedia.org/wiki/Freedom_Works), one of the key funding sources of the Tea Party Express (including the Tea Party tour bus, a lot of political and strategy consultation, talking points, advertisements). Most of the Political Advertisements are coming in the name of Americans for Prosperity (AFP) (On Wiki http://en.wikipedia.org/wiki/Americans_for_Prosperity and Sourcewatch http://www.sourcewatch.org/index.php?title=Americans_for_Prosperity ) Citizens for a Sound Economy is the parent organization of FreedomWorks and AFP.

Patients United Now (http://www.sourcewatch.org/index.php?title=Patients_United_Now ) , The 912 Project, Patients First -- all funded and promoted by the above tax-exempt spenders who are not accountable to anyone.

Wiki:
In May 2009, Americans for Prosperity launched Patients United Now, a website self-described as a project offering information for those opposed to what they describe as "a government takeover of the United States health care system."[20]


Americans for Prosperity (Sourcewatch http://www.sourcewatch.org/index.php?title=Americans_for_Prosperity ) is quite informative - read the whole thing there.

The AFP is the third largest recipient of funding from the Koch Family Foundations, behind the Cato Institute and the George Mason University Foundation. (see Sourcewatch http://www.sourcewatch.org/index.php?title=Americans_for_Prosperity )

Koch Family Foundations is funded by Koch Industries. According to Forbes, Koch Industries is the second largest privately-held company, and the largest privately owned energy company, in the United States. Koch industries has made its money in the oil business, primarily oil refining. Presently, it holds stakes in pipelines, refineries, fertilizer, forest products, and chemical technology. Americans for Prosperity is also connected to oil giant ExxonMobil. (Sourcewatch)

"COVERT OPERATIONS - The billionaire brothers who are waging a war against Obama"
by Jane Mayer, Published in The New Yorker - Augut 30, 2010
http://www.newyorker.com/reporting/2010/08/30/100830fa_fact_mayer?currentPage=all

Citizens' voice is being coopted by the corporations via Tea Party. People are not realizing that their disappointment and frustration resulting from global economy exerting its forces on THEM VIA GREEDY CORPORATIONS.

Corporations are outsourcing jobs and not bringing back profits to avoid taxes and further investing outside the country...

The oil money and pharma, tobacco and formaldehyde and Chem industry interests have more to gain in fueling citizens to be angered with the government. The rich want to keep reaping the benefits of W.Bush tax exemption and extend it along with tax exemption for repatriated profits.

IF YOU READ NOTHING ELSE ALL DAY TODAY, PLEASE READ THIS:

They are the force behind the Tea Party movement.

I wonder how many Republicans will become disgusted with the Palin/Miller/Murk drama and vote Scott McAdams instead.

Sally, I did read a comment yesterday at the Anchorage Daily News from someone who said they had voted early for Murkowski and wish now they could take back their vote and give it to Scott. I see that as a good sign.