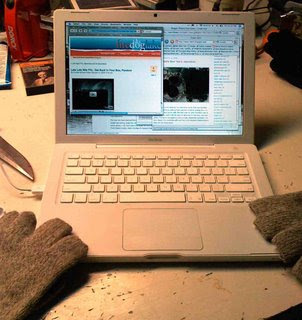 I don't think I've ever been more proud to be an Alaskan, a Mat-Su Valley resident, a progressive Democrat, or a blogger, than this past week.

When the incredibly cynical and desperate choice by the McCain campaign to name Sarah Palin as his running mate was announced, I wondered whether Alaskan bloggers would be able to make an impact on how the pushback would develop. I was concerned that our credibility at large, and the comity within our tight, but growing family, might crumble from the strain. The stresses of this past week, and since August 29th, have been heavy, but instead of starting to flake apart, the opposite is happening.

I was talking to one of my co-bloggers this evening about how we're sharing issues nationally with bloggers who have incredible resources, and have been involved in many progressive campaigns, building the netroots hive mind. A local personality issue came up. My friend fairly shouted at me, "I don't care one fucking bit about that! This is a national emergency. We can't be small-minded. All of us need to work together - it is the only way we can possibly win!"

And he was right. Alaska bloggers, as we cooperate with national online resources, may be having a deeper impact on developing important information on Sarah Palin's vast reservoir of deep shortcomings than our in-state mainstream media will be remembered as having had.

There are several examples, but an excellent case in point is the revival of why Alaska House Bill 270 was necessary. What little reporting in the Alaska media about the reasons for the bill, done at the time of its very public signing, was done by the Mat-Su Valley Frontiersman. The Anchorage Daily News, while mentioning passage of the bill in an editorial at the time, totally failed to inform its readers as to why it was necessary.

It was necessary because Sarah Palin was abusing her office as Mayor of Wasilla. Had the ADN editors and publisher done their job then, we Alaska bloggers wouldn't have to be doing ours now.

The ADN is slowly catching on to the story now, but they're probably too far behind the curve to catch up to our efforts. Over the past week Linda Kellen, Shannyn Moore and I, responding to the breaking of information on this out of state, have been helping to coordinate people with knowledge about this, to help fit this important link into the telling of the story of the development of Sarah Palin's modus operandi. Regarding unlocking the keys to explaining that MO, the ADN is totally fucking clueless, it appears.

I can't write more on what will be emerging next on this, but Linda Kellen had this to say today:

There's an excellent article by Jacob Alberin-Sheriff who I've been communicating with for the past several days. Through his research, he put all the pieces together and found out that Sarah Palin WAS responsible for sexual assault victims having to pay for their rape kits:

It turns out that Wasilla did not bill sexual assault victims for the cost of rape exams while Irl Stambaugh was chief of police. As chief, he had included a line item in the budget to pay for the cost of such exams. He had only just heard about the Mayor Palin/Chief Fannon policy today, and was just as shocked to hear about it as I was.

The Document for the 1998-1999 fiscal year begins with a message "To the Citizens of the City of Wasilla:"

The comprehensive annual financial report of the City of Wasilla for the fiscal year ended June 30, 1999, is hereby submitted. The City's Finance Department prepared the report. Responsibility for both the accuracy of the data, and the completeness and fairness of the presentation, including all disclosures, rests with the City. To the best of our knowledge and belief, the enclosed data is accurate in all material respects and is reported in a manner designed to fairly present the financial position and results of operations of the various funds and account groups of the City. All disclosures necessary to enable the reader to gain an understanding of the City's financial activities have been included. ...

At the end of the letter, under the words "Respectfully submitted," is the signature of Sarah Palin.

Linda, Shannyn, Dennis Zaki, Writing Raven, gryphen, AKMuckraker, Maia and I (and others!) are all doing a lot of, or all of this - depending on which person or story - for nothing, but love of our country, Alaska, our families, and the things in which we believe.

Meanwhile, like every other weekend, the ADN is off, unless the editors and publisher have agreed to pay their excellent writers some OT. As our resources and contacts are rapidly growing, theirs appear to be slowly ossifying, even in this resource-rich environment.
Posted by Philip Munger at 12:47 AM

Let me be the first to thank you and the rest of the Alaska progressive blogger community for everything you are doing and (I know) will continue to do. Alaska blogs are the first ones I read in the morning, the last ones at night. The combination of facts, inside perspective and local history provided by Progressive Alaska, Mudflats, Celtic Diva and others is more than valuable. It is essential. Again, THANK YOU!

Thank you all for your courage and fortitude in your investigative work. I too, check in several times during the day on your reports, always to find new details unveiling abut Sarah Palin. Strangely the ADN has gone very quiet in the last ten days.

Viewing you from a lower 48 state, it's heartening to know some people put America first!

Well done post and of course you are quite correct that many Alaska bloggers have quickly jumped in to fill the gap left by the Alaskan media, who seem unable or unwilling to do there job as it relates to Sarah Palin.

I am very proud to be counted among the other progressive bloggers in this great state, and we are indeed having a national impact.

Keep up the good work.

You owe a nod of thanks to Eric Croft and his staff for getting this story out there as well.

Anon @ #4 - Thee will be occasion to mention Erc Croft very soon. We'll let him explain his case in his own words, we hope.

I'll add that everybody who contributed to getting this story out there deserve to be recognized.

If you submit any of your work for an award, this should bit.

As a progressive Democrat from the mainland, I would like to personally thank the Alaska bloggers for being so forthright with their information about Sarah Palin. Please keep up the incredible work, because what you're doing is part of what will hopefully shape this election and keep McCain and Palin away from the White House.

Thanks and keep it up!

Keep up the good work!

congrats to all y'all for staying on it. we need to get democrats in power and keep them there. and make sure net neutrality continues. as long as we can get the word out this way i am a bit less worried about corporate control of the MSM.