Judy Says "He's So Far Behind, He Thinks He's Ahead!" 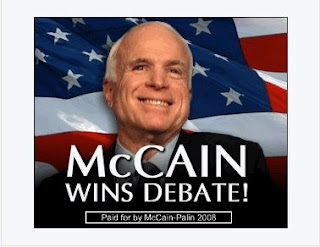 I think the Obama campaign is about to lap the McCain team.

McCain, looking over his shoulder, has announced, perhaps minutes after he decided he had to show up this evening, that he's won an event that hasn't even happened yet.

Great minds think alike, I just posted about that too. LOL!!!! Holy shit, does he even care what he's doing any more??

Someone needs to tell Joe Biden the television wasn't around during the stock crash of the '20s!

And while they are at it teach Obama to talk without saying "uh" every other word. Hell, all he would have to add is "you know" and his crappy speaking ability would be complete...uh...you know...uh...

Did you notice that McBush never looked at Obama? The body language suggested either contempt or fear, neither of which helped McSame.

Indeed, McLame fails bad when it comes to body language. Did you see how he shook his head in an emphatic "no" on 60 minutes while claiming that Ms. Mooseburger was a good choice for VP? The video's on my blog. HE said, "abolutely" over and over while shaking his head know.

My guess is the guy would be a total disaster in a poker game. All his tells are hanging out and tonight - holy shit: He's either afraid of Obama or dismissive. Not good either way.

Funny. I was a 'liberal' in Alaska where I lived for 47 years. Living in London now, I feel quite middle-of-the-road. That difference has left me with a chance to re-examine, rather than react to, my initial take on the presidential debate last night.

McCain actually did well as the expectations here were that he would be overwhelmed by Obama. That didn't happen and it surprised on-line discussion groups.

Obama should be on better ground in the next round. He will need to improve to continue carrying the hope of people I know here in the UK. Right now, there's a bit of concern.

mc cain's general smirkiness and fidgeting and not looking at obama directly for the entire time -- all were really creepy. but he managed to control the debate and jerk obama around a lot. obama will no doubt try to be more proactive next time.
do you think they'll try to cancel biden-palin?