Here are some pictures of signs at Saturday's biggest street demonstration in Alaska history. It was a grassroots event, organized from late Wednesday. It was meant to show the world that Alaska's strong, intelligent women want progress, and don't believe Sarah Palin is emblematic of it.

And Maia at Own the Sidewalk, has more, plus some video.

At Mudflats, AK Muckraker (who has more pics) writes:

This was the biggest political rally ever, in the history of the state. I was absolutely stunned. The second most amazing thing is how many people honked and gave the thumbs up as they drove by. And even those that didn’t honk looked wide-eyed and awe-struck at the huge crowd that was growing by the minute. This just doesn’t happen here.

Then, the infamous Eddie Burke showed up. He tried to talk to the media, and was instantly surrounded by a group of 20 people who started shouting O-BA-MA so loud he couldn’t be heard. Then passing cars started honking in a rhythmic pattern of 3, like the Obama chant, while the crowd cheered, hooted and waved their signs high.

Steve, at What Do I Know? has more pics. The title to his article is:

I've posted a large gallery of photos of the demonstration at my facebook niche.

One very remarkable thing about all these photos, by five progressive Alaskan bloggers, is that there are so very few repeats of sign titles in our images.

Now, had we been concentrating on the GOP Palinbots and their signs, there would have to have been a lot of repeats. Not because there were so few opposition Republican demonstrators there at Eddie Burke's hateful call. It is that their signs were largely manufactured. Those few that were homemade, showed little of the passion and wit, as did those in support of women's rights and Obama. 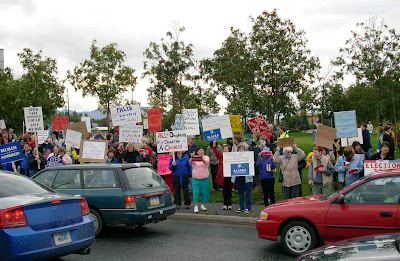 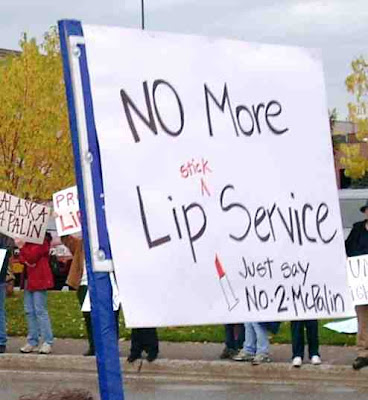 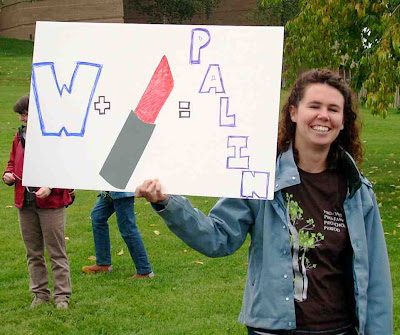 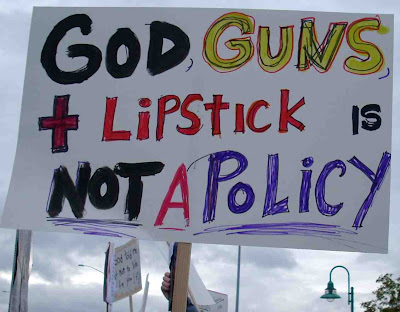 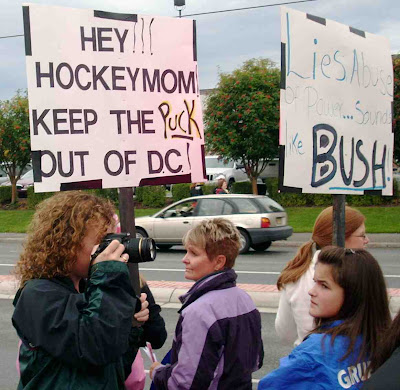 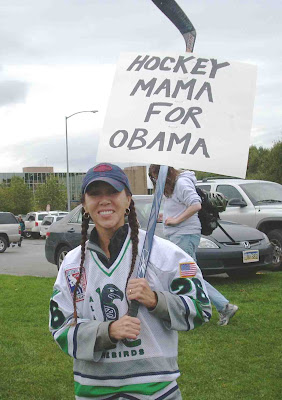 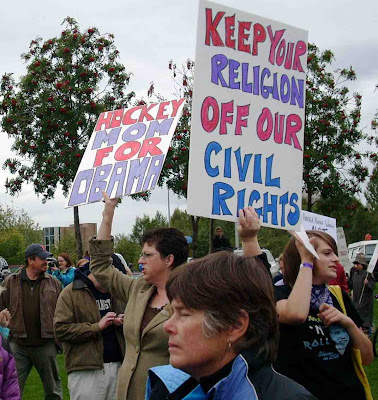 Posted by Philip Munger at 1:09 AM

Bravo! from Florida - I love it, the internet brings the news to you in a click!

What the hell? My kid has a school project due this Friday and I can't find any poster boards or Sharpie markers in this whole damn town! But I'm just kidding. BTW, the thing I despise most about Eddie "the idiot" Burke is that, like Dan "the fathead" Fagan, he loves to whip up sentiment and frenzy when he is partially or totally wrong on the facts, then excuses his errors and ignorance by claiming that he is just a regular guy from Alaska, not some elitist over educated liberal from outside. Stupid is as stupid does, and Eddie Burke does stupid best.

Hooray for all you progressive Alaskans from down here in Houston, where we just got Ike'd...please keep it up until November 4th--all your energy and expression will really pay off! You can't have demonstrations all day every day, so I always encourage freeway blogging (see freewayblogger.com) PEACE!