Posted by MadDog at Campaign Silo, a couple of hours ago:

What is really weird about this, is that even the cached pages on Google for the Wikileaks Sarah Palin hacked emails are gone.

For non-techies, let me see if I can explain this.

Does the word “Conspiracy” ring a bell?

One might logically assume that someone with Federal power intervened at both Wikileaks and Google, and said “shut it down!”.

One might even go further and assume that someone with Federal power said “if you don’t do what we say, we’ll arrest you!”

Note: Earlier in the day, I downloaded the Wikileaks Zip file of the “Hacked Sarah Palin emails”.

After looking at the stuff, I ended up deleting the Zip file and its contents since they were no more than what had been displayed at Wikileaks. I guess I should have kept them for ya’ll. *g*

Additional Note: Wikileaks, at the time the “Hacked Sarah Palin emails” webpage was up, had a “curious” little sentence that said, in effect, “we’re looking through the rest of the emails and should “interesting other stuff” be observed, we’ll post it.”

So, Here some of them go, before they're completely disappeared: 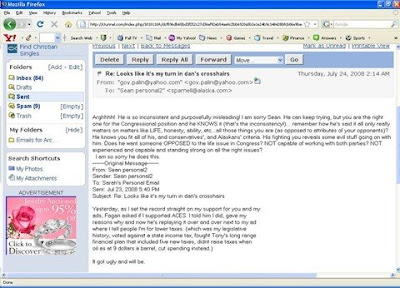 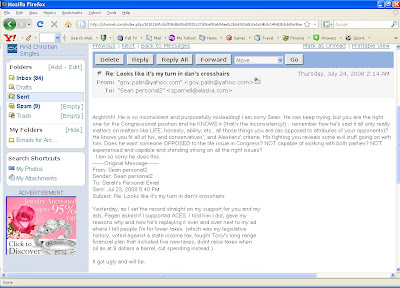 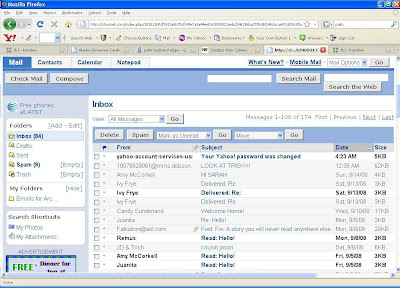 Posted by Philip Munger at 6:58 PM

there's a weird unreality about the yahoo hacking story. it just feels like classic karl rove to me. destroy the real evidence and put the hounds on the wrong track while you're at it.

Nothing but hatchet jobs.[like I figured].Thats all maxist leftists can do. You guys are unelectable so you spread poisen. Swim across the berring boys RUSSIA awaits!

All of the leaked e-mails are still on the net.

If the McCain campaign is really behind the shutting down of WikiLeaks and the other attempts to censor this, they are even BIGGER technology morons than I thought they were.

Here are the e-mails in their full glory.

(You'll need to have a bittorrent client in order to grab the files. There are any number of reputable bittorrent clients. Utorrent, the Opera web browser, and Azureus Vuze are all quality products that support the bittorent protocol and are entirely free of any malware.)

I've been to the Bering Strait. More than once. Not about to leave this place. I love Alaska. I love democracy even more. Trying to get it back. We've got to defeat MOOSElini first, though.

thanks for the link, lacey.

You can get the wikileaks page here:

Or here or here, hell, I even have them stashed here
and here (unzipped)

First, a governor's privacy was not compromised. Rather, a mere private citizen's privacy was compromised. It's beyond laughable that the party advocating domestic warrantless spying would complain about this. Oh, what's that verse . . . reap what yea sow?