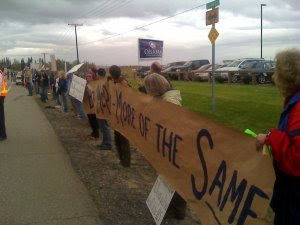 Daniel Gergen says this is just bizarre, they can’t believe that they are staying up till 11:30 PM, east coast time, waiting for a VEEP to arrive on the tarmac in Fairbanks.

So, she gets off the plane. Not that big a crowd to greet Sarah- - my Fairbanks contacts say there is a big anti-Sarah crowd across the road, at Pike’s, with signs.

She says that she is happy she will get to participate in deployment ceremony for Track, and the Stryker Brigade, Now they are all chanting USA USA USA. 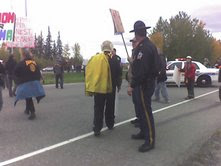 Drill Baby Drill!! Everyone is excited about that! We’ve taken the government and put it on the side of the people….What? what did she do? Get rid of Vic Kohring? Government is not always the answer, Government is the problem, what are we going to do in DC—we are going to do some shaking up in DC. We are going to take out case for reform…… to all voters. With your help, we are going to win. I can’t wait till you meet John McCain—as if he is actually going to visit Alaska, He is amazing friends. He is the only guy who has what it takes.

Now she says that some people did not believe that we could win the war in Iraq. He said he would rather lose an election than lose a war. They are all war mongers! This is amazing.

So when the pollsters and pundits wrote him off…..she is really a good speaker, this is really her standard stump speech. There is a time for politics, and time for leadership. We take pride in our military,….especially here in Fairbanks. Do we ever. 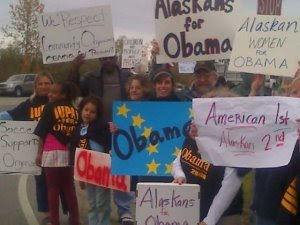 Expand nuclear energy, and we will drill now. For our economic prosperity, and we have it right here in Alaska. Energy independence for our nations will start here in Alaska. Safe responsible development of our resources.

Candy Crowley, basically the stump speech, prime time on west coast, good planning. David Gergen, agrees. And on and on. They never did pan the protestors across the street, and I don’t know if they are going to the Obama press conference. Stay Tuned!

images by cara and anonymous
Posted by Philip Munger at 11:00 PM

So great that you are providing the actual coverage. I have so lost faith in MSM and their one-sided shallow reporting.

I propose a group: National Organization of Men Absolutely Against MCCain & Sarah. The acronym: NOMAAMS.

Get the men involved and call it No MAAMS Land. . .

``People were coming into my office, phone calls were flooding in, e-mails were coming in, 'I just sent money to Obama, I couldn't sleep last night' - from the left. To see this cocky wacko up there,'' Chafee said to laughter."

Barack Obama and Joe Biden have the only credible claim for change. The Obama-Biden agenda will be passed with the willing participation of the Democratic Congress. The practical reality is, John McCain and Sarah Palin will not be able to push one iota of their agenda through a strongly Democratic Congress. All McCain-Palin leads to is four more years of gridlock and fighting, and a public conversation exactly like the current mess.

Thanks for putting this up, Phil. I'm glad you got some alternative coverage from Fairbanks. We're not all in lock step.

All I can say is WOOO HOOO! How nice it is to see those signs in that crowd. I REFUSE to concede Alaska to McPalin!