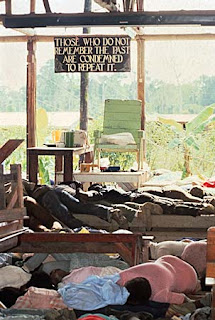 This post is directed to my friend Talis Colberg, who I hope will be returning soon, to announce his resignation as Attorney General of Alaska:

I'm going to be unsparing.

Those of you who still believe there is a remaining shred of credibility in the candidacy of former Wasilla Mayor Sarah Palin, to be Vice President of the United States of America under the oldest President in our history, to initially take that office, well, you need to look at these pictures.

They're from the biggest mass suicide, involving Americans, in our history. It took place in South America, but it had its roots, like Sarah Palin's rise, in the nutty intersection between fundamentalist religious practices and their insinuation into advocacy politics.

I may be the only person alive that has met both Rev. Jim Jones and Gov. Sarah Palin. The similarities are not obvious. But they are real, and to a growing number of informed Americans, they are startlingly frightening.

I met Rev. Jones in September, 1968. He was at an event at a bread factory in Sonoma County California, helping to dedicate its opening. The bread was to be distributed to needy people in the San Francisco Bay area. Unlike Sarah Palin, Jim Jones was a charismatic public speaker. But, like Palin, Jones knew he was on a blessed mission from God Himself.

What brought this old image of Rev. Jones back to my mind, was polling data that has come out in the past 48 hours. In spite of the farce of Palin's projection on the national stage, the obvious over-protection afforded her vulnerable and patently false persona, and revelations about her self-serving and superstitious agenda throughout her public life, Republicans still see her as their Saviour.

In Alaska, according to pollster Ivan Moore, even as Alaskans at large learned from emerging facts about Palin's past, Republicans ignored those facts. Her popularity among "conservatives" in Alaska went from 93% approval to 88% approval during September. So far. And nationally, 76% of Republicans still believe Palin is "prepared" to be President. 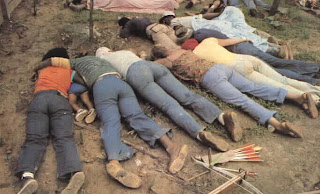 Getting back to the Jonestown image, less than 35 of the 900 people at Jonestown managed to survive Jones' "Revolutionary Suicide" pact. That works out to just under 4%. Palin's popularity has never been quite that high, even among the faithful. But there is a message here.

The Alaska GOP's blind obedience to Don Young, Ted Stevens and Sarah Palin (I could add Rep. John Harris, Randy Reudrich, Rev. Jerry Prevo and others), isn't as irrational as the Jonestown peoples' devotion to Rev. Jones. However, it is simply beyond the pale, at this important time in our nation's and our state's history.

grisly. and thank you.

I don't think this post is going to go over well, but the comparison is entirely valid. If the Iraq War, the pending Iranian/perpetual War, the dismantling of democracy and its institutions in the US, and the economy are indications of anything, it's that America is brainwashed and suicidal.

You are really stretching here now Phil. You are reaching into the smear box for the worst smears you can find.

The only similarity you can find is that Palin and Jones were both from Christian backgrounds. If you really studied Jim Jones you would know that he had been been going off the deep end in paranoia for some time before he brought his flock to their death.

You really owe Palin, and all other religious folk an apology. It would be easy to use the same logic you have here and start making comparisons to Stalin and showing other piles of bodies for any lefty politician.

Some intellectual honesty would be nice. I fear Max is growing on you. I have read his stuff...it is pure propaganda. He is a talented propagandist not a journalist.

anon @ #3 - if you knew what I am learning, thanks to assisting kids like Max Blumenthal and others in their investigations of Palin's long-standing ties to some very strange groups, you would not, repeat, WOULD NOT, be making such a stupid statement as "You really owe Palin, and all other religious folk an apology...."

Frankly, such passivity as you display is a large part of why our country is in such dire shape right now.

Hasn't anyone in Alaska sent out a search party for Talis Colberg?

Philip - you owe NO SUCH APOLOGY. This is the USofFrickinA... land of the free home of the blame er... brave. Why does everyone shy away from criticizing religion and the religious nutjobs behind it?

Anonymous #3... guess what! The right to free speech grant all of us the right to criticize Religion and Religious Nutjobs... even going so far as to say that the US - nay, the WORLD - would be better off if you all just disappeared. Religion has been - and will continue to be - the vehicle for all of the worst atrocities and genocides in the history of mankind. The ethics and morality (which can be found elsewhere aside from the bible or koran or Torah) are moot as a result of the actions carried out throughout history and TO THIS DAY by the religious nutjobs like yourself.

I may not agree with what you have to say, but I will defend TO THE DEATH... your RIGHT to say it.

GE - USMC
National Coalition of US Armed Forces Against the War in Iraq...

Listen...I am not American but Canadian. I have been told recently by many on various blogs..to "butt out!" to put it mildly.

This woman...as a matter of fact McCain as well...scare the crap out of me and any normal thinking person. I happen to live on the same darn continent...our lives are linked in many ways whether we like it or not. I have a right to care what happens in my own back yard.

As Rachel Maddow says..."talk me down". Please tell me that the majority of Americans, whom I know to be bright and beautiful...will NOT vote this ticket.

I didn't say Phil didn't have the right to criticize...but this particular criticism is unfair.

I could make many of the same types of flames. We could talk about the garbage sacks full of dead babies caused by votes of the likes of Obama, Begich, and so on.

Comparing Ms. Palin to Jim Jones is really hitting a new low for you, Phil. Your over the top rabid emotions are obscuring whatever reasoned comments you might make. If you want anyone to take you seriously, please, avoid this sort of froth in the future.