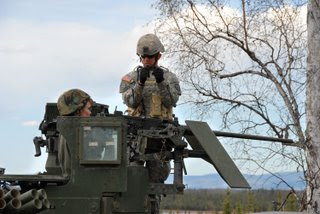 Word on the streets is that the Fairbanks Daily News Miner will be barred from attending the scheduled appearances of Sarah Palin here in Fairbanks. No word yet if the local men in black and the Fairbanks police department plan to pull a St. Paul on the protesters that are planning to picket some of the venues of her visit.

Where's the luv, Sarah? Not a very fine way to treat the folks who voted you into a position that enabled you to craft a piece of family-values/soccer mom fiction that is every neo-con's wet dream.

And Josh Marshall at Talking Points Memo has come up with an excellent Palin-on-the-BTN timeline:

Sometimes when you've got a liar as big as Sarah Palin on the line only a timeline will really do justice to her fibbing ways.

So a lot of you have written in to ask: Okay, she says she said 'Thanks. But no thanks' to the Bridge to Nowhere. But how exactly did it all come out? What's the order of events? Well, briefly, it went like this.

Actually, Congress put the kibosh on the Bridge to Nowhere back in November 2005. Since Sen. Ted Stevens (R-AK) was then head of the Senate Appropriations Committee he was able to force a compromise in which the earmark for the bridge was killed but Alaska got to hold on to the money -- some $442 million of federal tax dollars.

Fast forward to November 2006. That's when Sarah Palin was running as a staunch supporter of the Bridge to Nowhere -- that is, after the feds had themselves already said 'No Thanks.'

In 2006, the Democrats took over both houses of Congress. So by the time Palin got into office it was clear that not only was the first Bridge earmark killed but that Congress was not going to be ponying up any more money. That meant that Alaska was going to have to pick up the tab all on its own. So since she couldn't pay for it with the federal pork barrel, in September 2007, Palin officially halted the project which was then a state project since Congress had said 'Thanks. But no thanks' two years earlier.

She couldn't say 'No Thanks' because Congress had already said 'Forget It'.

So the money Palin sent back to Washington? Well, she didn't. She kept the money for other bridges and roads in Alaska.

So, to boil it all down, Congress pulled the plug on the Bridge to Nowhere in 2005. Palin was still for it in 2006. And when she finally ended the project because Congress had cut off funding, instead of saying 'No Thanks' she actually said 'Thanks!' because instead of sending the money back to Washington she kept it all in Juneau.

Good summary of the Bridge to Nowhere fiasco but it's even worse:
From the Anchorage Daily News:

Alaska "is continuing to build a road on Gravina Island to an empty beach where the bridge would have gone -- because federal money for the access road, unlike the bridge money, would have otherwise been returned to the federal government."

The state is building a road to a bridge that doesn't even exist for $24M. Who's paying for it? You and me.

We are beyond the ridiculous here. It's utterly surreal.

Update: flicthebic confirms by telephone that the Fairbanks News-Miner HAS NOT BEEN INVITED to the big Palin event in Fairbanks.

thanks, Josh!
Posted by Philip Munger at 9:36 PM

This Sarah Palin is nothing but a fool at best.

She says that rape victims must pay for the rape kits and all related medical expenses.

The rape kits are only one tid bit in her fascist views on "family values". This Nazi will stoop to ANY level to overturn Roe VS Wade.

Sarah Palin is a "Pig with lipstick" not a sow, but a NAZI PIG.

Meanwhile; back in the US Department of the Interior: it has come to light that department employees were literally in bed with big oil having illicit sex and doing illegal drugs as favors for fixing contracts. These deviants are operating under a REPUBLICAN ADMINISTRATION. Who has Sarah Palin gone to bed with? Who has John McBush gone to bed with? These scoundrels are most definitely in the pockets of big oil, and undoubtedly: doing drugs and having sex with big oil executives.

Both are quite capable of marital infidelity. Both have already been there.

Is this the best the Republican party has to offer?

If Palin is enough to give McCain the presidential victory, then American is as good as brain-dead.

It'd mean that either we're dumb enough to let election after election to be stolen (electronic voting machines), or else we actually fall for this superficial crap that people like Palin & McCain are pulling.

Great post - I fully expect Palin will set off some major international scuffle with her hubris before the election. After that, not even the moose will pay attention to her.

Check this out :::
Sarah Palin as Mooselini Tshirts, pins and stickers.