How the New Communication Paradigm in Alaska Works 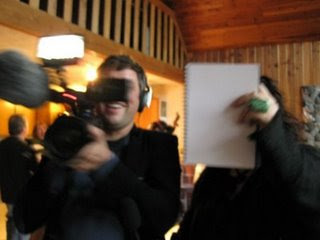 Judy and I have met a lot of wonderful reporters and authors from around the USA and UK these past two weeks. We missed a lot of them too. And, like many informed Alaskans, we've dealt with e-mails and phone calls. Enough to eat up months of rolled over cell phone minutes.

Last Friday, we met with the man who started Salon.com, David Talbot, after Mr. Whitekeys' benefit for the Friends of Mat-Su. We invited him out to our house on Neklason Lake for dinner on Sunday. Then I met Michelle Goldberg, whose work for Salon and for the Nation has attracted my past interest, at the pro-woman demonstration at the Loussac Library. She's a former colleague of Talbot's, so she got an invite too. And Steve Braun from the LA Times hoped to make it too.

David and Steve got way busy, Sunday, finishing interviews, meeting deadlines. They couldn't make it. Michelle did though, and a UK Channel Four production crew came out. A whole bunch of progressive Alaska bloggers came over.

Judy and I fed them Copper River King and Sockeye salmon, home-grown potatoes, beets, carrots, basil, mint, tomatoes, garlic, broccoli and so on. Over food, drink and polite conversation, for over five hours, we shared information with Michelle and the British reporters. I wish more Alaska progressive bloggers could have been there. This was, however, perhaps the first meeting of a new working group. Judy and I were so happy to kick it off in such a striking way.

What Do I Know? Steve, Celtic Diva, Writing Raven, Gryphen, AK Muckraker and Shannyn Moore all spent time with the film crew. Dennis Zaki escaped from editing video, for a few minutes. They also interviewed Howard and Darlene Bess, who once again graced our home.

I'm hoping we can all get together again soon, along with Maia, E. Ross, Clark, Ishmael Melville, and the wonderful Fairbanks bloggers. And Jeremy Lansman! We've got a lot of work to do.

image by Steve
Posted by Philip Munger at 6:08 AM

this thread and the one below it are pretty interesting. i'm sure the ADN editors are reading it and paying attention.
one way we could steer the media ship into a new age of greater enlightenment would be to cooperate with these guys better. by now they should have made the adjustment and realized in the internet age they're to some extent just another web site -- a lot different than the old days when their job was a lot more crucial. i've been intensely critical of dougherty and zencey in the past, too [particularly about the debut of fagan]. and you're right that they don't usually seem like they're deserving of inheriting the mantle of the scrappy, visionary daily news of the '60s and '70s. but mc clatchy isn't so bad, IMO. their propping up ADN in the '80s and '90s meant that it survived and the times didn't. i recall writing to them at one point and strongly suggesting they make dougherty the editor. he was previously passed up twice for that promotion, mc clatchy imported editors who ended up not liking it here. why not give the local guy a shot? mc clatchy also bought the remains of knight-ridder, one of the few major news organizations that was doing pushback on iraq early on. [zencey might have called it 'advocacy journalism', eh?] there's a lot that bloggers and ADN editors could learn from each other. when they ran my compass piece the other day about the community organizer, they took my rather sloppy, rambling rant and turned it into a succinct and grammatically correct piece without changing the intent an iota. it was marvelous and i wish there was someone doing that for me all of the time. with all the good work bloggers are doing, it's painful to trip over misspelled words and miscellaneous incoherence. one reason mudflats has done so well lately is she has a writing background, and makes her points clearly and economically. maybe ADN could teach us how to edit and we could teach them how to be more fearless and persistent.